Clip & Save! Your Handy Wonkette Review Of (Part Of) Dana Loesch's New 'Book' 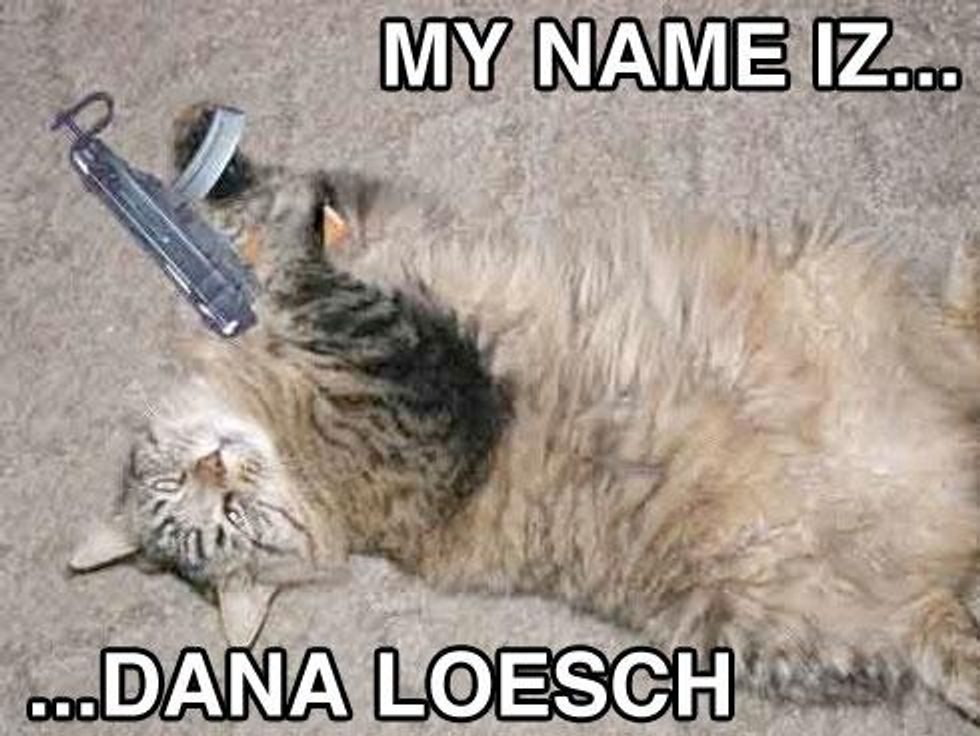 We were planning to review for your enjoyment Amazon’s free preview of Dana Loesch’s new book-like substance,Hands Off My Gun, because who doesn’t want to spend a nice afternoon slogging through a piece of writing that is one step removed from the crude etchings some Neanderthal left on the wall of a cave ten thousand years ago. It would be impossible to be more generous than that to Dana even if we didn’t already think she is an insane ball of white-hot derp.

As we expected, this is not a book written to convince anyone who is not already a true believer, or to advance an argument in a thoughtful and cohesive manner. Rather, it is a cynical attempt by the right-wing imprint of a major publishing house to score some dollars off the endless wingnut appetite for rage against all the bogeymen Loesch mentions just in the first twenty or so pages: gun grabbers, union thugs, Michael Bloomberg, Moms Demand Action, the Tragedy Caucus in Congress that wants to disarm all the great patriots like Dana Loesch.

Here, for example, is Loesch on President Obama after the tragic slaughter in Newtown in December of 2012:

The stage he chose for his latest act of taking away Americans’s (sic) freedoms? A prayer service. Yes, while moms and dads were mourning murdered loved ones, Barack Obama was practically standing on top of the coffins with his insincere grin and his teleprompter, ready to realize his lifelong dream of disarming any American who opposes him.

As we recall, in the wake of the massacre quite a few of the Newtown victims’ relatives, along with 90 percent of the general public, joined Obama in his calls for doing something about America’s eternal hard-on for guns, guns and more guns. (We’re betting you won’t see that stat written down anywhere in this book.) But what else could one say about this? Where to start? With Loesch countering what she sees as Obama’s inappropriate timing by making a teleprompter crack? With the paranoid and totally unsupported statement that the president’s lifelong dream is to disarm Americans who oppose him?

This is not an argument. It is the work of someone whose ranting, forty years ago, would have been distributed only on badly mimeographed flyers handed around outside a meeting of the local chapter of the John Birch Society.

That passage raging at the gun grabbers after Newtown, by the way, is preceded by Loesch’s recounting of her own reaction to the shooting the day it occurred, how she had to set aside her own feelings as a mother of young children to try and be a professional broadcaster as news reports were rolling in. How she slept that night in her younger son’s bed with her arms wrapped around him. Yr Wonkette has school-age nephews who live 20 miles from Newtown and we can empathize with what Loesch and parents everywhere felt that night, since our closest family members were feeling it.

That other mothers and fathers might have a valid argument when they reacted to the tragedy by saying “Why the fuck are semi-automatic rifles so widely available in this country and what sickness of the American mind has so deeply infected our culture that people, particularly the already mentally disturbed, think picking one of them up and shooting up the nearest mall/movie theater/elementary school is the solution to their perceived problems?” never seems to occur to Dana Loesch.

Further on, here’s some good concern-trolling. Discussing Dianne Feinstein’s pro-gun control positions and how a nutbag with a gun was the reason the current United States senator became the mayor of San Francisco after the murder, Loesch says,

Milk is one of many examples of why people, gay Americans in particular, shouldn’t be disarmed.

We don’t know what Harvey Milk’s particular position was on gun control. We’re betting he might have had some strong opinions about gay marriage. Anyone want to guess where Dana’s convoluted and torturous logic on same-sex marriage leads her in this editorial from last year? Here’s a hint: Guns for gays, yay! Marriage for gays, no! (Same-sex couples “entering into contractual agreements” with each other is totally fine though, you lucky romantics.)

There is so much more, and we’re not even going to wade into the controversy over Loesch butchering quotes from the Founding Fathers to support her positions. We will say that a “legal read” is not the same thing as a fact check. The publishing house’s lawyers are not going to concern themselves with the Founders rising from the dead to sue you for inaccurately quoting them, and publishers don’t employ reams of fact checkers because to do so would cost a pile of money. So they rely on the authors to be accurate.

There is Loesch’s tone of strident defiance mixed with wounded surprise that anyone thinks she is ever shrill or unreasonable, which is undercut by her gratuitous and not-at-all-inflammatory slams on Al Sharpton (“a man supposedly of God who I personally believes reaps money off the backs of the minorities he hustles into the hurt-and-rescue tactics of the grievance industry”) for not coming to the defense of Kenneth Gladney after his “beating” during a congressional town hall in St. Louis in 2009. (Never mind that the right-wing fever over Gladney’s story has been thoroughly debunked.) There is Loesch’s rewriting of the history of her firing from CNN – she was too “uncomfortably and unabashedly conservative” for the executives there as a contributor and didn’t like her as a guest because “heaven forbid someone doesn’t verbally fellate Karl Marx” on the air. Nothing at all about cheering for our soldiers overseas to drop their pants and take golden showers on the corpses of dead Muslims, Dana? We’re pretty sure that, and not your unwillingness to blow the corpse of Karl Marx, had something to do with CNN eventually deciding you weren't worth it, what with them hoping to get decent people to watch the network and all.

Mostly, though, this entire read made us sad. Sad for the rubes who will actually drop $25 on the hardback of this huckster’s ranting. Sad for Dana Loesch, who comes off as paranoid, shrill, dishonest, half-bright, angry, manipulative, nasty and close-minded. Above all, we are sad for our country, which cannot have a reasonable exploration of solutions to our gun fetishism that could at least save some of the 30,000 people who die from gun violence every year. We guess those thirty thousand are a small price to pay for Dana Loesch so she can own all the handguns and AR-15s she needs to feel safe from whatever shadows she sees threatening her from every direction.