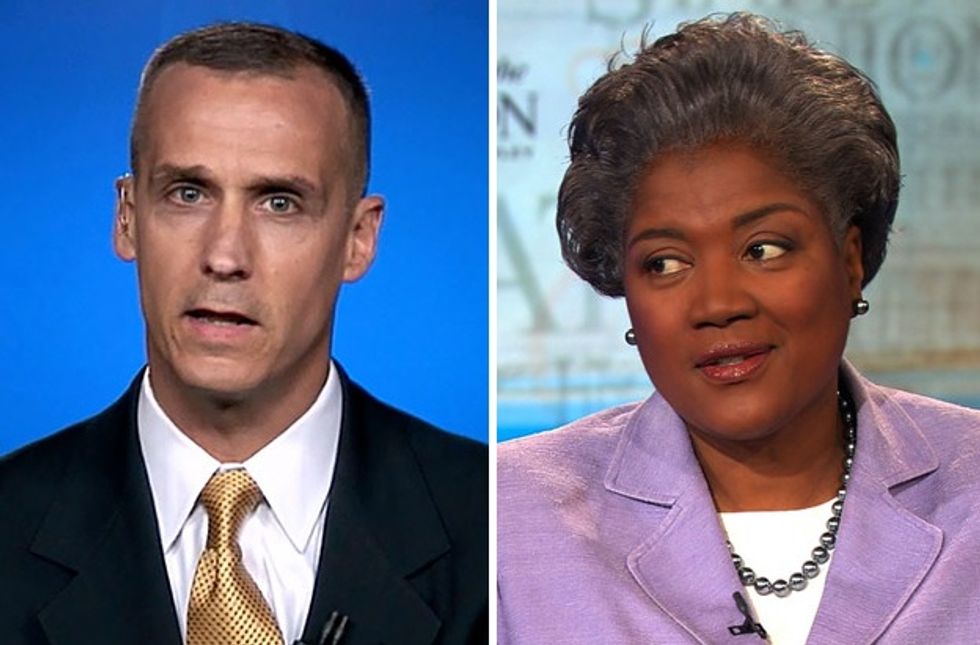 Big media newsiness Monday! CNN announced it had permanently "severed ties" with commentator Donna Brazile following Wikileaks's publication of emails showing that Brazile had given Hillary Clinton's campaign questions prior to a Democratic primary debate and a town hall. Brazile had already been suspended as an on-air "expert" after becoming the interim chair of the Democratic National Committee in July.

Yr Wonkette doesn't really have a problem with CNN's showing Brazile the door, because giving Clinton any questions in advance was a dick move -- and frankly unnecessary, since Clinton's staff was not exactly bereft of media people who could help her prep for the debates. For Crom's sake, Brazile emailed the Clinton campaign prior to a debate in Flint, Michigan, that a "woman with a rash" would be asking Clinton a question:

“Her family has lead poison and she will ask what, if anything, will Hillary do as president to help the ppl of Flint,” read the email found in Podesta’s account.

Seriously, there was a debate coming up in FLINT GODDAMNED MICHIGAN and Brazile felt the need to give Clinton a heads up there'd be a question about lead? Next we'll learn she tipped off Clinton that at some point in the debates, someone might bring up email or Syria. Again, we're not excusing her; if anything, she should have been smarter than to "leak" something so utterly obvious. Yr Editrix believes Brazile was simply excited to be "in the know" -- I know a SECRET SCOOP! Thanks, Donna. And when we go to Miami we'll get a question about the sea level rising, right? (Hahaha, we are joking you! Nobody in the media has thought to mention global warming!)

Frankly, we'd expect better of Brazile, so shame on her. No, this does not mean that a week before the election we need to dump Hillary and nominate Bernie. Really.

The weird thing, as everyone keeps pointing out, is that while CNN said it's "completely uncomfortable" with the information in the hacked emails -- which we are, too, in case you missed it! -- the network has kept "former" Trump campaign operative Corey Lewandowski on staff. Yes, even though FEC filings show he's still drawing a paycheck from the Trump campaign -- one of the lucky few, we assume -- and has been traveling with his "former" employers as recently as mid-October. Just the week before, Lewandowski had said on CNN, "if I was consulting Donald Trump right now..." and talked about what he'd suggest to Trump "as a private citizen."

So yeah, Brazile was too uncomfortably cozy with the Clinton campaign in the spring, but Lewandowski is just a private citizen who travels around with the candidate a few weeks before the election? That seems a little double-standard-y, but it may not really make any more difference than Brazile sharing a softball question with Clinton -- you probably could have handed Donald Trump all the debate questions in advance and he still would have gone off on insane tangents about, because that is simply how he do.

In conclusion, let's talk about email some more.