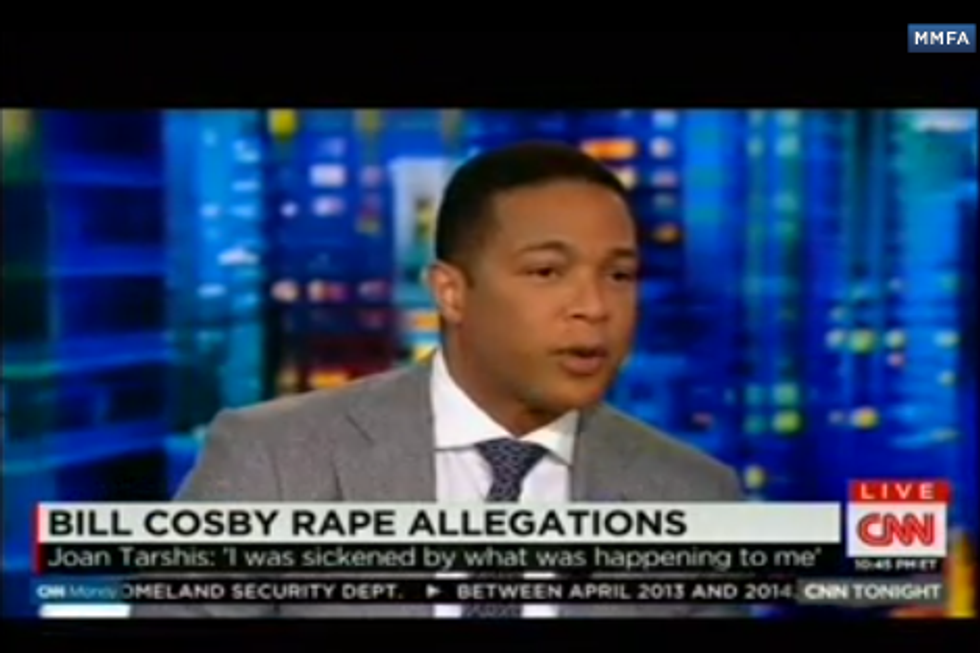 NOTE: Just so you know, we're going to talk about dick-biting. This is not by choice; it was forced upon us by CNN's Don Lemon. So if you have a problem with dick-biting, you should lay back and think about the weather, because it turns out that dick-biting is also an excellent way for women to prevent rape. So really, this is a Public Service Announcement, and if you are someone who would like to not be raped, you need to keep reading. It's for your own good.

It's been decades since the first woman accused Bill Cosby of raping her. And the second woman and the third woman and the fourth woman ... and what are we up to now? Fourteen? Fifteen?

Some of these allegations are old -- which, according to Rush Limbaugh and Howard Kurtz and Cosby's own PR team, means they are irrelevant. Really, this is all just a liberal war on poor Cosby, who has criticized black Americans and thus placed himself on the George Soros-sponsored Liberal List of Targets Liberals Will Target For Destruction Eventually Even If We Have To Wait 10 Years Because Liberals Are Terrific At Long-Term Planning Like That. (We're working on a a shorter name. We'll get to it ... eventually.)

It's "old news" that Bill Cosby maybe drugged and raped a bunch of women, but for some some strange reason -- because men are now talking about it, that's why -- the media is suddenly like, "Oh! Huh. Did Bill Cosby rape more than a dozen women over the course of decades? Maybe we should look into that!"

No hurry, fellas. Really. Let us know when it's a good time for you. Perhaps during a commercial break while your favorite sportsball team is chugging some Gatorade. Whenever.

Fortunately, CNN's Don Lemon has decided he's on the case. That would be the same Don Lemon who suggested that beating kids is a pretty good form of discipline, because it works on dogs and it worked on slaves. He also, in his capacity as someone who works for "the most trusted name in news," asked if the mysteriously disappeared Malaysia Airlines flight MH 370 could possibly have been swallowed by a black hole.

Given his history of being a) A Idiot and b) A Fucking Idiot, you just know Lemon would handle the topic of rape with none of the seriousness it deserves when he invited Joan Tarshis, one of the many women alleging she was raped by Bill Cosby on more than one occasion when she was 19, onto his show -- not once, but twice -- to ask her to prove to him that she wasn't lying. That's journalism for you.

LEMON: You do know, as we mentioned last night, there are a lot of people who don’t believe you. And they say why didn’t you go to police? And why would you put yourself in a position to be with him a second time if he had raped you once?

Let's pause to reflect for a moment on how perfectly Don Lemon demonstrates exactly what is wrong with our national "discourse" about rape. It's that one special crime where the "obvious" first question is to the victim: Why did you let that happen to yourself? If you really didn't want to be raped, wouldn't you have done things differently? Come on, lady, admit it -- isn't this kind of your fault?

You'd think this is the part where we talk about dick-biting, because it sure would seem justified, but no. Not just yet.

TARSHIS: Well, I didn’t go to the police because I was 19 years old. I was scared. And I thought nobody would believe me. I’m a 19-year-old girl and he was Mr. America. Mr. Jell-o, as I called him. Why would anybody believe me, take my word against his word?

So a 19-year-old girl did what most 19-year-old girls in her position do: nothing. She kept it to herself. Most rapes are not reported because, among other reasons, women are scared and think no one will believe them and that they might end up having to answer a stupid question like "Why did you do this to yourself?" And no, it isn't easier to report it when the alleged rapist is America's (Only) Favorite Respectable Acceptable Black Man on TV.

LEMON: Because I know some of you -- and you said this last night, that he -- you lied to him and said "I have an infection, and if you rape me, or if you do -- if you have intercourse with me, then you will probably get it and give it to your wife."

LEMON: And you said he made you perform oral sex.

LEMON: You -- you know, there are ways not to perform oral sex if you didn't want to do it.

Please lean in closer now, ladies. This is the moment when finally -- finally -- we learn the secret to how we can avoid getting ourselves raped. Thanks to Don Lemon.

TARSHIS: Oh. Um, I was kind of stoned at the time, and quite honestly, that didn't even enter my mind. Now I wish it would have.

LEMON: Right. Meaning the using of the teeth, right?

LEMON: As a weapon.

TARSHIS: Yeah, I didn't even think of it.

WHY DIDN'T YOU BITE HIS DICK?

That's where we are in America today, folks. If you didn't want Bill Cosby to rape your mouth, why didn't you bite his dick? Sorry to be crude, but "people" are asking, and as a reporter, Don Lemon has on obligation to get to the truth. If this woman is going to have the audacity to say that she, like more than a dozen other women, was drugged and raped by Bill Cosby, she'd better have a damn good explanation for why she didn't stop him. Doesn't she know her teeth are a weapon? Doesn't she know there are ways -- crude ways, sure, but ways -- to protect yourself from having a cock shoved down your throat, if you really don't want it there?

But we're going to leave that to the other feminists and pick up where Don Lemon left off, now that we have an addition to the standard procedures we've all been taught to follow: don't ever leave your house because then you're just asking for it; don't ever wear clothes of any kind with RAPE ME printed on them; don't drink beverages in the presence of men; don't have consensual sex with anyone, ever, because then the memo goes out that you will have sex with anyone at any time.

If you happen to have somehow failed to follow these simple guidelines, remember that your teeth are a weapon, ladies. A dick-biting weapon. And if you really don't want to be raped -- like, really really, because sometimes you know you sort of do want to be raped, which puts a lot of pressure on men to have to figure out what you really want -- feel free to Just Bite His Dick.

It's the fail-safe move that's guaranteed to work. And since rape prevention is about so much more than just saying "no" in the moment -- it's about how we live our entire lives from the moment we have the misfortune of being born without penises -- there's no reason to wait to Just Bite His Dick. The moment you meet a man you think might feel invited to rape you, you know what to do. Just Bite His Dick. To be on the safe side. To send the message loud and clear, from the beginning, that you really don't want to be raped, and you've got teeth, and you're not afraid to use them.

Sure, this might seem extreme. But since it falls to us ladies to prevent our own rapes, we have to assume the responsibility for stopping rapists by any means necessary. Because otherwise, as Don Lemon points out, aren't we kind of asking for it?

Don't wait until it's too late, and you're defending yourself on CNN. You don't want to take chances when it comes to preventing your own rape. Spread the word. Tell your friends. Here, we'll even give you a hashtag. #JustBiteHisDick. Better safe than sorry.