Colorado District Decides It's OK With Real History After All, Keeps AP Classes 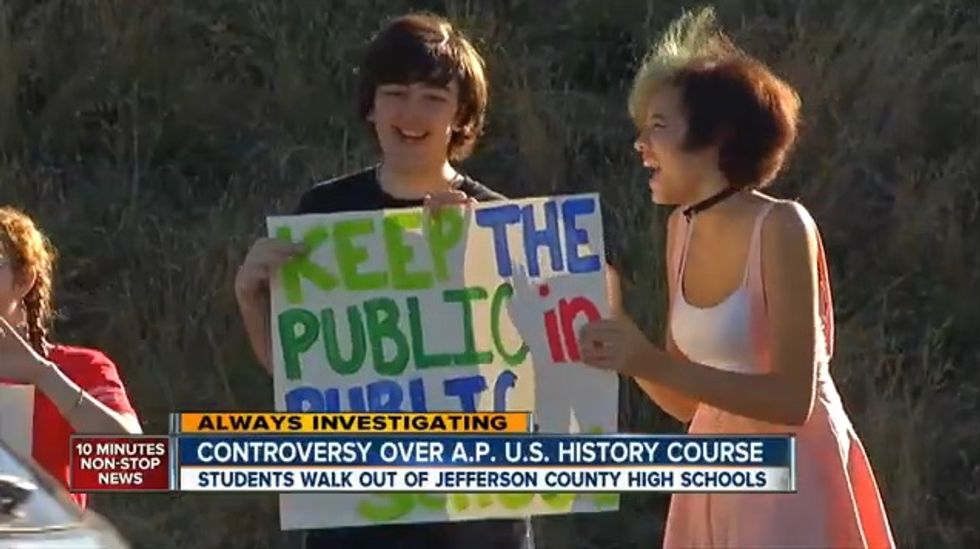 Finally some Nice Time from the War On Advanced Placement U.S. History! The Jefferson County school board in Colorado has decided to cancel its plans to review the APUSH framework, apparently deciding that it didn't want to be in the same anti-education club as Georgia and Oklahoma. Jefferson County had made news four months ago when students walked out of several Denver-area schools to protest the board's plan to review all curricular material to make sure it would "promote patriotic material, respect for authority, and the free-market system." That proposal was eventually watered down to eliminate the more censorship-y parts, and now the board has decided to drop even that review. It will go ahead and implement the College Board's revised framework for APUSH, which became a rightwing Culture War fetish in several states after the Republican National Committee decided the new standards didn't love America enough.

“I’m confident that the public outcry both locally and nationally, pressured the college board to correctly take a view of their own framework and revise it appropriately and we’re delighted that they chose to do that.”

In reality, the College Board hasn't made any changes to the new framework, but if proclaiming victory helps Witt and other conservatives on the school board feel better about things, we're all for that.

So congratulations to all the kids who walked out and protested -- looks like you won a round, and learned that despite the original proposal's plan to quash lessons about “civil disorder, social strife or disregard of the law," sometimes a lot can be accomplished by raising a little hell. Good on ya. Now put away your damn snapchat and study, will you?

Meanwhile, over on Fox News, the Brain Trust that is the cast of Outnumbered had some thoughts on Advanced Placement U.S. History, too, ranging from Judge Andrew Ferrer's heretical view that students should learn American history, warts and all, to Kennedy Montgomery's perfectly mainstream suggestion that public schools be abolished altogether, to Andrea Tantaros's centrist (relatively speaking) view that the pernicious influence of liberals must be rooted out of the curriculum:

[It] seems to me that the universities have always taught this sort of "Let’s apologize for all of the wrongdoing and the boar-headedness — boorish behavior of the United States of America” ... It seems that’s trickling down to our kids’ level. And that is a problem.

We are so behind so many countries in math and science. They are not even getting the basic education because they are getting this meaningless liberal crap everyday!

So that sounds like a reasonable plan, too -- no apologies, more math and science, and no boars' heads, which we take to be either an objection to the use of Lord of the Flies in English classes or a call for the elimination of premium lunchmeats. Masochists can watch the video if they are so inclined:

On a more cheerful note, Yr Dok Zoom was pretty darn chuffed Wednesday evening to see that MSNBC's All In with Chris Hayes had borrowed (with credit, even) our very own dopey "Tea Party Crossing the Delaware" graphic for their segment on Oklahoma's anti-APUSH bill. Lookie!

That was even better than getting our name in the paper for organizing the 8th grade carnival! (It was kind of a lousy carnival.)