Colorado PSA: Don't Eat All The Pot Candy Like That Idiot MoDo 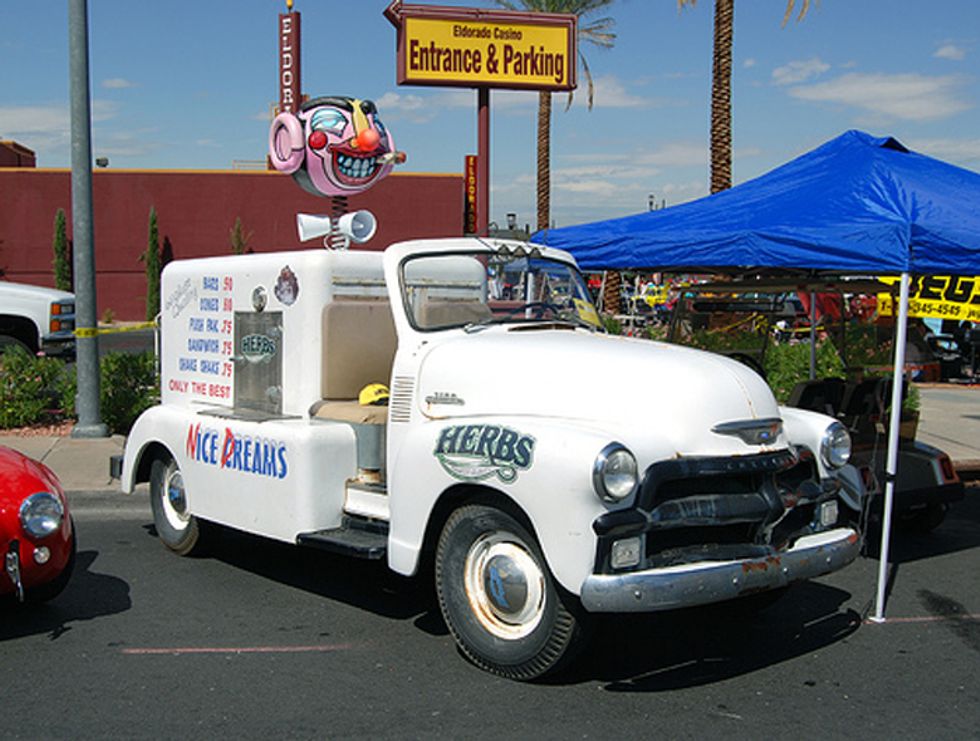 Thank god, a Maureen Dowd column has finally resulted in something good for the world. After shechowed down on a pot candy bar and got super-hiiiiiiigh -- very unpleasantly so -- the legal marijuana industry in Colorado has referenced her "bad trip" column as part of an advertising campaign promoting Safe 'n' Responsible doobage.

Without specifically naming Dowd, the Marijuana Policy Project, which the AP says is "the nation's biggest pot-policy advocacy group," will put up a billboard in a Denver neighborhood with several legal pot shops. The ad shows a red-haired woman on a hotel bed with her head in her hands, with the slogan, "Don't let a candy bar ruin your vacation. With edibles, start low and go slow."

Not that Yr Wonkette would ever condone actual vandalism of the sign, but we would love to see some photoshops of possible third lines to that image, perhaps ending in "MoDo," perhaps not. Send your Image Manipulations to tips at-sign Wonkette dot Com. Let's see how we can improve that puppy. Winner will get a shiny new Wonkette totebag, for reals.

The legal recreational marijuana industry is punching back against a state-sponsored publicity campaign warning against irresponsible marijuana use:

One of [the ads] is intended to prevent stoned driving and shows men zoning out while trying to play basketball, light a grill or hang a television. Many in the industry said the ads showed stereotypical stoners instead of average adults.

Even more concerning to activists is a youth-education campaign that relies on a human-sized cage and the message, "Don't Be a Lab Rat," along with warnings about pot and developing brains.

The cage in Denver has been repeatedly vandalized. At least one school district rejected the traveling exhibit, saying it was well-intentioned but inappropriate.

"To me, that's not really any different than Nancy Reagan saying 'Just Say No,'" said Tim Cullen, co-owner of four marijuana dispensaries and a critic of the "lab rat" campaign, referring to the former first lady's effort to combat drug use.

Instead of scaring people, the industry-sponsored ads are attempting to mimic the alcohol industry's "enjoy responsibly" ads, depicting the healthy, happy, and safe consumption of marijuana by happy photogenic yuppie scum. The goal is to advise safer usage while avoiding stereotypes of potheads as the burnt-out hippies and wasted jazz criminals all decent people know them to be. The emphasis on edibles has been driven by several reports of new users overdoing it, as Dowd did (after reportedly ignoring advice to not eat the whole friggin' candy bar, which is indeed a very bad thing):

"I think the word has gotten out that you need to be careful with edibles," said Steve Fox, head of the Denver-based Council for Responsible Cannabis Regulation.

The group organized the "First Time 5" campaign, which cautions that new users shouldn't eat more than 5 milligrams of marijuana's psychoactive ingredient, or half a suggested serving.

The campaign warns users that edible pot can be much more potent than the marijuana they're smoking — and that the pot-infused treats on store shelves are much stronger than homemade brownies they may recall eating.

So yes, Coloradans and Washingtonians and Rastafarians: Consume responsibly. Enjoy in moderation. Get nice and clean for Gene. And whatever you do, don't write Maureen Dowd / My Little Pony shipping fics while you're stoned. The results could come back to haunt you. We hear.