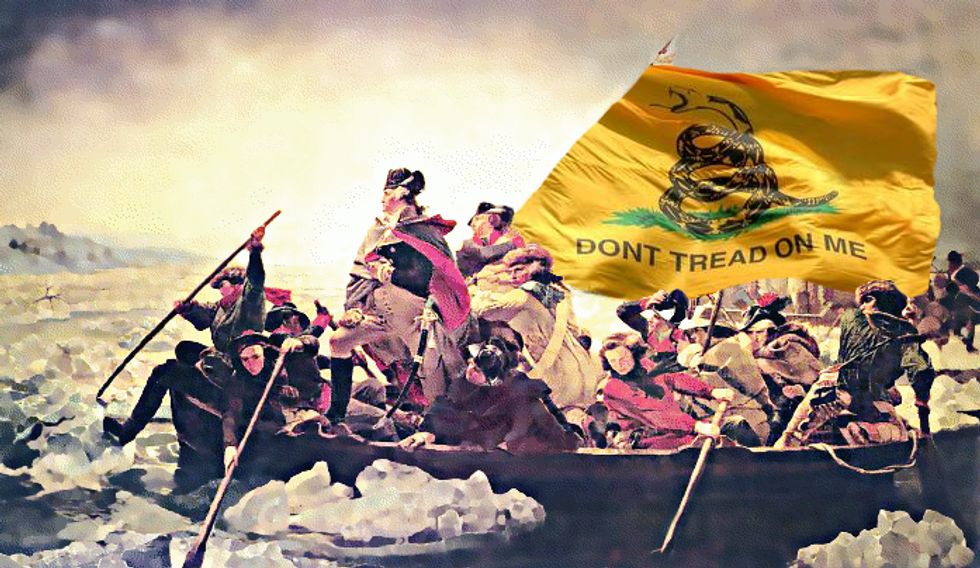 Students at several Denver-area high schools walked out of classes Monday and Tuesday to protest a proposal by conservative school board members to make the district's Advanced Placement U.S. History classes more patriotic and America-loving. The board, sharing widespread concerns that revisions to theAP US History framework will be nothing but liberal propaganda, recently proposed a committee that would make sure school curricula only taught Goodthink:

The curriculum controversy stems from a board member's proposal to form a review panel to promote patriotic material, respect for authority, and the free-market system. In turn, the panel would avoid material about "civil disorder, social strife or disregard of the law."

And so of course, students acted like a bunch of spoiled brats who don't respect authority and ditched classes to protest at school district offices. The flagrant disregard for the rule of law started Monday at Evergreen High in Golden, and spread Tuesday to two other Jefferson County schools; in all, approximately 1200 students from the three schools engaged in open defiance of the legally constituted authorities who just want them to learn what a wonderful place America has always been. The mangy student radicals were no doubt egged on by their far-left liberal radical teachers, who staged a sick-out last week in protest of the proposed curriculum changes and teacher evaluation system. That bit of lawlessness forced the closing of two schools.

Students carried American flags and signs with dumb slogans about quality education and critical thinking, clearly disrespecting the memories of brave soldiers who died for the rights of students to sit politely in neat orderly rows and learn what they're told to.

The proposal, introduced by conservative board member Julie Williams, was put on hold last week; she told a Colorado education website that she recognizes there are some negative parts of American history, but jeeze Louise, do teachers have to harp on them so much?

“There are things we may not be proud of as Americans,” she said. “But we shouldn’t be encouraging our kids to think that America is a bad place. When [the course questions] our American values and leaves out so many of our founding fathers, that’s concerning to me.”

Williams added that she didn't know for sure that teachers were teaching that America is a bad place, but that the proposed Teach Happy America Committee was simply a means of guaranteeing it:

“All I can say is that this has been brought to me by so many of my stakeholders,” she said. “There are certainly enough questions about this. All I’m asking is for a committee to review it. What does it hurt to look at it?”

Seriously, if teachers aren't doing anything wrong, what are they afraid of?

Still, the local CBS affiliate found students who had already fallen to the Blame-America-First propaganda of their far-left liberal teachers. Just listen to these victims of leftist indoctrination:

“I don’t think my education should be censored. We should be able to know what happened in our past,” said Tori Leu, a 17-year-old student who protested at Ralston Valley High School in Arvada.

A student demonstrator, Tyrone G. Parks, a senior at Arvada High School, said Tuesday that the nation’s foundation was built on civil protest, “and everything that we’ve done is what allowed us to be at this point today. And if you take that from us, you take away everything that America was built off of.”