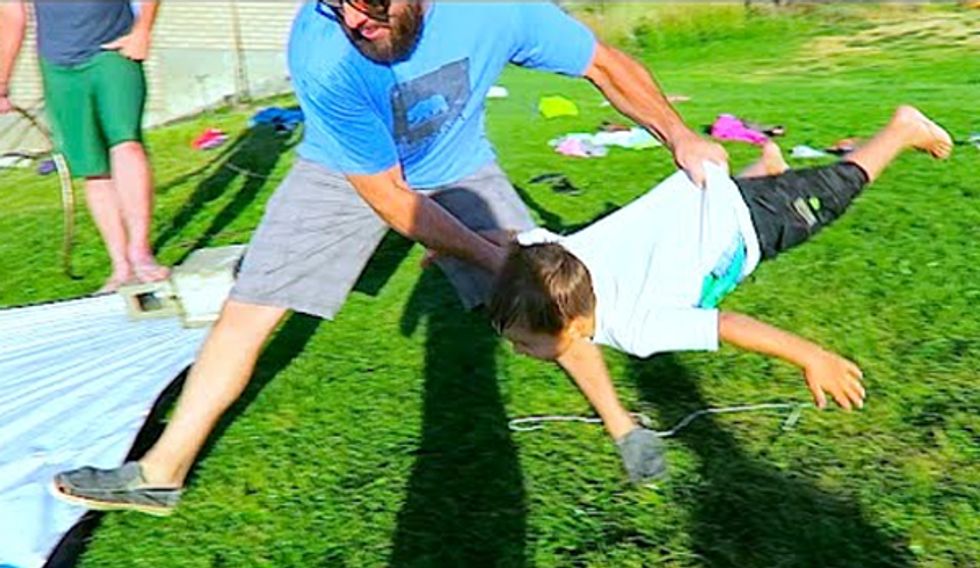 As you may recall, back at the end of September, Congress was so busy trying to kill healthcare for millions that it plum forgot to reauthorize funding for CHIP, the Children's Health Insurance Program -- for the first time in the program's history. No big, we were told, because the states had enough funding to keep the program running for a few months, and everybody loves CHIP with big bipartisan hearts, so Congress would get to it in plenty of time, no sweat.

The cruellest thing you can do is point out to Republicans the real effects of their tax policies.

Except that didn't happen, and then it was far more important to pass a tax cut for the rich, although Senate Finance Committee chair Orrin Hatch insisted it was no such thing, because he was born a poor black child. In the middle of Hatch's meltdown, Senator Sherrod Brown suggested that if Hatch really wanted to be a bipartisan guy, maybe instead of handing money to rich people, the Senate could reauthorize CHIP. But Hatch was in no mood to reauthorize children's healthcare in such a heated environment, even though Hatch himself had cosponsored CHIP in the '90s with Ted Kennedy, and had introduced a CHIP reauthorization earlier this year, cosponsored with Oregon Democrat Ron Wyden.

So here we are, facing December, the month a number of states had said back in September that their own funding for CHIP would run out. And now Colorado has become the first state in the country to send letters out warning parents that if Congress doesn't reauthorize the program soon, they should start looking for other options for their kids' healthcare. The Colorado Department of Health Care Policy and Financing announced Monday that the letters would start going out immediately, reassuring parents that the state has enough money to fund its CHIP program, CHP+, through the end of January 2018 and that they don't need to make any changes just yet, but if Congress doesn't reauthorize CHIP, then they should "be prepared in the event the federal government fails to reinstate funding."

“It is critically important for families to start planning for potential changes in their health coverage if the federal government doesn’t renew funding for the CHP+ program,” said Gretchen Hammer, Medicaid Director. “We remain cautiously optimistic Congress will renew federal funding, but we want our families enrolled in CHP+ to be aware that changes may be coming and not be caught off guard should the program come to an end. We encourage families to sign up for electronic notices and informational updates [...] so we can quickly reach them with updates.”

Want To Make Trump So Sad? Sign Up For Obamacare Starting Tomorrow!

With the first ACA enrollment under Trump starting tomorrow, things look bad, but not horrible. Mostly.

The state is also gearing up to shift families that qualify for subsidized health insurance under the Affordable Care Act to that option, though not every family with a kid on CHIP will necessarily qualify. If CHIP runs out of money, Colorado's state-run exchange, Connect for Health Colorado, would allow a "special enrollment period" to let people get their kids covered past the state exchange's deadline of January 12. (Hey! Remember, open enrollment on the federal exchange ends December 15, because Donald Trump Hates You.)

The House passed a truly crappy CHIP reauthoriztion earlier in November, but it pays for CHIP by raiding other healthcare spending, like preventive care, and that will never fly with Senate Democrats, so chances are that CHIP reauthorization will be swept into a year-end funding bill, assuming there's no government shutdown. Are you sick of all the winning yet?

Colorado isn't the only state running out of money for CHIP; nearly a dozen others will be sending out similar letters if Congress doesn't act. Minnesota has actually exhausted its own CHIP funding, but is spending an extra $35 million in state discretionary funds to keep the program going for now.

If Congress spends too much time deciding how best to fuck over the poor while helping the rich to more money, cuts to CHIP services in Colorado would start in February, affecting more than 75,000 kids and about 800 pregnant women currently receiving healthcare. Colorado's CHIP program is available to kids whose parents make up to $5,330 a month, for a family of four. Nationwide, CHIP covers nearly 9 million kids.

Seems to us those folks really need to hire better lobbyists. It's almost as if the people running Congress are far more interested in listening to big bankers and hedge-fund managers.

Yr Wonkette is supported by reader donations. Please click here to help keep us funded (we're just about out of credit card!), and for godssakes call your Senators about CHIP!