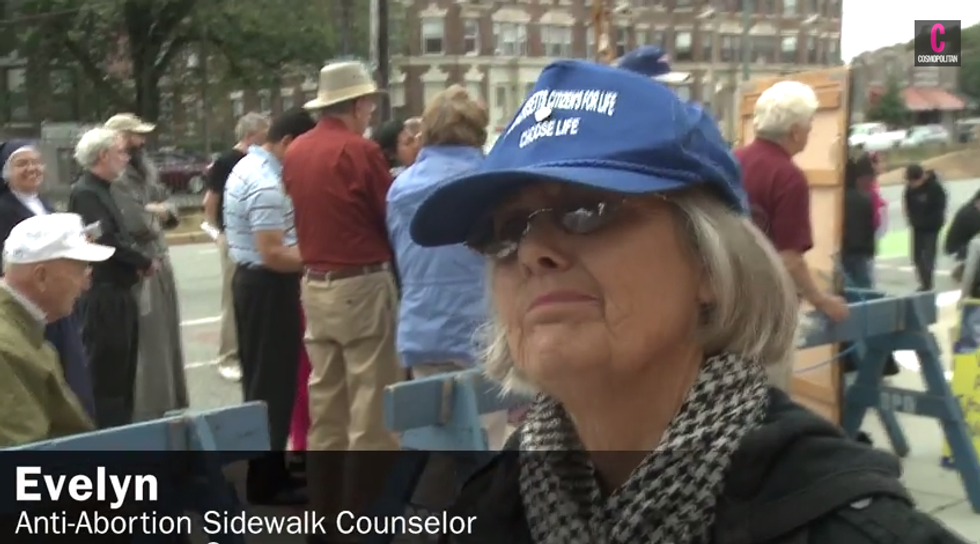 Everyone knows about those lone-wolf anti-choicers who maybe go a little bit too far with their cause when they, say, bomb an abortion clinic or shoot a doctor dead in his own church. But those are the exceptions. Most anti-choice activists are harmless and sweet, and they really do just care sooooo much about LifeTM and even women! They mean no harm when they assemble in front of a clinic and offer their wholly unqualified, untrained "counseling" to the women who risk eternal damnation by going inside to see their doctor.

That's why the Supreme Court ruled, in McCullen v. Coakley, that of course these unlicensed "counselors" have a First Amendment right to chase you down the street and call you a baby-killing whore. But, like, nicely. Politely. With a smile and maybe a plate of homemade cookies. And who could possibly object to that sort of unsolicited advice? Who wouldn't want these sweet well-intended "counselors" to get up all up in your face and tell you what an evil person you are for getting a pap smear? It's right there in the Constitution, silly, that any of your fellow citizens have a god-given right to get as close to you as they want to tell you what they think about you. (Note: Does not apply to members of the Supreme Court, duh.)

Hell-bound baby-hater Jill Filipovic went to a Boston Planned Parenthood to talk to these compassionate counselors who care oh-so-much about the ladies and just want to help them. You'll be shocked and amazed by the video she made because it turns out these not-protesters really are just trying to be helpful!

There's Evelyn, who's certainly rocking that sweet grandma look that so persuaded the Supreme Court. You can really feel her passion for women when she scoffs, "Gender equality? Equality to take the life of a baby? That’s equality?"

Minutes later, we see her following women entering the clinic and calling after them -- but not in a shouty way, of course, because she's nice and sweet and just trying to help -- "Abortion takes the life of an unborn baby. Ask to see the ultrasound!" Sure, you might think being followed into your doctor's office by a woman telling you that you're about to commit murder might sound intimidating. But that's just, like, your opinion, man, because she insists she and her fellow "counselors" are "just here to help the girls, to counsel the girls ... They could see it as intimidation, but, you know, everybody perceives things different."

Yup, excellent point, Evelyn. Like how some people might perceive you chasing them down the street with your pamphlets to be a total invasion of privacy, not to mention super annoying, and they might be inclined to tell you to maybe go fuck yourself with your knitting needles. Which would merely be their way of reciprocating unsolicited advice.

You know you can take Evelyn's "help" to the bank, because she definitely knows what's she's talking about. In addition to being an ultrasound expert, she also knows allllll about the harms of birth control.

Dumb baby-killing broads don't even realize that because Evelyn does not believe in birth control (trust us, Evelyn, it really does exist), it is very harmful and these girls need her to tell them that.

There's also Ruth, another woman we don't mind placing in the "probably has some lint-covered Werther's in her handbag" demographic. She also insists that she's not a protester; she's just there to offer some kind and solid advice for the ladies for whom she cares so much.

"If women want careers and education and everything, and they don’t want children, then what are they doing have sex?"

That's a pretty tough question to answer. Maybe they are having sex because they want to have sex? Believe it or not, some ladies enjoy careers and education and sex. All at once even!

But Ruth has an answer for that too.

Thanks, Ruth, very helpful indeed. Don't fuck anyone named Tom, Dick, or Harry -- and then you can have all the sex you want! Or maybe we are perceiving that incorrectly.

There are, of course, some very concerned menfolk there as well. The kinds with the crosses and the Bibles and the prayers, doling out scientific facts like "men and women are made different, in that women, as the church teaches, reach their full potential in motherhood." Sure, that might not actually be medical science, which presumably is why these women are going to these clinics in the first place. But the First Amendment now also protects your right to sincerely believe whatever "science" you want to believe, so protecting their right to "counsel" women is basically like the Fairness Doctrine, but for medical advice.

If this were really the full extent of the anti-choice movement -- some elderly folks standing around saying some dumb stuff -- it would still be a question as to why they should have the right to do that. But given the thousands and thousands and thousands of examples of these supposedly harmless activists engaging in intimidation, harassment, terrorism, and murder (which is supposed to be wrong, according to them, AEHM), it's a little difficult to gin up any sympathy for their rights to, like, do that. Even if they say they're just trying to help.