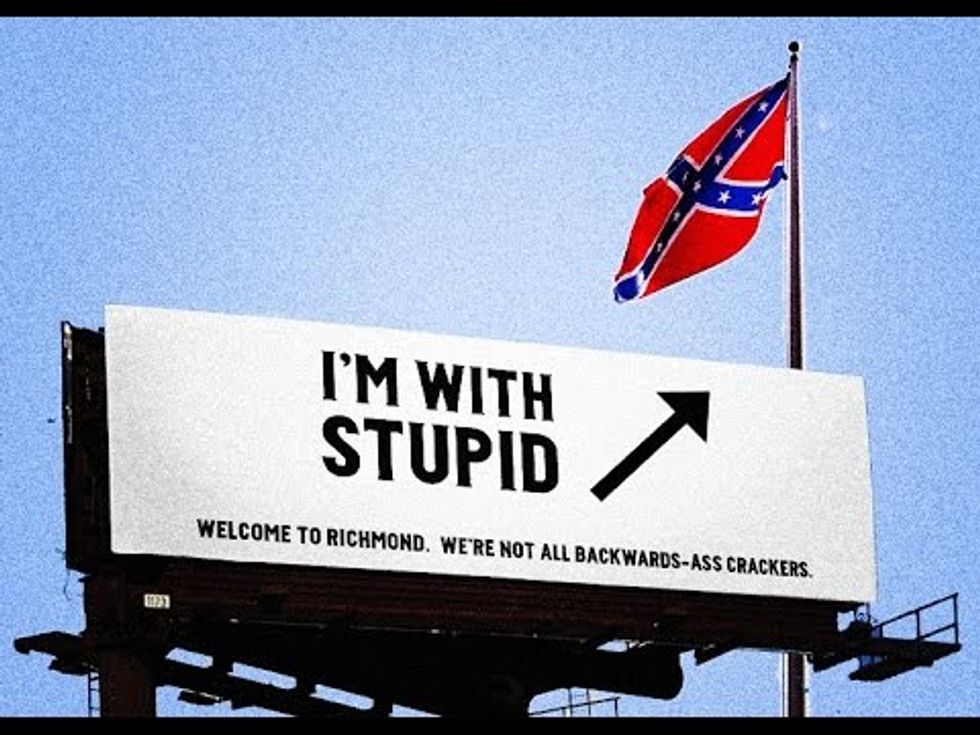 We can only imagine, as a verified Southern, what it must feel like to be a really shitty, confederate flag-loving moron who can't even manage to finish rubbing his privates against the trailer park's communal sex goat before he hears yet another story about how the country's been taken over by the blacks, the Mexicans, the gays, or The Union. (LOL, remember? Because these self-styled "patriots" are actually traitor pussies who are too weak to accept that the South LOST THE FUCKING WAR.)

You might remember over the summer, in the wake of the horrific murders that claimed the lives of nine black churchgoers in Charleston, South Carolina, the dumb fucking confederate flag finally started coming down and getting stomped on like the trash it is. And you also might remember that the confederate flag-humpers just whined and whined and whined, and in one case in Douglasville, Georgia, decided it would be a good idea to terrorize a black family in the middle of a birthday party, pulling guns and making threats on their lives -- even those of the kids. The cops came, there was many yelling, much loudness, and then it was over, right? Because racism is over, and this was probably just an isolated incident, right? RIGHT?

A Georgia state prosecutor today announced the indictments of 15 people who threatened African Americans and used racial slurs when they stopped at a family party while cruising around in a convoy of pickup trucks flying Confederate flags.

Ten men and five women were charged with issuing terroristic threats and participating in gang activity. Two of the men were also charged with battery for hitting a man at a gas station on the same day.

To refresh your whiskey-soaked memory, what had happened was:

Witnesses told the SPLC that men got out of their trucks, brandished weapons and yelled racial slurs and threats. According to the witnesses, a few people yelled “fuck y’all niggers” and “shoot ‘em.” When someone from the party said, “There are kids here,” a person from the convoy yelled, “We’ll shoot those bastards, too.”

Yeah, they sound nice. The investigation was launched by the Southern Poverty Law Center, which worked with law enforcement to secure said indictments. And kudos to local D.A. Brian K. Fortner for following through.

Morris Dees of the SPLC explains why it was so important to them to prosecute these limp-dicked pansies:

The SPLC reports that the folks who terrorized the birthday party were actually part of a "loosely organized group called 'Respect The Flag,'" and not, as we imagined, just a bunch of racist hicks who met each other in a closed Facebook group called "The South Will Rise Again, And Also My Sister Ain't Put Out One Time Since She Got A Tinder Account!"

We hope they all get to spend a nice long time in jail thinking about what they've done, or sexually pining for the trailer park goat. Honestly, we don't care how they spend their time in jail, because they suck.