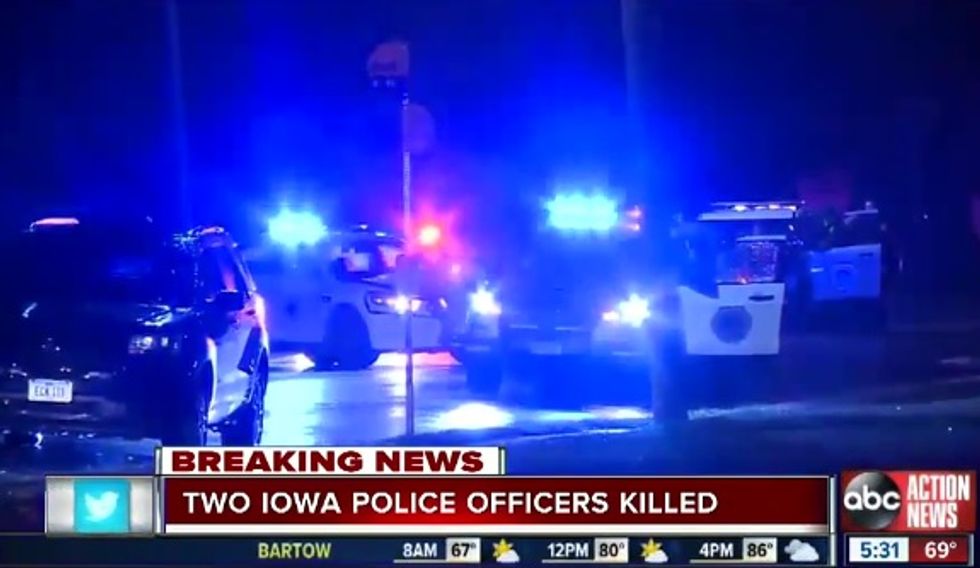 Iowa police have arrested Scott Michael Green, 46, in the ambush-style shootings of two Des Moines area police officers as they sat in their patrol cars last night: Scott Michael Greene, 46. One of the officers was shot in Urbandale, where Greene lives, the other about two miles away in Des Moines. Police haven't yet said why they believe he's a suspect.

Before Greene was identified as a suspect, an early statement by a police spokesman, Sgt. Paul Parizek, seemed to place the blame on a particular unnamed community, if you get his drift:

Sergeant Parizek, asked about the dangers that face police officers, grew angry. “These guys were gunned down, sitting in their car doing nothing wrong,” he said. “There is a clear and present danger to police officers right now. There’s definitely danger out there right now.”

He alluded to the tensions in police-community relations throughout the country.

“We’re very well aware of the society that we’re living in right now and the time,” he said. “And that there are some not-so-positive views of law enforcement that a segment of our population holds.”

“If we don’t provide the service in the area that we do, with the personal-type service that we do, we’re nothing more than an occupying army,” he said.

It almost sounds as if he's talking about a particular community there, although his comments about the need for improved police-community relations are at least welcome.

While Greene's motives haven't yet been determined, it seems unlikely he's a big fan of the Black Lives Matter movement, which was of course immediately blamed on social media for fomenting anti-police sentiment:

Note: all but the last two were posted after police had identified Greene as a suspect

Greene himself was kicked out of a high school football game in Urbandale in October, after waving a Confederate flag in front of black fans; he later posted a video ranting about the police violating his rights by ejecting him from the game. The video is full of the usual help-help-I'm-being-oppressed pissiness one often sees in videos by sovereign citizens and open carry advocates:

In comments on the video, Greene wrote, "I was offended by the blacks sitting through our anthem. Thousands more whites fought and died for their freedom. However this is not about the Armed forces, they are cop haters.﻿"

Greene complained to police that he had been assaulted by "African-American people that were behind me" who took his little flags away, although police apparently recovered them. Police told him he'd been ejected for causing a disturbance, and that waving the Confederate flag was in violation of school policy. Poor oppressed Greene kept asking to be allowed back inside the stadium so he could point out the black people he said had assaulted him, but the cops wouldn't let him, since the school had said he wasn't welcome. Poor guy. He explained that he'd come to exercise his Constitutional right to protest the black people who didn't stand for the anthem. A police officer explained,

You came just to fly the flag and possibly cause a disruption tonight. You have to understand in the current social climate we’re in, when you fly a Confederate flag standing in front of several African American people, that’s going to cause a disturbance, whether you intended to or not.

"But I was assaulted!" Greene keeps insisting, clearly frustrated that the police won't escort him back inside so he can identify the people who he says hit him and took his "property."

Greene's YouTube channel doesn't have anything else particularly inflammatory on it, although he did post three videos complaining about the poor fit of the windows in his (?) apartment, showing an apparently unacceptable amount of airflow through the closed double-hung windows. He seems nice.

Great news for armed 'militias' -- and just in time for the rigged election!

Some Might Call It Suicide By Cop. Idiot Nevada Lawmaker Michele Fiore Calls It 'Liberty'

We suppose Sgt. Parizek's concerns about the "not-so-positive views of law enforcement that a segment of our population holds" could apply to a particular community -- the hyper-entitled white racist community that's willing to shoot some cops because black people won't stand for the National Anthem. They tend to be a dangerous bunch, even compared to foreign terrorists. Worse, they've recently been handed a court verdict that some of the more unhinged armed lovers of personal liberty might have misread as a message that law enforcement officers are indeed the enemy of freedom.

Leaders of the Angry White Community have yet to take any responsibility for any role their irresponsible rhetoric may have played in motivating Greene to murder two law enforcement officers.