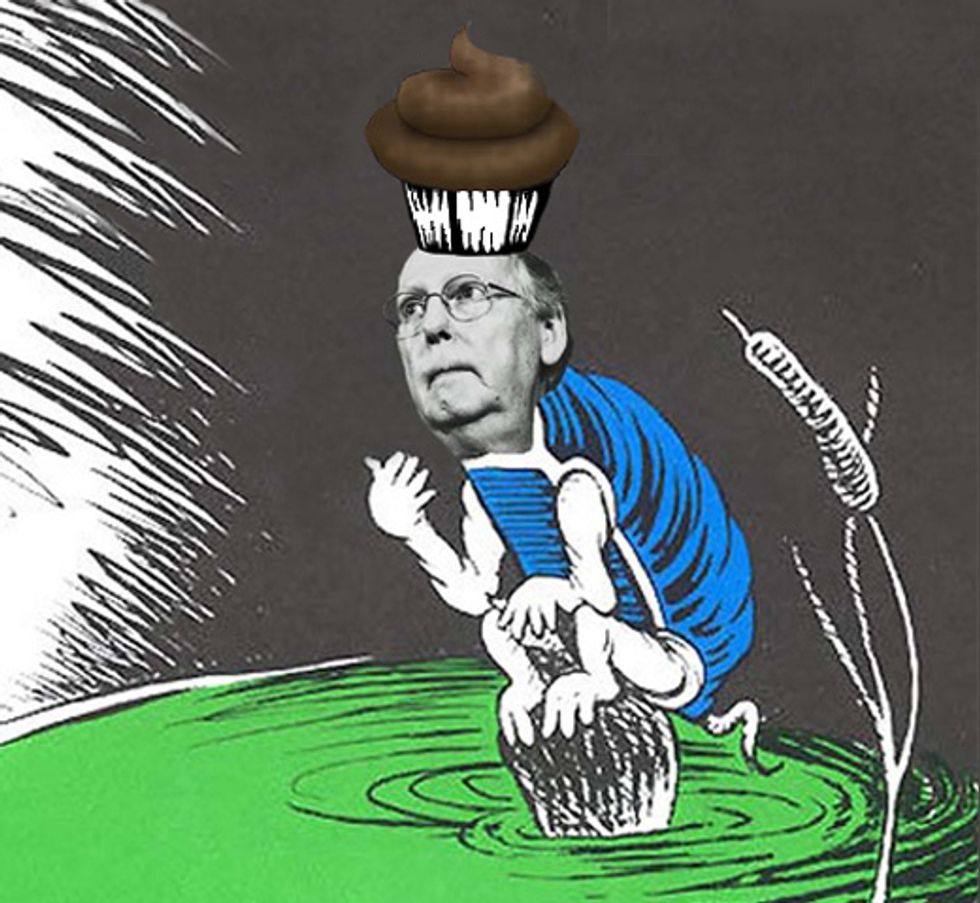 Yr Wonkette's coveted Legislative Shitmuffin of the Year Award usually just automatically goes to Ted Cruz, because he is, after all, Ted Cruz. But in 2016, Cruz and a bunch of the other usual suspects (Rand Paul, Marco Rubio, and some other people, it was so long ago) were either busy campaigning to save America from Donald Trump, or, after Trump won the R nomination, campaigning to get Trump elected, so they did even less legislating than usual. And of course Antonin Scalia went and died, giving Mitch McConnell the historic opportunity to be the very first Senate Majority Leader to lead his party in not doing its damned job for nearly a whole year, because that is the tradition he just made up while Scalia's body was still cooling. And what a historic dereliction of duty it was! Over and over again, we heard that it was the Senate's solemn duty to not even consider holding a hearing on Barack Obama's nominee to replace Scalia, because, after all, "the American people" needed the chance to weigh in on who should appoint the next Justice.

Mind you, Elizabeth Warren had an answer to that nonsense way back in February, immediately after the inaction commenced:

Senator McConnell is right that the American people should have a voice in the selection of the next Supreme Court justice. In fact, they did — when President Obama won the 2012 election by five million votes.

Article II Section 2 of the Constitution says the President of the United States nominates justices to the Supreme Court, with the advice and consent of the Senate. I can’t find a clause that says “…except when there’s a year left in the term of a Democratic President.”

Americans Want GOP To Do Its Damn Job, So That'll Never Happen

The polls consistently said a majority of Americans -- even a majority of Republicans, at least until election season got rolling -- wanted the Senate to do its job and hold hearings on the nomination of Merrick Garland. But Mitch McConnell? He sat motionless on a rock in the well of the Senate, occasionally blinking or slowly chewing a bit of lettuce, and did nothing. It's something he's really good at. And it's entirely likely that, with the Supreme Court seat still open in November, a lot of Republicans came home to the Party, held their noses, and voted for Trump, because while they may not have liked him, it would at least be someone with an "R" after their name making that appointment. So even though Yertle hasn't been an enthusiastic supporter of the Hair Thing, it's likely his Dr. No routine was enough to help swing the election. Whatever other idiocy Trump may inflict on the nation, after all, his Supreme Court choices have been handed to him already by conservative think tanks, since what Trump doesn't know about the judiciary could fill the empty void of the bankrupt Trump Taj Mahal.

Mitch McConnell Back-Pedaling On Russia Hack, But Slowly Because Of How He Has Turtle Legs

Mitch McConnell knows who is to blame for Russia hacking the Democrats. Would you guess ... BARACK OBAMA?

In addition to his inaction on the Supreme Court vacancy, McConnell earned his Shitmuffin this year for blocking bipartisan action on the Russian attempt to skew the 2016 election: When the CIA briefed congressional leadership and the House and Senate Intelligence committees in September, McConnell blocked a proposal to go public with the information, complaining that if a foreign government's attempt to influence the election in Donald Trump's favor were made public, he'd consider it an act of "partisan politics." Imagine that. Once the Washington Post broke the story of his involvement in hushing up the CIA's report, McConnell finally decided maybe Russian intelligence services breaking into American political parties' and campaigns' computers with the intent of influencing the vote might be a bad thing after all. The man's a profile in courage -- with a retractable neck.

Mitch McConnell has a thing to say about racism, and that is "vote Trump!"

More courage: When his party's candidate was flinging racist accusations of bias at the judge in the Trump University lawsuits, Yertle bravely ran -- or plodded -- away from actually calling it racist, in a cringe-inducing variation on the old "Who's on First" routine:

That's some party of Lincoln, isn't it? Congratulations on your Legislative Shitmuffin of 2016 Award, Sen. McConnell. We hope it's of some comfort to you when President Trump decides he doesn't think you love him enough, and decides to ... well, it's Donald Trump. We have no earthly idea what he'll do.