Congratulations, Texas! No Way Will This 101-Year-Old Lady Do Vote Fraud Now! 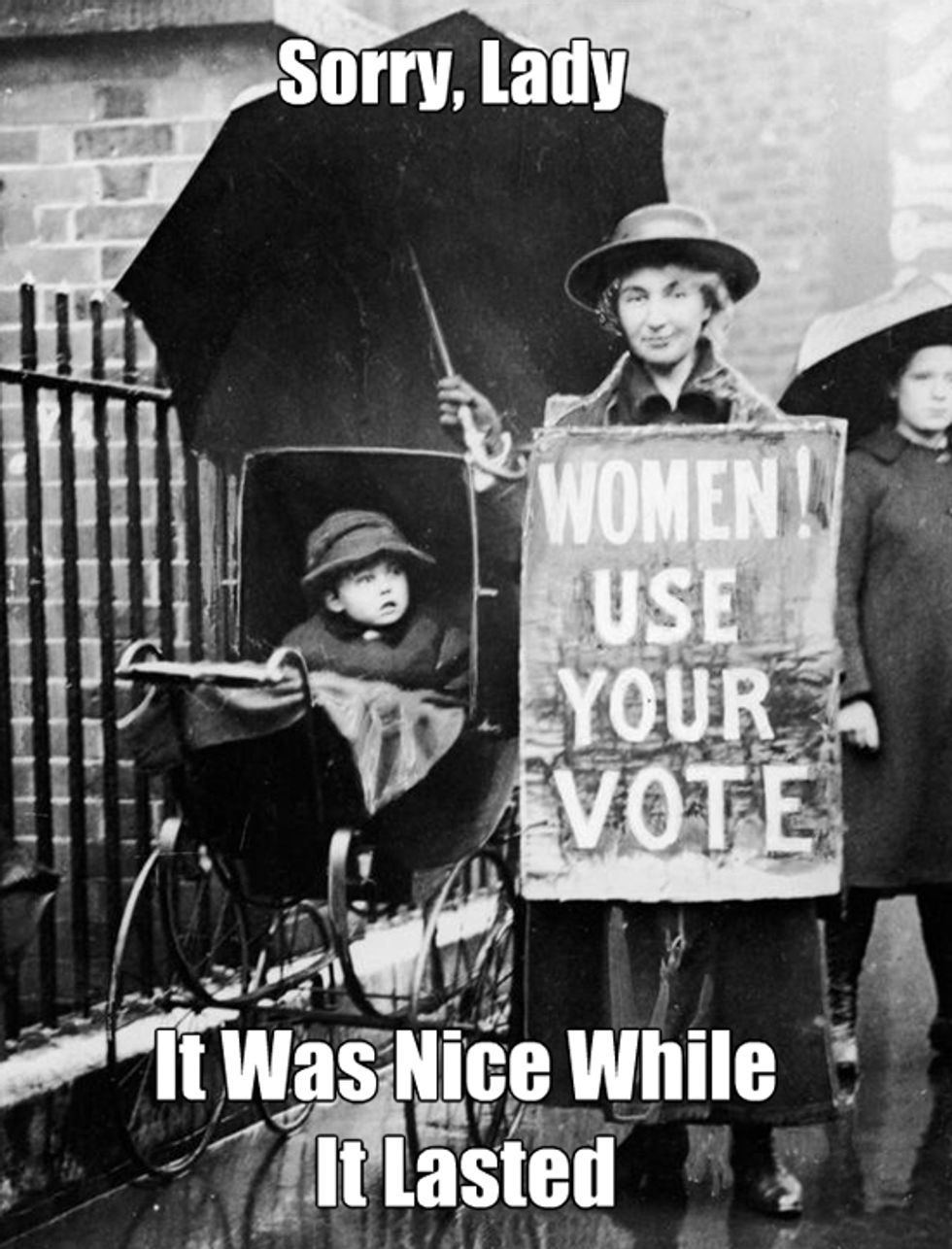 San Antonio, Texas, just elected its first African-American mayor, Interim Mayor Ivy Taylor. That's really exciting news, and while we don't know how 101-year old Mary Lou Miller planned to vote, she sure wishes her vote could have counted. But thanks to Texas's asinine voter ID law, Ms. Miller was excluded from casting a ballot, ending a voting career that goes back to 1934. We're pretty Mad About this Thing, and urge you to go read Miller's whole story so you can be mad, too.

Miller notes that the 19th Amendment was ratified when she was seven years old, and that as soon as she was 21, she voted in the 1934 elections, and has voted ever since. She also registered voters and drove people to the polls. But thanks to the nonexistent fear of voting fraud, there's not likely to be any more voting for Mary Lou Miller, because she can't get a photo ID. Way to go, Texas! You're really good at something!

She used to vote by mail because she lived in an assisted living facility -- no ID necessary. But between applying for her ballot and the election, she moved to a new facility, and the Post Office doesn't forward ballots. Gotta avoid fraud, after all. So Miller tried to get a photo ID, which was a problem for her; she stopped driving when she was in her early 80s, and never got a replacement ID. So when she went to the Texas Department of Public Safety to get a new ID, she was out of luck, because even though she'd been voting since Franklin Roosevelt was in office, she now finds herself not documented enough to get a Texas photo ID:

I did not have a Texas Driver’s License issued within two years of expiration. No Passport. No unexpired U.S. military photo ID. Nor did I have an “advance parole document with photo.” Sorry, but I never did time in the penitentiary, so I don’t have that document. Had I had just one of these documents, I could obtain my “Proof of Identity” and be somebody.

Oh, sure, she has a Social Security and a Medicaid card. But those aren't good enough in Texas. She needed her birth certificate, which was a bit of a problem:

I have never seen my birth certificate, if, indeed, one was issued. I was born in Luxor, a very tiny unincorporated coal village in Southwestern Pennsylvania, and maybe they recorded my birth, but I don’t have a copy. Nor was I born abroad, and I don’t possess a certified copy of a court order indicating a change of name.

She went ahead and submitted a provisional ballot at an early voting site, but knew  it wouldn't count, because it would only be good "if I, within 72 hours, present myself at the Elections Office with documents impossible for me to obtain." That's some catch, now isn't it?

Ms. Miller had nothing but nice things to say about everyone at the DPS and voting sites who tried to help her:

I must say that the clerks at both locations could not have been nicer, and they afforded me the most professional respect possible. They did not write the regulations, and they declared my situation was the strangest set of circumstances they had encountered. But my vote won’t count.

And at the end of her essay, does she rail against the obvious injustice of this idiotic law, or note that it's working exactly as designed, to limit participation in the electoral process? Nope. Don't think that would have occurred to her, because she is entirely too kind. Instead of calling the system the massive cynical theft of democracy that it is, she's content to make a moral case, urging people who can vote to "go to the polls and cast the vote I am being denied. Vote for those of us who cannot."

Oh, but the comments. They're the real gems. There's the guy who proudly proclaims that he doesn't vote because politicians are all crooks. There's the smartass who explains that "obtaining an ID is not difficult, but you do have to have an IQ just a little highter [sic] than a turnip." (This guy no doubt would also call for a return of literacy tests for voting.) There's the Rules Are Rules guy who patiently explains that voter ID laws apply to everyone, so there.

And then there are the two schmucks who inform the foolish old woman that this is all her fault. One suggests she's such an extreme outlier that she has to be a plant -- either by the Democrats or the liberal newspaper editors -- and also she should have known better than to expect her ballot to be forwarded, dummy. The other explains that she should have thought ahead and gotten a photo ID when she stopped driving 20 years ago, presumably because she should have known that she'd need it to vote in 2015. The only surprise is that nobody lectured her about how she should have had the good sense to be born somewhere that would have a backup copy of her birth certificate.

And so the Great GOP Voter Suppression Machine works -- everyone needs an ID to prevent the fraud that doesn't exist, and nobody really is inconvenienced, not at all. At least not anyone who matters. Only about 600,000 Texans who would otherwise be able to vote. In a sane system, voter registration would be automatic, but in Texas they don't do sane.

A couple weeks ago, The Rachel Maddow Showfeatured an excerpt from this video by the Campaign Legal Center, which has been working to help voters in Texas get proper ID. Even with well-prepared volunteers helping, voters hit roadblocks, just as the law intended. It's frustrating and infuriating, and you should watch it. Just keep any heavy objects out of throwing distance:

Here's hoping Texas's insane restrictions on voting are gone long before Mary Lou Miller is. She deserves to vote again. The election thieves who designed the voting restrictions? They deserve a polling place designed by M.C. Escher, staffed by escapees from a Kafka novel.