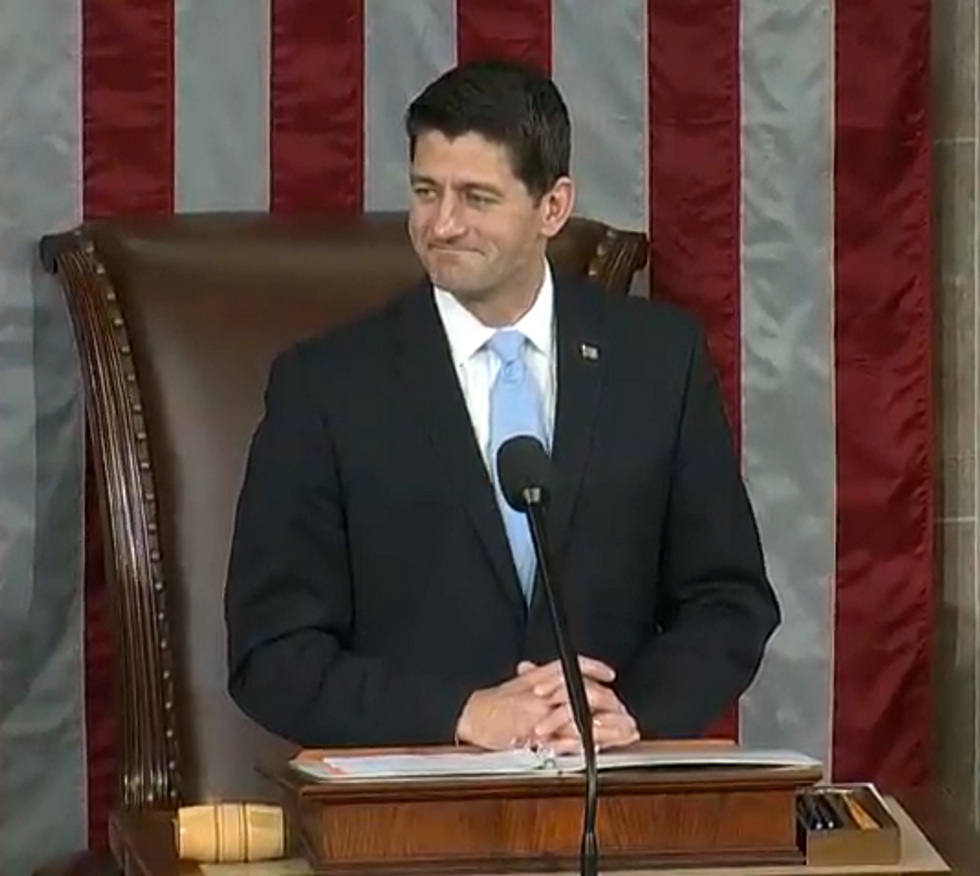 What a long strange stumble down the stairway to hell for Wisconsin Rep. Paul Ryan. Sorry, Paul "D, as in Dingleberry Double Douche Didn't Want The Job Anyway" Ryan. The boy wonder policy wonk who crafted a "budget" his beloved Catholic bishops said would make Jesus cry was called upon to rescue Mitt Romney's doomed presidential campaign in 2012. And boy did he not do that very well.

After House Republicans stopped crying (literally, CRYING!) about the complete chaos of their conference -- since John Boehner was quitting to spend more time drunk-tanning, and Kevin McCarthy quickly withdrew from the speaker's race to spend more time denying he was fucking his fellow family values Republican, Rep. Renee Ellmers -- the GOP settled on Paul Ryan and begged and pleaded for him to save their sorry asses and boss them around, until they decide to turn on him and chase him out of town too.

And after he doth protested too much that no, no, he simply couldn't, he flip-flopped like his old running mate Mitt and caved, on the condition that everyone, especially the House Freedom Caucus, suck on his tiny boy-vag.

Which of course they told him they were not going to do, which of course did not stop him from agreeing to take the gig anyway, thereby showing his party and America that he, like Boehner before him, will end up the unwitting whipping boy of the Freedom Caucus, who declared him a moderate RINO before he was elected speaker and will no doubt sing that screechy tune all day long, every day, because it's the only song they know.

Well. Ryan was elected speaker of the House on Thursday, so Boehner could make his tearful (of course) exit, and Ryan could enjoy five minutes of party unity, before the greedy devouring of his rotted soul, by the nihilists in his own party, begins.

Good luck with that, Paul Ryan. Sorry, Paul D. Ryan. You're going to need it.