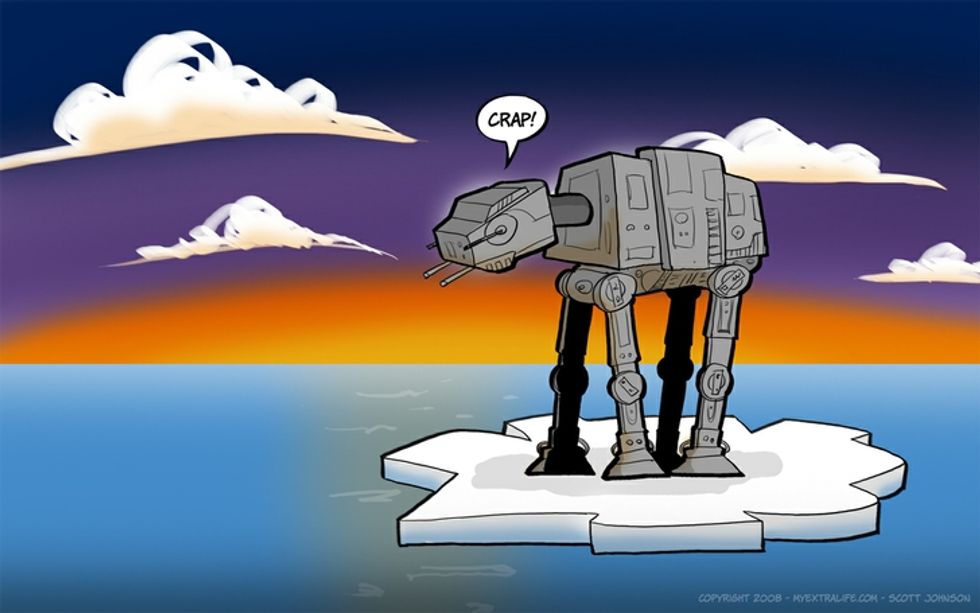 You sort of have to admire Indiana congresslackwit Larry Bucshon for being an out and out global warming denier, since so many of his more sophistimacated Republican colleagues have decided to avoid the question with the"I'm not a scientist" dodge. No such shilly-shallying from Rep. Bucshon, no sir! He takes his science denial old school, thank you very much, and he doesn't mind saying so.

Wednesday, during a hearing held by the House Science, Space, and Technology Committee -- which seems to be where all the haters of science end up -- Bucshon let White House Science Adviser John Holdren know that he's on to these phony scientists and their crazy claims about the Earth heating up with from greenhouse gasses, mostly CO2 from fossil fuels. Rejecting the need for the Obama administration's new Climate Action Plan, Bucshon explained that there just isn't any such thing as climate change anyhow:

Congratulations, Frank Luntz! Your advice to the G.W. Bush administration to talk about "climate change" because it sounds less scary than "global warming" has worked very well. The right now pretends that having two terms for related but slightly different problems is evidence of skullduggery by scientists. And of course he repeats the old "no warming for two decades" canard -- except that "two decades" nonsense is a favorite myth of climate deniers, who look at very selective statistics and ignore long-term trends, and the increase in ocean temperatures, as ThinkProgress points out:

[N]early all of the increased heat from carbon emissions is getting absorbed into the ocean, not into the atmosphere. So the ocean is rapidly heating, acidifying, and impacting the weather. What’s more, scientists believe global surface temperatures are set to rise rapidly in the face of those increasingly warm and acidic oceans.

Just because we love this video of Neil deGrasse Tyson and his doggie, let's remind Rep. Bucshon how climate and weather are different, and what long-term trends are:

Beyond the absolute fact that global warming isn't happening, Bucshon laid bare the real true facts about climate science: It's all just a plot by Scientists to keep getting money for issuing alarming reports. He started with a dishonest question about the impact of reducing CO2 emissions and went on from there:

Bucshon: Is it true that this rule has no effect on the global temperature change?

Holdren: Can I take that? I’d like to respond to that.

Bucshon: There’s public comment out there that that question has been asked and answered saying no.

Holdren: You should look at the scientific literature [interrupted] rather than the public comments …

Bucshon: Of all the climatologists whose careers depends on the climate changing to keep themselves publishing articles? Yes, I could read that, but I don’t believe it.

Well, then, if all the Breitbart and Daily Caller readers have sent emails saying that the regulations wouldn't reduce global warming, why would you listen to some biased scientists who get rich publishing articles? God knows they're nowhere near as reliable as the oil and gas industry's engineers and scientists, who are professionals who actually work with oil and gas and know that there is no connection between CO2 and the climate. And we simply can't afford to reduce greenhouse gasses, except of course that we can.

Meanwhile, the Stupidest Man on the Internet scoffed at the liberal media and its pawns in the scientific community yesterday, because he saw an article saying that global warming could result in colder winters. Ocean currents are just another liberal plot, it seems, as are the effects of warmer ocean temperatures melting the polar icecaps. But don't worry -- last winter was really cold.