Congress Wants Trump's 'Tapes,' If There Are Any 'Tapes' (Are There 'Tapes'?) 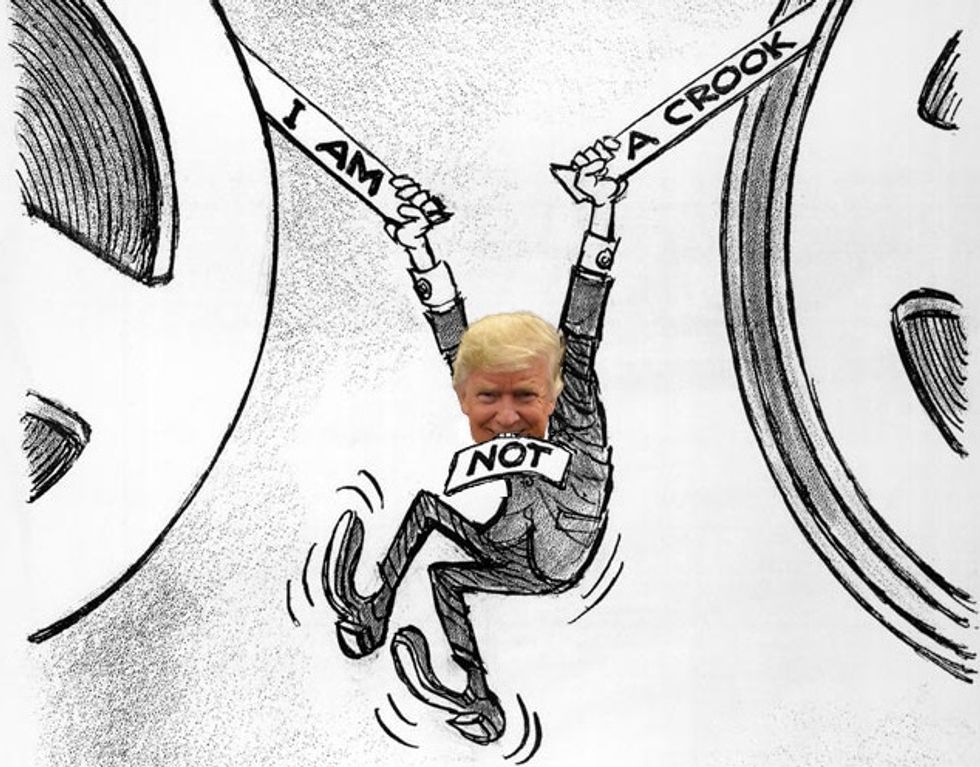 With apologies to Herblock

No big surprise here: Last week, Donald Trump Tweeted his teasing little threat to fired FBI Director James Comey, telling him to be careful what he says to the press because what if there are "tapes," huh? Then Sean Spicer and Trump himself both played cute about the possible existence of any recordings, refusing to say anything more, because uncertainty is so much fun and makes the bad guys sweat. And now Democrats and Republicans in Congress are making it very clear that if any recordings of Trump's discussions with Comey do exist, then Donny had better turn them over pronto, because there's no executive privilege for stuff you've openly talked about on the interwebs.

You see what happens, Donnie? This is what happens when you Tweet about fucking the FBI in the ass.

Democrats want a special prosecutor appointed immediately, and Lindsey Graham (do we need to say he's a Republican? Yes, he is, even if Trumpsters don't think he is) went on NBC's "Meet The Press" to say “If there are any tapes of this conversation, they need to be turned over,” which only confirmed many people's suspicions that Graham is secretly bipartisan.

In yet another symptom of the Trump administration's public turn to Chaotic Evil, almost no administration spokespeople were made available to the Sunday shows. Chris Wallace did some naming and shaming on “Fox News Sunday,” listing guests who wouldn't be appearing on the show because the White House wouldn't make them available to talk about Comey's firing. UN Ambassador Nikki Haley and Secretary of State Rex Tillerson did put in appearances to talk foreign policy, but the only Trumper to show up this weekend was Kellyanne Conway, and that was on Fox's "Media Buzz" show, not one of the big Sunday shows that sane people avoid in favor of sports or cartoons.

Is Donald Trump Recording People Like A Common Nixon?

He likes to watch.

Donald Trump spent the weekend at his Virginia golf course, which has all sorts of fabulous surveillance equipment, but no, you can't see the recordings of his rage-fueled golfball abuse either. Did he watch the shows? He always angerwatches the shows. It's how he gets his foreign policy briefings.

On ABC's "This Week," Mark Warner, the ranking Democrat on the Senate Intelligence Committee, said he would "absolutely" support a subpoena to get any recordings Trump might have, saying, "We have got to make sure that these tapes, if they exist, don’t mysteriously disappear." Ah, but that's the question, isn't it? Tapes? What tapes? Trump put "tapes" in quotes in his Tweet, so that could mean he was just joking! Why are you so literal-minded? Nobody uses tapes anymore, silly (which will be a reel-to-reel challenge for political cartoonists, frankly).

On CNN, Senate Minority Leader Chuck Schumer said plenty of Democratic senators are happy to block the confirmation of whoever Trump appoints to head the FBI until a special prosecutor is named:

“We will have to discuss it as a caucus, but I would support that move, because who the FBI director is is related to who the special prosecutor is,” Schumer said. noting that [Mark] Warner, whose committee is also conducting a Russia probe, also supports a special prosecutor.

Not that Senate Dems can really do much more than toss up some procedural delays; since Harry Reid ended the filibuster on nominations in 2013, that means whoever Trump chooses will only need a simple majority. But foot-dragging is still a nice gesture, no? Graham said he wasn't ready for a special prosecutor or independent commission, since the Trump/Russia investigation is "not a criminal investigation" -- at least not yet.

Schumer, taking advantage of the Trump media vacuum, said on another show that if any recordings do exist, Trump had better make with the transparency and turn them over right quick:

“To destroy them would be a violation of law. But he should turn them over to Congress and to the investigators,” Schumer told CNN’s “State of the Union.” “If there are no tapes, he should apologize to both Jim Comey and the American people for misleading them.”

Utah Republican Mike Lee agreed, in his professional opinion as a former federal prosecutor, that if there are recordings, "it's probably inevitable" they'd have to be turned over to Congress, and also said he'd expect subpoenas to be issued. On “Fox News Sunday,” Lee said if Trump had installed some kind of taping system in the White House, that was "not necessarily the best idea."

In other words, this weekend is just one more big pile of support for Yr Wonkette's proposed motto for the Trump Administration: "Well, That Probably Could Have Gone Better."

Yr Wonkette is supported by reader donations -- please hit the linky below to throw your Ameros at us!