Congressidiot Learns Some People Really Touchy About Hitler For Some Reason 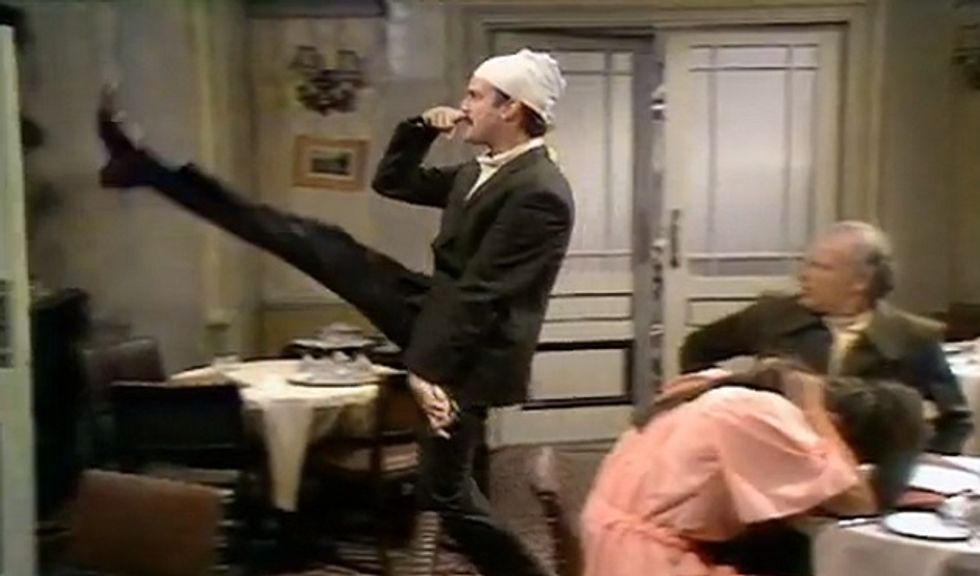 So, this morning we brought you this indignant cri de butthurt from Rep. Randy Weber, who was Very Concerned about Barack Obama's failure to join other world leaders for a march-that-wasn't-a-march in Paris:

And so, in a flashback to 2009, we got headlines like this one from USA Today: "Texas GOP Congressman Compares Obama to Hitler." We thought that was just part of the Terms of Service on GOP.org by now.

You might not be terribly astonished to learn that some people thought this was in poor taste, as it both suggested that not attending a group photo-op was akin to rolling across the Maginot line, and also downplayed the seriousness of Hitler, which is something best left to Mel Brooks and British comedy troupes. (On the other hand, Weber did at least note that Hitler's punctuality was a mixed blessing.)

Well! Rep. Weaver has had his eyes opened and has issued a heartfelt apology!

I need to first apologize to all those offended by my tweet. It was not my intention to trivialize the Holocaust nor to compare the President to Adolf Hitler. The mention of Hitler was meant to represent the face of evil that still exists in the world today. I now realize that the use of Hitler invokes pain and emotional trauma for those affected by the atrocities of the Holocaust and victims of anti-Semitism and hate.

No, he didn't intend to compare Obama to Hitler at all, except for the direct comparison of Hitler and Obama. But it's good to know that Weber now realizes the use of Hitler "invokes pain" and makes people think of the Holocaust, when Weber's only intention was to make people think of the Anschluss, is all.

Oh, also, he adds that he did kind of mean to compare Obama to Hitler insofar as he's letting radical Islam go blitzkrieging all over Europe:

The terrorist attacks in Paris should remind us of the evil that still exists. Hitler was the face of evil, perpetrating genocide against six million Jews and millions of other victims. Today, we are facing the evil of Islamic extremists who are attempting to instill fear and murdering the lives of innocent people from Paris to Nigeria to Jerusalem and all over the world. The President’s actions or lack thereof is my point of contention. Islamic extremists have shown they are not going away, and instead are hungry for more blood.

Sorry not sorry, I should have said that Obama reminded me of how Neville Longbottom appeased Hitler in Czechoslovakia and allowed Voldemort to annex the Sudetenland.