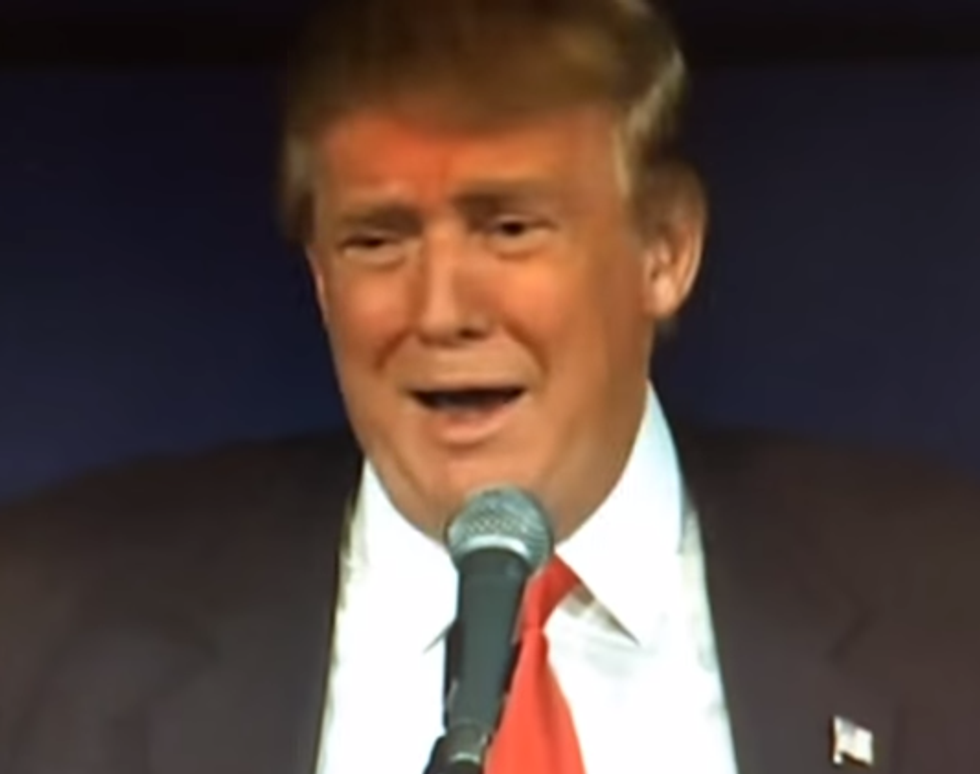 What're you gonna do, stop him?

Having won the crap out of the Nevada caucus on Tuesday night, and the primary in South Carolina on Saturday, Republicans who do Being Republicans for a living (a really nice six-figure living, by the way) are at long last sucking it up, bending over, grabbing their ankles, and trying to think of England:

In an interview on Wednesday, [Rep. Duncan D.] Hunter told POLITICO that Trump has the strength needed for the job. "We don't need a policy wonk as president. We need a leader as president," Hunter said, adding that he has told his colleagues much of the same thing. "I'm in, and I've been in," he said in a telephone interview.

Duncan D. Hunter -- the "D" stands for Daddy, the now-retired Rep. Duncan L. Hunter, who got him this sweet gig -- is the vaping, surfing, snowboarding, millennial dude from California who knows the most important quality in a president isn't whether the president, like, knows stuff. Knowing stuff is for nerds who don't even off-road, bro! Nah, what you want is a guy who isn't afraid to whip out his dick, swing it around in your face, threaten to bomb the shit out of whoever, waterboard them, kill their families -- and make them pay for it. Better still if he is SO COOL he won't even return your phone calls:

"I don't think Trump wants my endorsement," Hunter said, while also remarking that he has not heard from the candidate himself. "And that's one reason why I like him," he added.

"Thank you sir, may I have another," Hunter probably added after that, but POLITICO is too much of a lady to report it.

“Donald Trump has clearly demonstrated that he has both the guts and the fortitude to return our nation’s jobs stolen by China, take on our enemies like ISIS, Iran, North Korea and Russia, and most importantly, re-establish the opportunity for our children and grandchildren to attain the American Dream,” Collins said in a statement released first to The Buffalo News. “That is why I am proud to endorse him as the next president of the United States.”

Oooh, maybe Donald Trump will send him a free hat!

Hunter and Collins are the first two members of Congress to publicly endorse Making America Great Again, but they won't be the last. For all their "oh he is so crass" and "that's not who we are as a party" protestations, Republicans are going to be falling in line right quick behind their nominee. You know, Id Boy, the guy whose unfiltered, unapologetic racism and xenophobia is the driving force of the Grand Old Party:

Sure, some delicate flowers like Sen. Lindsey Graham have said they'd rather see Hillary Clinton in the White House, but that won't last. Donald Trump is the new face of the Republican Party, he's going to be their nominee, and there ain't a goddamned thing they can do about it.