Congressmuffin Aaron Schock: I, Like Abe Lincoln, Am No Longer In Congress

The House Of Representatives is going into recess for two weeks, which means that ethically challenged CongressCheeks Aaron Schock had to do to his "So Long, Farewell" speech a few days early. Schock had previously promised to resign effective March 31, since the feds have started Just Asking about the various private planes, Katy Perry shows, and romance trips to India that Schock seems to have been spending taxpayer money on. Speaking to the House floor on Thursday, Schock said the usual blah blah about how he was grateful for the opportunity to serve the people in Peoria, God has a plan, etc. He stated that The Good Book (didn't specify which, probably one of Martha Stewart's guides to Good Things) says that "before I formed you in the womb, I knew you." He did not add, "and you looked FABULOUS!"

But then it gets good all of a sudden! Know who ELSE left an Illinois Congress seat far too early? Abraham Lincoln, that's who! Now Mediaite points out that Lincoln actually promised to serve only one term, whereas Schock is resigning for being grifty in a possibly law-breaking way, but no matter. Schock and Lincoln both faced many trials, but they persevered because they never gave up. Lincoln was, in point of fact, the first documented American to take Taylor Swift's advice and "shake it off." Aaron Schock knows all about shaking it off, as he had to do when haters were hate hate hating on his Downton Abbey office. And that is not where the similarities between the two end! Now people can make fun, but a perusal of American history (no, not libnazi A.P. U.S. History, REAL American history) will show that Schock and Lincoln are basically brothers from another mother, and also another century. (Their common father, America, was born in 1776.)

1. SOME SAY that Aaron Schock is into sleeping with dudes. SOME HAVE ALSO SAID that about Abraham Lincoln! Who could even know if it's true?

2. They both used Instagram a lot! Lincoln actually used a lot of apps on his Obamaphones. David Barton history tells us that the original Emancipation Proclamation was simply a group Snapchat that said "LOL no more slave stuff you guyz." Liberals added all those flowery nice-time words later.

Don't believe me? Believe THIS picture that Abraham Lincoln Instagrammed on vacation: 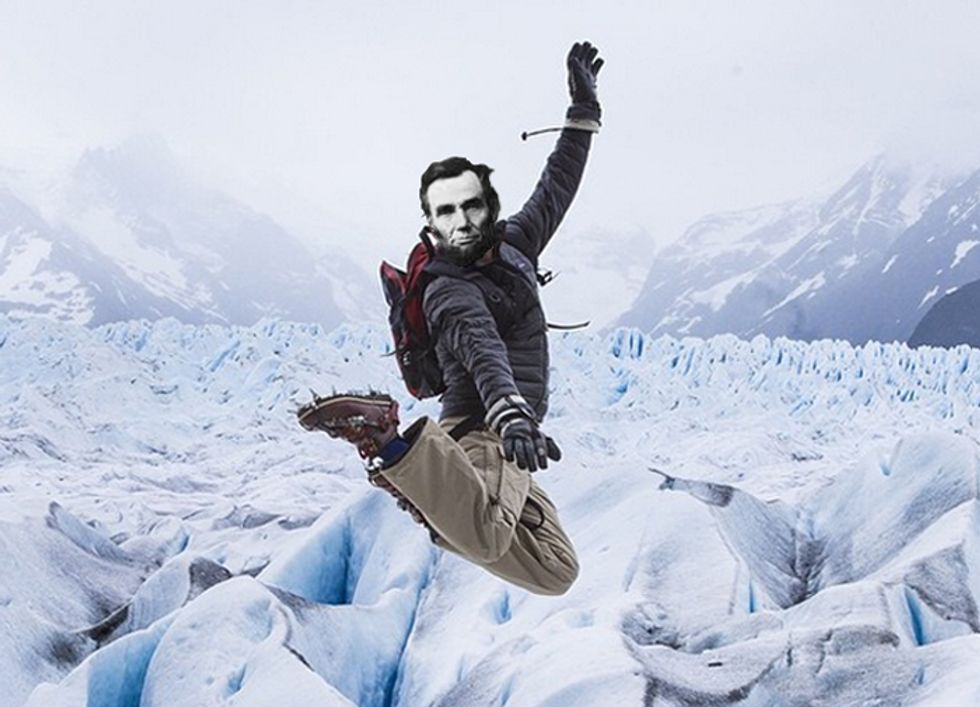 Yep. What fun Lincoln was having, on one of his many vacations! He was tired after the Civil War, you can't blame him for doing a bit of traveling after he saved the union.

3. Schock and Lincoln both talked to the animals: 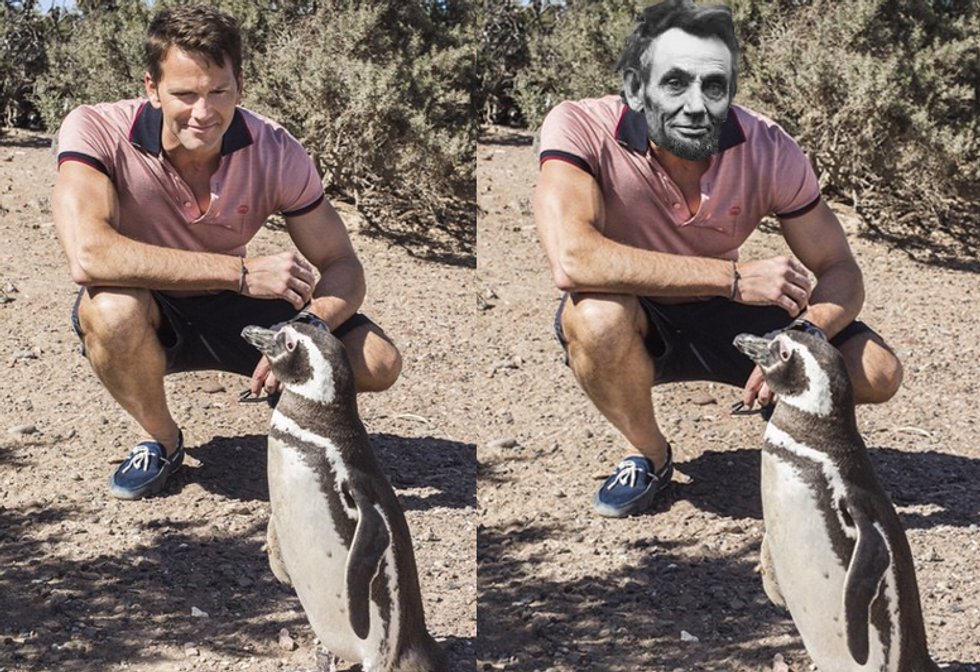 4. They both did the ALS ice bucket challenge in a way that shows off each and every wet luscious muscle on their hot Congressional Bodies!

5. They are both most at home when they are CATCHIN' SICK WAVES, BRAH. 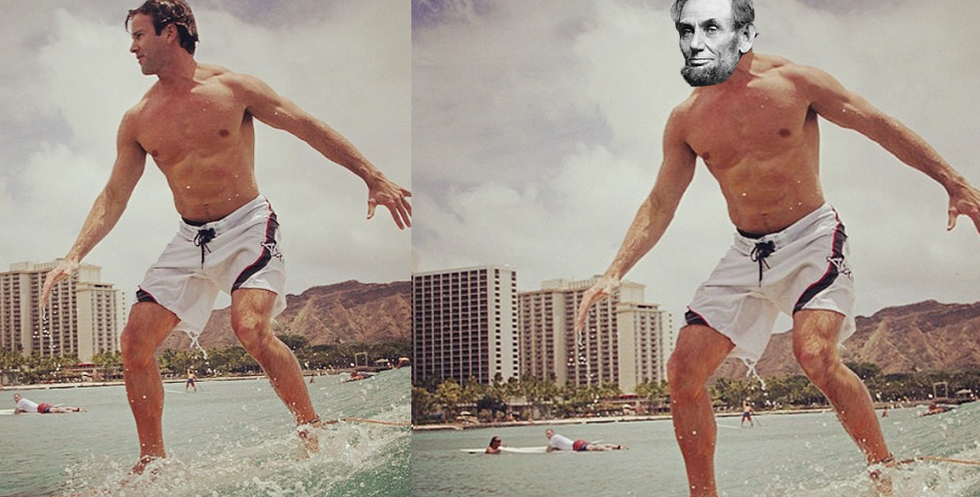 Man, these two guys, it's like, we can't even tell them apart!

6. Also, HISTORY FACT, Aaron Schock isn't the only famous Republican to have a hot male personal photographer. Lincoln did it first! 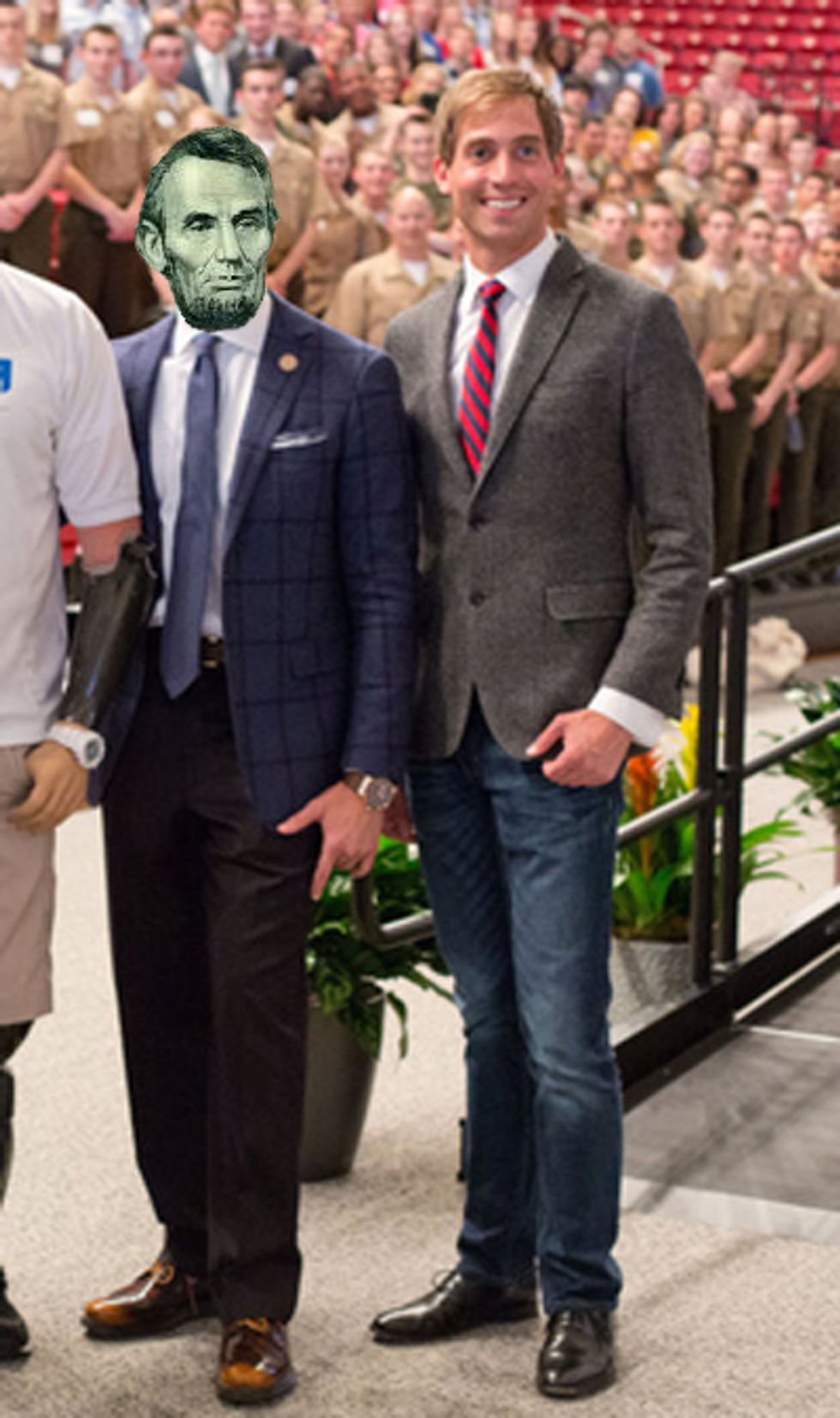 Oh damn, we are so sorry, Aaron, we did NOT know Abraham Lincoln used Jonathon with an 'O' for his personal "photography" needs! It's terrible for you to find out this way, how will you ever live up to your hero? Every time he "photographs" you, you're going to be wondering if he's thinking about America's 16th president. Sorry.

After thorough examination, we have to agree. Aaron Schock and Abraham Lincoln ARE just the same. They love vacations, penguins, Instagram, gettin' wet, and maybe even "personal photographers," or whatever old-timey job Lincoln's rumored lover Joshua Speed had. So we guess Schock will rise from the ashes and become president one day very soon! Maybe he can go down in history as the one who freed all the conservative Christians from Obama's FEMA camps, which totally exist.