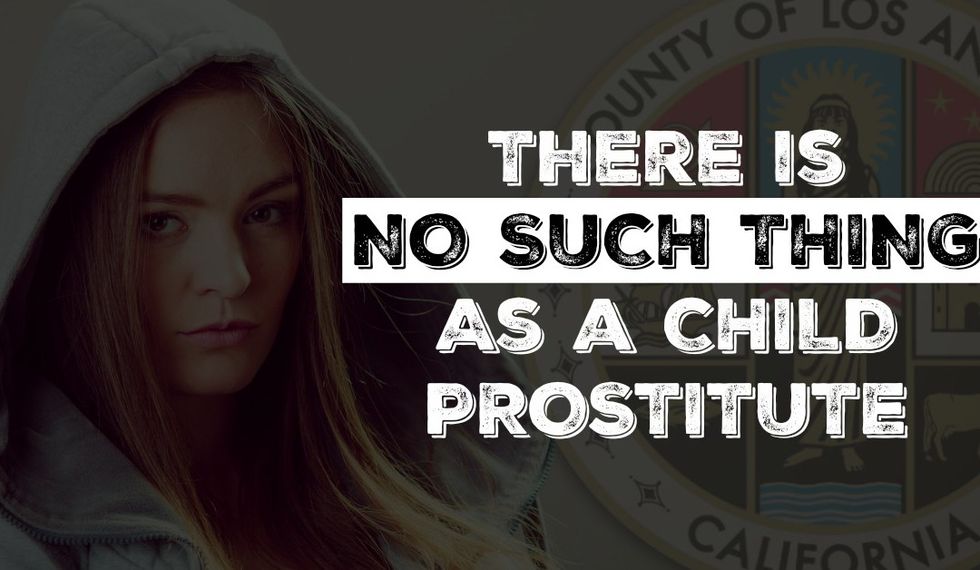 An op-ed written by California state Assembly member Travis Allen in the Washington Examiner is getting a lot of traction in the Wingnut-O-Sphere today, perhaps because the headline of said op-ed is "California Legalizes Child Prostitution."

WOAH IF TRUE! Man, that sure sounds terrible! Why does California want all the children to have sex for money? That is for sure a terrible thing, it is very surprising that someone would want that! One would just think that child sex-trafficking would be something that we could all agree to be universally against!

Beginning on Jan. 1, prostitution by minors will be legal in California. Yes, you read that right.

SB 1322 bars law enforcement from arresting sex workers who are under the age of 18 for soliciting or engaging in prostitution, or loitering with the intent to do so. So teenage girls (and boys) in California will soon be free to have sex in exchange for money without fear of arrest or prosecution.

Naturally, Allen's assessment of the bill was echoed at World Net Daily, and at the completely insane White Nationalist MRA/Pick-Up Artist blog Vox Populi, which cites this as a reason why California is evil and should just be its own country.

Twitter idiots also jumped on the bandwagon, including your favorite and ours, Joe Walsh.

Not to mention the others who were all like "HA, NOW WE KNOW #PIZZAGATE IS REAL!"

The bill, signed into law by Governor Jerry Brown earlier this month, is not actually about legalizing child prostitution. It is about punishing the right people, and getting trafficked minors help, rather than throwing them in jail. Which is actually a very good idea! I think we can all agree that the victims of a crime should not be the ones punished for it!

Allen claims that the law will be a boon for those who pimp children for sex, because if those minors are not being arrested for solicitation, they will be able to spend more time on the streets bringing in the cash money.

The unintended but predictable consequence of how the real villains — pimps and other traffickers in human misery — will respond to this new law isn't difficult to foresee. Pimping and pandering will still be against the law whether it involves running adult women or young girls. But legalizing child prostitution will only incentivize the increased exploitation of underage girls. Immunity from arrest means law enforcement can't interfere with minors engaging in prostitution — which translates into bigger and better cash flow for the pimps. Simply put, more time on the street and less time in jail means more money for pimps, and more victims for them to exploit.

Wow! So, we have to punish child victims in order to make things tougher for those who victimize them? No! We do not, actually, because the law still allows for sex-trafficked minors to be taken into custody or be declared a dependent child of the court. Meaning that these children can still be taken off the street, but they can't be punished and thrown in jail themselves.

Additionally, this measure actually helps fight child sex-trafficking, and takes away the leverage pimps and sex-traffickers have to keep these minors in line -- the "If I go to jail, so will you" leverage -- and may result in trafficked minors seeking help from the police rather than avoiding them for fear of going to jail. Ta-Da!

This legislation is the result of a combined effort from the McCain Institute and the Human Rights Project For Girls, the "There's No Such Thing As A Child Prostitute" campaign, designed to put the blame where it belongs in cases of child sex-trafficking, treating the pimps as criminals and the minors as the victims of sexual abuse that they are.

Regarding the reason for the campaign, the McCain Institute stated:

“There is a very real way in which the term “child prostitute” diminishes the violence, harm, trauma and coercion that a trafficked child is subject to. The term child prostitute is therefore a misnomer, failing to capture the legal and moral context of what these children endure on a daily basis. Most of these underage children are forced to sell themselves to many different men every night. The traffickers exert full control over the children through both manipulation and coercion. These children have no choice or agency here.”

Pilot programs in Compton and Long Beach boasted great success and, rather than boosting the income of high-profile exploiters, resulted in their arrests. A similar measure in Los Angeles passed with bipartisan support.

It's actually a really great program, and includes a new Law Enforcement First Responder Protocol for dealing with child victims of sex-trafficking that will hopefully become the national model. It encourages providing victims with community-based services and actually helping them, rather than treating them like criminals.

But hey! It's a lot more fun to suggest that California, evil blue state that it is, is just straight up legalizing child prostitution because it LOVES the idea of child sex-trafficking, isn't it?