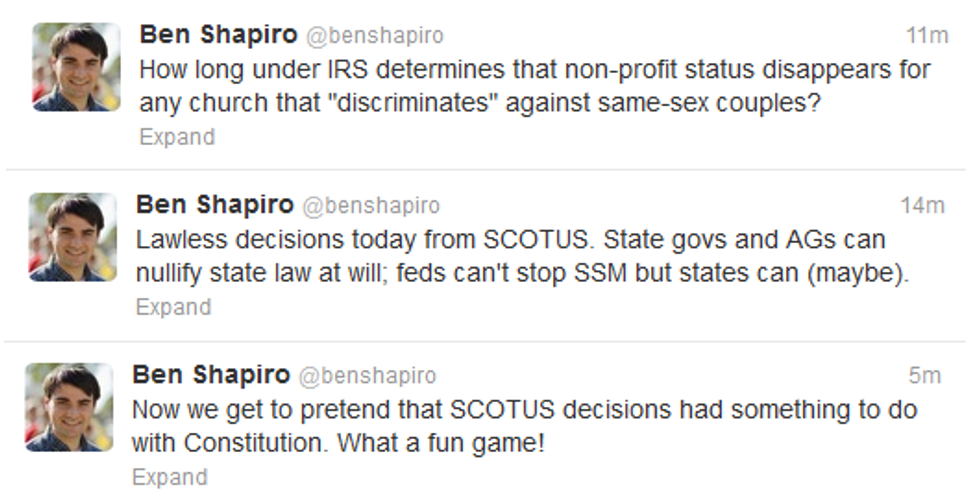 Poor Bryan Fischer! The spokesman for the American Patriarchy Association has a MAJOR sad today, and he has lots of company following the Supreme Court's decision overturning DOMA. It would appear that actually treating all marriages as equal in the eyes of the law means the end of America, which would make today roughly the 743rd time America has ended since 2008. We also see that Justice Anthony Kennedy has usurped Barack HUSSEIN Obama's appointed role as tyrant king, which has got to be pretty disappointing for the Kenyan Impostor. And we really like that phrase "sodomy-based marriage," which we'll start using just as soon as Bryan Fischer starts referring to himself as a proponent of "penis-in-vagina marriage."

Besides, as Fischer said Tuesday, there's no marriage discrimination against The Gheys!

Next up on the Wheel of Butthurt is former governor Mike Huckabee, who does not care one bit for this stupid U.S. Constitution thing:

But as a Fox News broadcaster, aren't "people in robes" a significant part of his audience?

Fox Radio bloviator Todd Starnes took time from his busy schedule of worrying about Barack Obama's plot to replace Jesus with Bo the Dog to indulge in some well-reasoned speculation about what the future may hold:

Good call, Mr. Starnes -- you and your house are perfectly welcome to follow God's law, and we are pretty sure that gay couples you've never met are not going to keep you from doing that. Isn't that nice? As to your other worries, you haven't even addressed the biggest threat: How long before the feds force you to gay marry a straw man?

And here's a surprise! Erick, Son of Erick, says he is not surprised:

And in fact, he actually did say as much back in March, when he tweeted "I've read the briefs. I'm sorry, but I still don't see how DOMA is constitutional." So score one guy that we will not yell at today! About the constitutionality of DOMA at least -- on virtually everything else related to gay marriage, Erickson is his usual dickish self. Don't worry, he's not changing!

Another county heard from: Breitbart-remnant Ben Shapiro is very, very amused at the very idea that this case has anything to do with the Constitution!

Pfft, "equal protection" is just part of the gay agenda! And America's slopes have never been slipperier!

Finally, let's close with a thought from someone who isn't a bigtime bloggovoice, but is a self-proclaimed "top conservative on twitter," just a regular man of the people:

Don't worry, though, he is only JOKING.