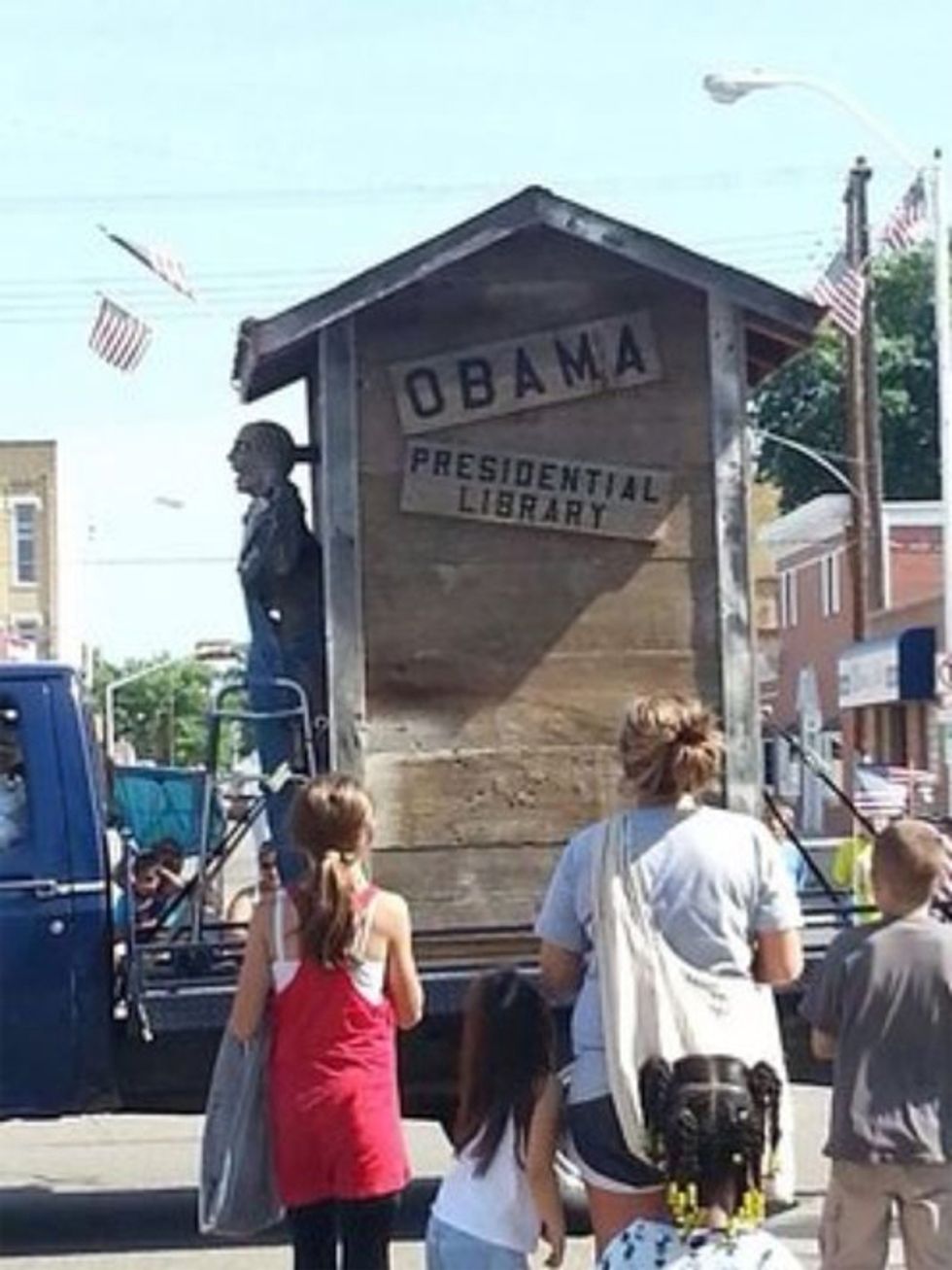 How was your Fourth of July? Did you celebrate 'Merica? Maybe you attended a small-town parade, because those are always a testament to joy and open-mindedness. You probably wish you'd gone to this cool parade in Norfolk, Nebraska, that featured an "Obama Presidential Library" float where the "library" was an outhouse, because that is some quality humor.

The float, in Norfolk’s annual Independence Day parade, was on a flatbed trailer being pulled by a blue pickup truck. The figure was dressed in overalls and standing next to a walker outside of the outhouse. The hands and head of the figure were greenish and appeared to be zombielike; the hands were pressed against the sides of the figure’s head. Miniature American flags were atop the float and on the truck.

OK, we actually get the outhouse joke, presumably because Bamz is putting America in the toilet. But the zombie thing? Is Bamz supposed to be a zombie? Is he turning American into a nation of zombies? The walker? Is Obama senile, or is he hobbling America? DO BETTER WITH YOUR CRAPPY SYMBOLISM, FLOAT-MAKER.

You will be unsurprised but completely depressed to find out that the parade organizers had no interest whatsoever in hearing any concerns about the float, probably because of freedom.

Parade committee member Rick Konopasek said the float wasn’t meant to be any more offensive than a political cartoon would be. The only restriction for entering a float is that it can’t be considered morally objectionable. That basically translates to a ban on nudity to sexually explicit messages, Konopasek said.

“We don’t feel its right to tell someone what they can and can’t express,” he said. “This was political satire. If we start saying no to certain floats, we might as well not have a parade at all.”

Yes, because the one thing that is absolutely required in Fourth of July parades is some total racist bullshit. If you don't have that, your parade actually gets shut down. Look it up.

The parade spokesdude also offered a really stirring defense of the tyranny of the majority.

“It’s obvious the majority of the community liked it,” Konopasek said. “So should we deny the 95 percent of those that liked it their rights, just for the 5 percent of people who are upset?” [...]

“For the most part, this is a strong conservative community,” Sonnenschein said. “I really don’t see anything wrong with the Obama float and I’m kind of amazed anyone is complaining.”

Well, we don't find anything wrong with a parade float full of hot gay boys dancing in jockstraps, but we're pretty sure that is not, sadly, universally loved, so one's personal adoration of a float seems to be an odd choice for the standard under which parade floats could be judged. Also too we're not sure that there's a "right" to like stupid racist shit in your small-town parade, unless that's one of those constitutional amendments we never got around to reading.

Given that the parade organizers in Norfolk insist that they'd totally accept a liberal float if anyone would ever get around to entering one, please immediately begin assisting us in planning Wonkette's 2015 Norfolk float. Remember, no nudity, because God and America hate that, but everything else is fair game.