Cops Add 'In God We Trust' To Patrol Cars, Mostly To Piss Off Atheists 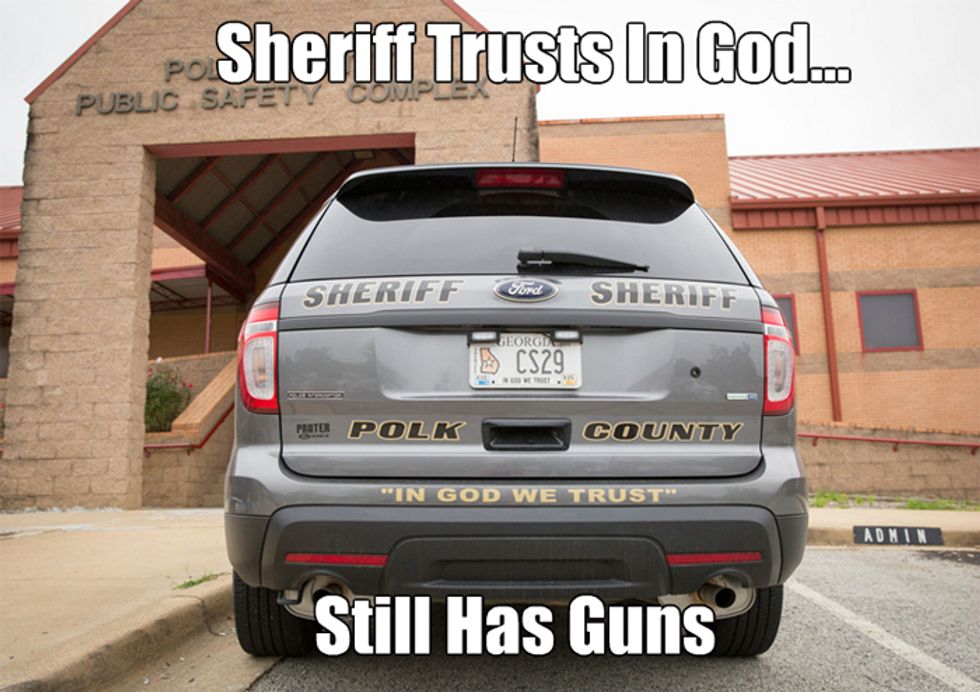 Thank goodness, America's Oppressed Christian Majority has found a new way to let the world know that, even if the mean old ACLU won't let them read the Bible all day over the public school intercom or teach the Book of Genesis in biology class, this is still a Godly nation. Police and sheriffs' departments all over the Bible Belt are slapping "In God We Trust" stickers on their patrol cars. And there's not a darn thing the atheist America-haters can do about it, because it's America's National Motto, adopted in 1956 to prove that we were not Godless Communists. It's the biggest victory for Public Godliness since the Supreme Court ruled that town meetings can start with a Jesus Prayer, so long as other weird religions are not overtly banned from offer invocations as well.

The New York Times introduces us to Sheriff Johnny Moats of Georgia's Polk County, who proudly displays a bumper-length "In God We Trust" sticker at the rear of his own patrol car. He paid for it out of his own pocket, so nobody can complain that taxpayer funds went to promoting religion. (Unless you want to argue that, as a public servant, his pocket is filled by the taxpayers, but that would be unfair.) Why? Because it's a trend, man:

In recent months, dozens of Southern and Midwestern law enforcement agencies have added the axiom to squad cars, usually to the vexation of vocal, often distant critics, and at the personal expense of sheriffs, police chiefs or rank-and-file employees.

“If it’s on my money and it’s on the state flag, I can put it on a patrol car,” said Sheriff Moats, who wrote to Georgia’s sheriffs this year to promote the motto’s placement on law enforcement vehicles. “Just about every single day, I have another sheriff calling and saying, ‘I’ve done it’ or ‘Can you send me a picture of your patrol car?’ ”

You see, it's just a way of saying "We love America and God" while also whispering "and if you don't like it, you're not really American, are you?" Besides, as Sheriff Brian Duke of Henderson County, Tennessee explains, it's a way to improve law enforcement's image:

With the dark cloud that law enforcement has been under recently, I think that we need to have a human persona on law enforcement ... It gave us an opportunity to put something on our cars that said: "We are you. We’re not the big, bad police."

And if you have a problem with God, you're also clearly a troublemaker, aren't you? You'd better stop resisting.

Annie Laurie Gaylor, of the Freedom From Religion Foundation, has some crazy ideas about the stickers crossing the line into a government endorsement of religion, merely because they mention God and people get all misty-eyed, clasp their hands in prayer, and go on and on about how America is a Christian Nation when they talk about the stickers.

"This motto has nothing to do with the problem of police forces’ shooting people, but it’s a great way to divert attention away from that and wrap yourself in a mantle of piety so that you’re above criticism," she said. "The idea of aligning the police force with God is kind of scary. That’s the first thing you’d expect to see in a theocracy."

Problem is, when FFRF sends a letter complaining that the stickers may be unconstitutional (a matter the Supreme Court has never decided, although the slogan has survived lower-court challenges to its use on currency), a bunch of God-loving Law-N-Order types hear about it and decide they want "In God We Trust" on their burgs' cop cars, too:

In Texas, for instance, the police chief of Childress, Adrian Garcia, drew attention when he denied Ms. Gaylor’s request and, in a letter to her posted on the department’s Facebook page, asked “that you and the Freedom From Religion Foundation go fly a kite.”

Sheriff Moats, for one, double-dog swears that the motto on his patrol car doesn't mean that he or his agency would ever discriminate on the basis of religion, not even against weirdo freaky people who reject the One True Living God of the Bible:

“I don’t know why an atheist is so upset about us putting up ‘In God We Trust,’ ” Sheriff Moats said. “I’m not saying that they trust God. I’m saying that we, as the guys in this department who put this on our cars, we trust in God. And why is that a bad thing? Even if you don’t believe, you know God’s all about good.”

He maintained that the motto’s presence did not signal that his department would discriminate. “You could be a satanic devil worshiper, and as long as you’re a law-abiding citizen and you need help, we’re going to help you,” he said.

You step outta line, though, and God's Own Sheriff is gonna get ya. Moats also says that the stickers are locally very popular, and that people come up to him all the time to thank him for his "brave" stand of expressing an extremely popular sentiment in an overwhelmingly fundamentalist Christian area. And if they want to buy their own stickers, he has 'em in his car, just two bucks each.

And since it's a fairly bland statement of "ceremonial deism" that doesn't endorse a particular religion (albeit it does reflect a monotheistic view), there's little chance that the public brandishing of the motto would ever be overturned in court, according to Willamette University law professor Steven K. Green, a former legal director for Americans United for Separation of Church and State: “The likelihood of success is minimal. The likelihood of creating worse precedent is actually greater.”

If Moats ever gets a letter from FFRF, he's already quite certain he wouldn't be persuaded: “If the citizens of this county want it off my car, then they can vote for somebody else, and then maybe that person can take it off.”

Otherwise, we suppose, anyone objecting to the public expression of faith would have to peel it off his cold dead bumper. After all, it's just Free Speech, paid for by the officers, and we're sure that residents of the south would be equally supportive of a Muslim cop (if, theoretically, any existed in the region) pasting a sticker with the Shahadah on her patrol car, too.