Correction: Donald Trump Did NOT Threaten To Deport All Muslims To The Moon 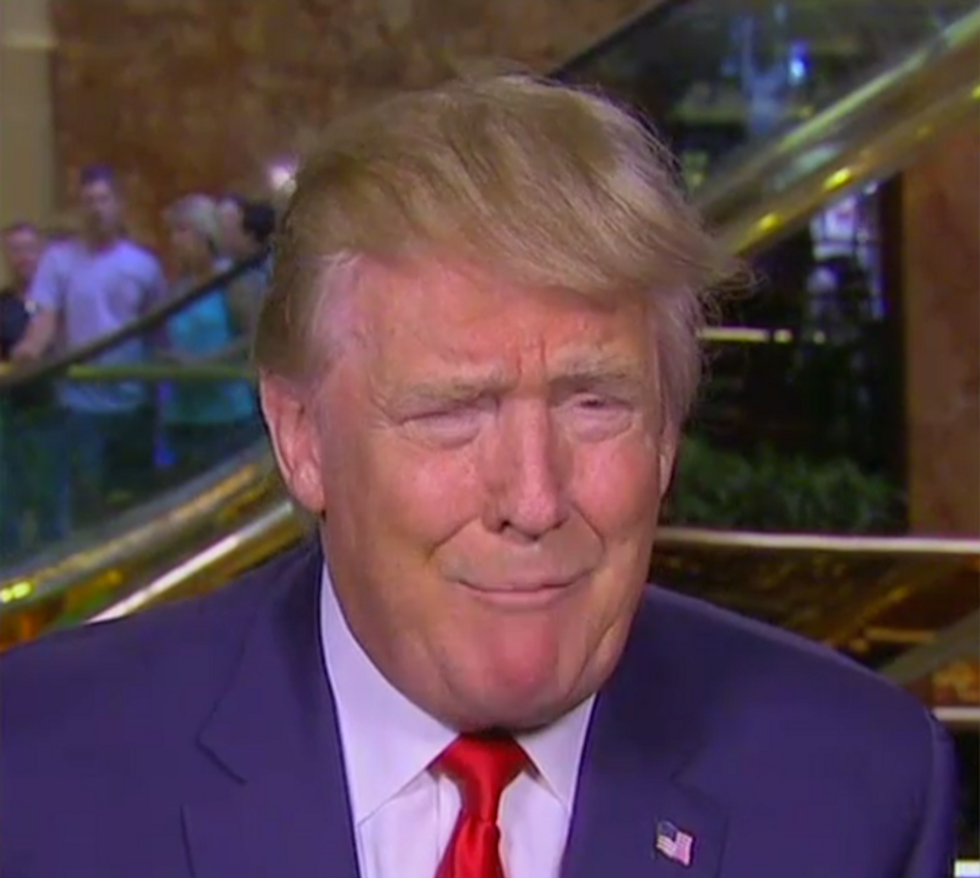 Hello, all Wonkette's favorite liberal blogs, what are you up to? Playing a game of telephone with each other, like Ben Carson telling himself his life story? Cool. Let's watch a media frenzy unfold, but let's do it backward, like reverse cowgirl!

Here is a headline from a lovely website we link to a whole lot:

Holy Nazi Yellow Stars, Batman! With all the Republican crazy talk going around on the Syrian refugee issue, it's believable, so WHOA IF TRUE. But is it? Because it doesn't exactly SAY that in the article.

Let's click on the source piece, which is from ANOTHER lovely website we link to mucho bunches:

Okay, so reverse cowgirling backward, we see we have gone from "should carry" to a slightly more hedged version where Trump "says he's open" to the idea. Does this article say he said this thing? Let's read it:

Okay, still haven't seen an actual Trump quote on creating a database or forcing the Muslims to carry special ID. Let's click back once more, to the ORIGINAL source, an interview with Yahoo. Can we read this very closely, TOGETHER?

Yahoo News asked Trump whether this level of tracking might require registering Muslims in a database or giving them a form of special identification that noted their religion. He wouldn’t rule it out.

HMMM! So Yahoo paraphrased a response to its own question, and everybody ran with Yahoo's paraphrase as if it were an actual quote from Trump's mouth.

We need some context here. Because remember LAST TIME yr Wonkette yelled at Liberal Blogotubeville for saying Trump said a thing when he didn't actually say that thing? It was September, and over the course of an afternoon, it spread like WILDFIRE that Donald Trump had told his supporters he's going to kill all the Muslims. GREAT STORY! Except for how it wasn't true. A Trump supporter asked a crazy question about The Muslims -- "When can we get rid of ’em?" -- and Trump replied, QUOTE:

Hold the phone! "We're going to be looking at that and plenty of other things" is A LOT LIKE "We're going to have to look at a lot of things very closely," from the Yahoo interview. And why? Because, if you pay attention, it's sort of Donald Trump's patented bullshit answer, for pleasing whomever he's talking to. You could ask him literally ANYTHING, and he'll say he's going to be looking at a lot of things.

Should we shoot Muslims into space? "We're going to be looking at a lot of things." Should we restart that whole slavery thing we used to do in the olden-timey days? We bet it'll be the same answer!

Gawker didn't get in on this particular game of telephone. They fucked it up all by theirselves, directly from Yahoo:

Now, we understand, in a way, because Donald Trump's campaign has been so insane from the get-go (THE MEXICAN RAPISTS ARE HERE! AND THEY BROUGHT TACOS!) that it's not hard to believe he would say this. In fact, MUST CREDIT WONKET and also MUST CREDIT NBC, Trump later did say a similar thing, when a reporter asked him, "Holy god, do you really think that thing everyone is saying you said?" And then Trump said yes, he really does think that, in part, and you know it's accurate, because of how it's a direct quote from his very own appleheaded vagina mouth:

"I would certainly implement that. Absolutely," Trump said in Newton, Iowa, in between campaign town halls.

Now THAT's a quote! It doesn't have the thing about ID cards, though, and remember, that's where this post began. And NBC's interview happened literally fucking HOURS after all the aforementioned bloggity posts about the Yahoo interview.

Here is Rachel Maddow, explaining all journalism-like how everybody's REACTION to Yahoo's paraphrase was the impetus for NBC's Vaughn Hillyard to actually get Trump to say a quote, with his mouth:

Verdict: Donald Trump said a REAL fucked up thing, about registering Muslims in databases. He said it to NBC, and not to Yahoo. Thanks, NBC!

Sweetie darlings, yr Wonkette hearts you with all the morning wood in the world, so we ask this with love: Can we all try a little bit harder to make sure we're reporting things accurately, even when things are moving SO FAST and it's hard to find our asses with both hands? Because while THIS TIME, it turned out Trump went ahead and said PART OF the thing to NBC that you said he said to the Yahoo, that's not how it usually happens. Y'all got half lucky. Or maybe y'all have ESP and yr Wonkette don't got none :(

As we wrote this post, we saw two OTHER stories, things we might like to Do Wonkette To, where we make them really funny and insightful and Pulitzer-worthy, but oops, we checked the original sources (PRO-TIP!) and we read them all the way through (BONUS TIP!) and we considered them in context of what we know about the people in the stories (NOW THAT'S JUST RIDICULOUS!), and we concluded that nope, the story whatever liberal blog writed did not bear out the OMG HEADLINE. Spoiler alert: WE DEAL WITH THIS EVERY DAY.

Can you help us out? Because we love being mommybloggers and dick-jokers and recipe hubbers and WARBLOGGERS! and adding HILARITY and GENIUS to your earnestly reported stories. And we love it even more when they're accurate.

OK, mean Wonket lecture over. See us after class, FOR SEX.

Have you liked yr Wonkette on Facebook? DO IT NOW, DUMBASS.