Cosmic Fireballs, Water On Mars, And Why House Republicans Are Like Stoned Kids, All In This Week's Sci-Blog 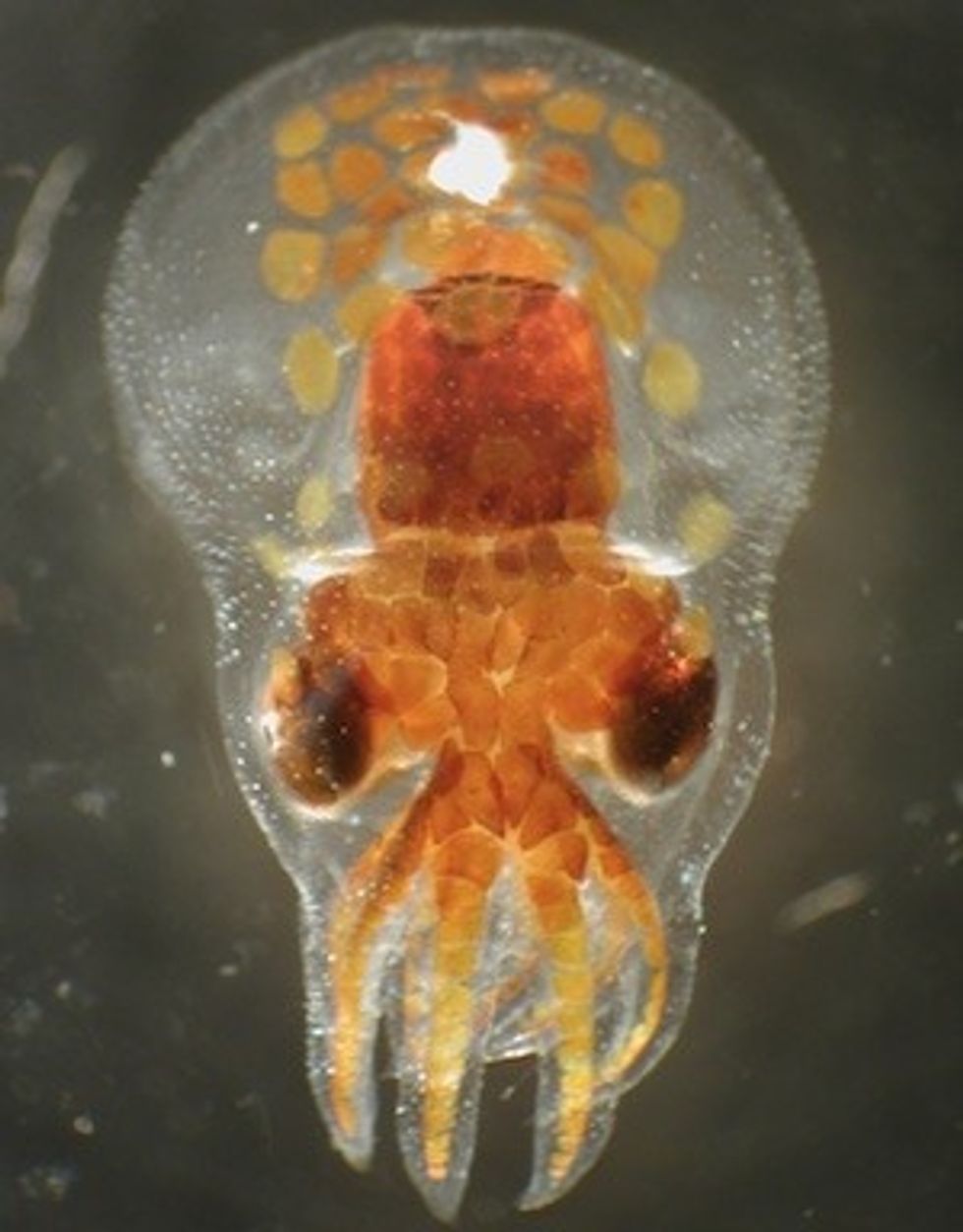 Hey there, Wonketeers! It's time once again for another appalling Wonkette Sci-Blog. Fire one up and come on in.

Sometimes it's just not a good idea to let the Stoned Kid drive.

Many years ago a group of us were driving around wearing various aspects of an Illegal Smile (as was the fashion of the time). The Stoned Kid who had been driving pulled up to the red stoplight at an intersection fairly competently and waited. So far, so good. Then, the left turn lane arrow switched to green. Stoned Kid sees the green arrow and floors the big American sedan straight through the intersection, grinning and blissfully ignorant of the enraged panel van driver he cut off.

"No, dammit! That was a turn lane! Your light was red!"

"No! The light was green! GREEN MEANS GO!"

"No, the arrow was green! Your light was red!"

"Bite me! It was GREEN! GREEN MEANS GO!"

Needless to say, Stoned Kid was forcibly replaced by a more able driver soon after and we all made it safely through that night. Sometimes you have to recognize who's able to cope with reality and who isn't.

Stoned Kid was exhibiting one aspect of a condition called Confirmation Bias. That's the tendency of people to select data and interpret information in a manner that fits and reinforces their preconceptions and personal biases. People also have a tendency to reason away evidence that challenges their preconceptions. Stoned Kid had all the available data arrayed before him -- all the other cars stopped at the intersection, the cars moving through the intersection, the red lights in front of him and of course the green arrow. He chose to believe the one data point -- the green part of the green arrow -- that reinforced his belief that ok, this light's been red long enough & now it's time to go! He rejected all the other data as irrelevant or ignored it outright.

Confirmation bias can happen to anyone -- not just Stoned Kids. (Cold Fusion, anyone?). It's particularly insidious as the data selection and interpretation bias happens subconsciously. This is the reason that science has developed strategies like controlled experiments,blind experimental trials and subjecting new scientific claims to rigorous community Peer Review. Nothing's perfect (there have been notable examples of Peer Review failure, for instance) but on the whole scientific methods limit bias and act to insure the quality of the observations and conclusions we make.

There's a classic psychological study on confirmation bias from 1979: Biased assimilation and attitude polarization: The effects of prior theories on subsequently considered evidence. Here,two groups of people were selected, one group in favor of the death penalty, and the other group opposed. Each group was presented with two scientific data sets: one set that supported their pre-concieved view and one that challenged it. It's not surprising that each group was more highly critical of (and found all the inconsistencies in) the datasets they didn't agree with while completely overlooking the problems with the data they did agree with.

Now, you don't have to go back into the literature for good examples of Confirmation Bias. All you need to do is turn on the news. We have a Republican majority in the U.S. House of Representatives now that's wholeheartedly embraced Confirmation Bias as a way of life. Here's a 2011 interview with the then-outgoing chair of the House of Representatives Science Committee Ralph Hall saying that all the world's climate scientists are totally making up Global Warming data just to get funding. Here's Dana Rohrabacher (R-Mongo) with his idea to combat global warming: cut down all the trees. Who can forget the remarkable statement by Rep. Paul Broun (also on the House Science committee) that most of the very foundations of modern science are "lies from the pit of Hell"? There's Rep. Phil Gingrey, an Ob-Gyn and chairman of the GOP Doctors Caucus, who's convinced himself that rape victims can will themselves not to get pregnant. These are just a tiny random sample pulled from the near continuous tide of lunacy that bellows from half of our government.

It's not at all surprising that the folks in charge of the modern Republican party believe this way. They exist in a bubble of self selected data of their own design.  The heavily gerrymandered districts the congressional representatives are elected from feature a voting population that has been fed an increasingly biased news dataset, from right wing radio and FOX "News" over the past 30 years.  The Right's painstakingly assembled media machinery is ubiquitous, well financed, efficient and dedicated to promoting one set of data and discrediting others. It's been a smashing success over the years, driving the country rightwards in a continuously self-reinforcing loop of Conservative beliefs. There's been great success, for instance, in convincing a great number of people that a modest, center-right private enterprise centered national health insurance plan that started out in the offices of the Heritage Foundation is a socialist plot to sap expand=1] and impurify all of our precious bodily fluids.

Now, though, the machine has become the victim of its own success. The Republican Party just endured a disastrous 2012 election where their national platform was so odious that they lost the presidency (Paul Ryan lost his home state and hometown of Janesville, lest we forget), lost seats in the U. S. Senate, lost seats in the House (and only kept control due to the extreme levels of gerrymandering after the 2010 census), and lost on "culture war" issues like marriage equality. Some of the most reviled state governors in the nation are Republicans who interpreted the 2010 election as a green flag to implement a host of deeply unpopular policies. Congress's public approval ratings have plummeted to unprecedented low territory, only rising when they're out of town and not causing trouble or talking on TV. You would think that Republicans would want to pause to reevaluate their data, preconceptions and methodology. Perhaps take a course correction. Well of course, that's exactly what they are not going to do.

This weekend we're treated, once again, to the spectacle of a pair of wholly unnecessary artificial economic crises that have the potential to  grind the government to a halt, cripple the nation's economic recovery, send the world's economy into a depression-like tailspin or all three. All this because House (and a few Senate) Republicans have selectively believed data that tells them that it would be  a great idea to use two must-pass economic bills as economic blackmail to force elements of their political agenda that have been rejected by the majority of voters in the last national election. Who does this sort of thing? Not responsible legislators, surely. It's a sign of just how crazy the box the House has put itself in when shutting down the government is the least bad option.

Of course, in the Republicans' minds, enacting a legislative agenda through economic terrorism is a reasonable course of action that will be rewarded by the general public, when everyone just realized how right it is. The lessons of the last shutdown are dismissed out of hand and the catastrophic threat of a national debt default is soft-pedaled, ignored, or outright denied. I think we all know how all this should end: with clean CR and debt ceiling bills, no conservative Christmas in October, the hard right going down to defeat and a more moderate Republican legislative faction working together with Democrats to solve the nation's problems. If only that would be true.

The Republican Party, victims of their own extreme Confirmation Bias, are the Stoned Kids who are simply too stoned to drive. They've driven us up to the point of disaster and it's past time for the American public to take the wheel away. Until they sober up, or wise up. Whenever that may be.

If you had to sit through any of Ted Cruz's 21-hour jawfest and you want something to blame it on, you're in luck! Paleontologists in China have unearthed a 419 million year old fossil that's thought to be the earliest fish found with a jawbone.

Well, now you've done it. The online magazine PopSci will no longer allow comments on most of its articles. Popular Science's Online Content Director Suzanne LaBarre cited a lack of resources to police the comment sections, as well as studies that found online comments perpetuate bias and are bad for science . We think that they're just tired of all the dick jokes. Not us here at the Wonkette Science Desk --  we look forward to your dick jokes.

Like glaciers all over the planet, Alaska's Mendenhall Glacier is in retreat. Over the past 50 years, the odd log and stump have appeared out from under the melting ice. Now, though, an entire frozen forest has been uncovered by the retreating ice flow.

Around two million years ago -- when our ancestors were just learning to walk upright -- the central black hole in our Milky Way galaxy emitted a huge flare that lit up the night sky. Wonder what they thought of that?

Our Moon may be 100 million years older than we thought. Geochemist Richard Carlson of the Carnegie Institution of Washington has come to this conclusion by reanalyzing radioactive dating of the lunar rocks collected by the US's Apollo missions.

NASA's Curiosity rover has found a not inconsiderable amount of water in the soil of Mars. There's about two pints of water in every cubic foot of Martian soil, but it's all bound up in minerals. For now.

Here's something you don't see everyday: a fireball lighting up the sky over Greenwood Indiana. Captured on Friday, the American Meteor Society (which keeps track of such things) says that shooting stars are seen frequently this time of year. Their site also has a handy Fireball FAQ

Have a computer, patience, time on your hands? Want to help out some swamped Plankton Scientists? Well, the Plankton Portal Project is calling for volunteers for a crowdsourced project to help categorize and classify a huge trove of visual zooplankton data that's been collected by the automated In Situ Ichtyoplankton Imaging System (ISIIS). Here's some more information from New Scientist. There's millions of images and I'm sure they're all awesome!

I have mixed feelings about this. A small aquaculture facility off the coast of Yucatan in Mexico has, for the first time ever, successfully developed a method of raising octopus in a fish farm. So far, they've cultured one species, Octopus maya or Mayab mollusks. If this technique can be scaled up and transferred to other species, it could be used to take the fishing pressure off local octopus populations and perhaps used to culture endangered species.

On that note...we have not one, but two Cephalopod Videos for the day -- courtesy the good folks at Deep Sea News. Here's a couple clips of the deep sea squid Octopoteuthis attacking a toilet brush attached to an ROV:

Well, the next time a squid attacks you in the bathroom you'll know what to do. Isn't this blog informative?