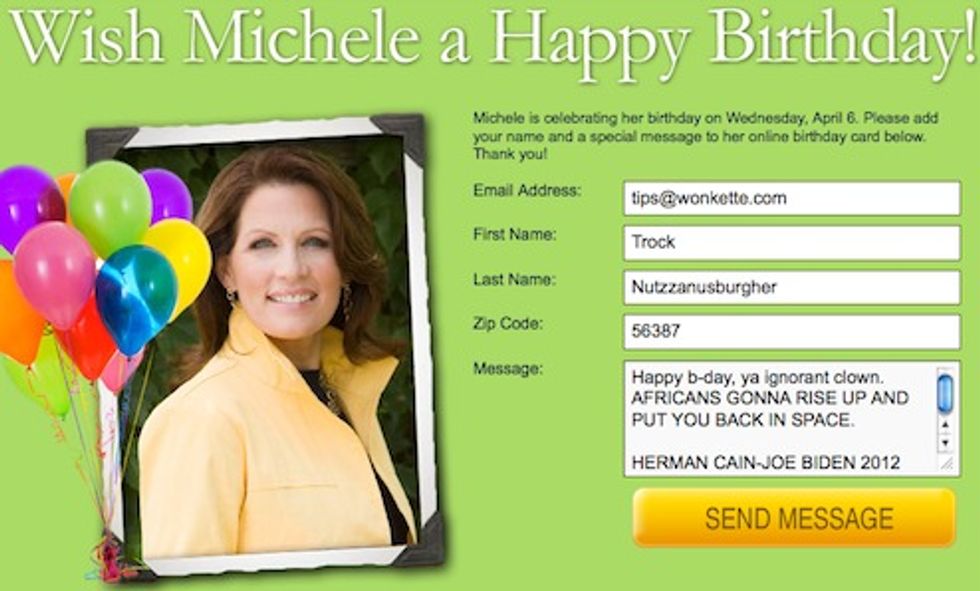 Suburban Minnesota monster Michele Bachmann is celebrating her 55th birthday today, probably by playing "pin the gun on the Kenyan." When the certifiably insane foster-baby farmer won her congressional district seat back in 2006 (the "Year of the Democrats," haha), who knew that she was less a clownish anomaly than theactual future of the Republican party. Who knew that this proudly ignorant, lie-spouting duckface would soon come to represent the entirety of Republican thought? When she locked her flapping lips onto then-president George W. Bush's face at the State of the Union address back in 2007, who knew that such freakish, embarrassing behavior would soon define the entire GOP and its willfully ignorant "angry white oaf" division, the Tea Party? Congratulations, Michele! You've made "stupid" go mainstream in Washington!

Michele changed all that. No longer would Republicans have to even pretend to know history or understand budgets or even be able to read the basic notes staffers prepared before another Fox News appearance. Just say whatever, and look crazily at something way off in the distance, and repeatedly call the president a spooky African. Winning the future!

Also on this day:

1929: Louisiana Governor Huey P. Long is impeached over his nickname, "The Kingfish."

Happy April 6, everybody! Go leave Bachmann a birthday message on her "e-card."