Crazy Tongue-Speaking Prophet Lady Running For Mayor ... Of Our Hearts! 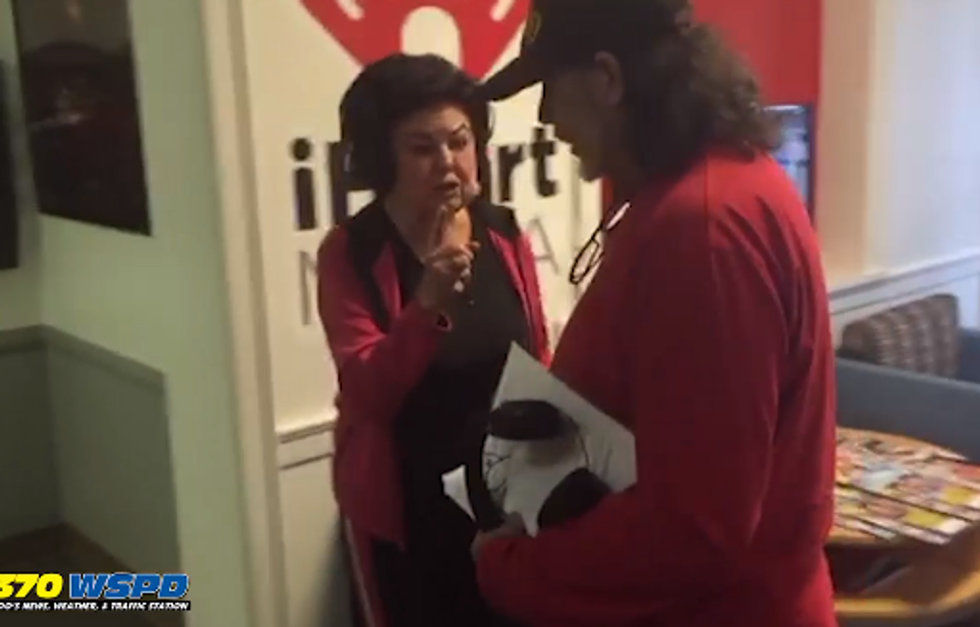 Wonkers, are you ready to meet your new best friend? Her name is Opal Covey, she is 75 years old, and she is running for mayor of Toledo (Ohio, not Spain, geography nerds). You excited yet? Did we mention how she speaks in tongues and how she says she's a prophetess who talks to Jesus directly, probably on her Obamaphone? In fact, she says she's not even "running" for mayor, but rather  "reclaiming" the mayor's seat, which is rightfully hers because God said, way back in 2000, that she was supposed to be mayor. So she simply MUST run, over and over again, until her God finally gets off the shitter and waves His magic wand to install her as His rightful queen of Toledo. Yep, she's GREAT, and she is your new best friend.

Opal stopped by the WIOT 104.7 radio studio in Toledo to talk about her campaign platform, which, according to the Toledo Blade, basically consists of "Let's build amusement parks downtown, marijuana lets the devil into your wiener, and also red light cameras fuckin' suck, amirite?" But apparently everything went wrong on the radio, because she ended up having to speak tongues at the DJ, Fred LeFebvre, and rebuke him in the name of Jesus, because he didn't take her seriously.

Watch the video of this crazy lady speaking in tongues at the nice man, and laugh so many times:

HAHA WE ARE JUST PULLING YOUR LEG WITH A KNEESLAPPER, that is not the crazy Toledo candidate Opal Covey, that is the Swedish Chef making poutine in Montreal! OK, here is the for real video: Because we love you, here is some of the transcript:

This Word [her Bible] will rebuke you. And I don't know what God is going to do. But you are comin' up against the works of the Lord. And you're not accepting it, and you're doing retaliation on me, of course you are ...

But then Fred the DJ pointed out that, since she (LOL) hasn't ever been elected mayor, she's actually, BIBLE FACT, a false prophet. WHERE'S YOUR CHRIST NOW, DEVIL WOMAN? That's when the shit hit the fan:

Right now, because you have called me a false prophet, TO MY FACE, I will wipe the dust, the VERY dust of my feet off against you, as a testimony against you. And whatever God does, the people will see it. ... I rebuke you, and I curse the evil spirit within you, that what you have done to destroy me this morning shall destroy you ...

Then Jesus Christ, who died for your sins, enters Opal suddenly and starts speaking savior gibberish through her mouth, to rebuke Fred for being evil:

Fred the DJ explains he doesn't speak DSM-IV gibberish, but is nice enough to reply with an "A-wimoweh, A-wimoweh" and a "Kumbaya." Fred is our new favorite, and Kaili MAY have said she wants to marry him in the chatcave.

Now, we are suspicious of Opal's tongue-speaking, because USUALLY when you speak in tongues in order to rebuke somebody like Fred the DJ for being a bad demon man, you don't actually stop to explain that you are speaking in tongues right now. But maybe Ms. Covey studied under a different Pentecostal snake-handling pastor from the one yr Wonkette went to when we were a small boy. (Just kidding, our parents are not insane, we were raised nice and WASP-y, as you probably suspected.)

As Fred the DJ is kicking Opal out (which makes her MAD and forces her to blobber blobber some more), he asks if she wiped the dirt from his evil off enough, because obviously he doesn't want to send her out into a lonely, dangerous world all covered by his demon dust. Again, we like Fred very much.

Now look, Wonkers. This lady MIGHT be for real mentally ill, so if it comes out that she's been diagnosed with a brain problem, you have to stop making all the jokes RIGHT THEN AND THERE. Until then, fuck it, have fun!