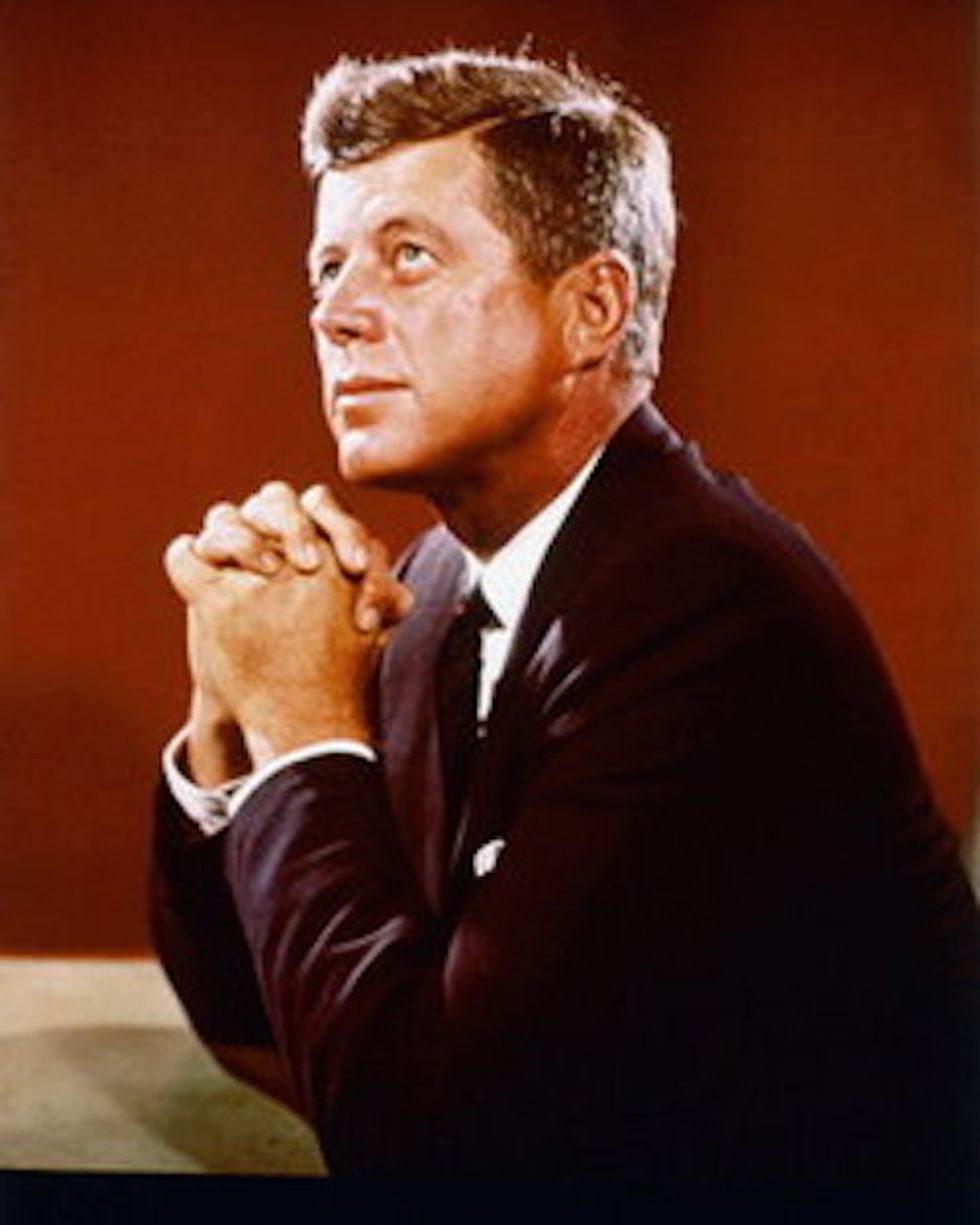 It's that special time of the year. The Super Bowl is over, we are still reeling (or happy, if you're into that sort of thing) over the Worst Play Call In History, and wingnuts have now had a couple days to decide which of the commercials were the evilest and demonic-est of them all. Ken Ham, that creationist nutbag who debated Bill Nye The Science Guy last year, and who is pretty sure that all nonexistent aliens burn in hell, has made his decision, and the winner of this year's post-Super Bowl Two Minutes Hate will be Carnival Cruise Lines, who had the utter gall to make a commercial that featured a nice quote from John F. Kennedy, about how we all love the ocean because we used to live there before we lost our gills during Evil-lution. Here is that Kennedy quote, for your handy reference:

“I really don’t know why it is that all of us are so committed to the sea, except I think it’s because in addition to the fact that the sea changes, and the light changes, and ships change, it’s because we all came from the sea -- and it is an interesting biological fact that all of us have in our veins the exact same percentage of salt in our blood that exists in the ocean, and, therefore, we have salt in our blood, in our sweat, in our tears. We are tied to the ocean. And when we go back to the sea — whether it is to sail or to watch it -- we are going back from whence we came.”

Uh, sorry, John F. Kennedy and fancy boat company, but Ken Ham knows that you are A Idiot, humans aren't some kinda guppies and Goddidit. He responded on his Answers In Genesis website:

Don’t you just feel this “personal connection?” After all, your ancestor came out of the sea and evolved by natural processes to produce you. Don’t you feel the connection? Don’t you just want to go on one of their cruises so you can stand on the deck of a big cruise ship, look at the sea, and contemplate your accidental beginnings -- and perhaps worship the sea, because it gave birth to you!

Oh -- and really, you can spend a lot of money on such a cruise, but because you evolved from the sea and are just an evolved animal, and when you die you won’t even know you existed -- so you won’t even remember the cruise -- so what’s the point anyway? You just evolved to have an ultimately meaningless existence!

So we have Neil deGrasse Tyson in his cosmos series telling us we are all stardust—we are children of the stars.

And the Carnival Cruise Corporation telling us we all came from the sea.

So—worship the stars and worship the sea! That’s the increasing state of our culture as it abandons the truth of God’s Word.

Yeah, all you dumb science people, don't you understand that we already HAVE a science book that explains these things, and it's called the B-I-B-U-L? Never mind the whole part about how we actually ARE star stuff (fact) and our ancestors, way back when, did indeed come out of the ocean.

So, of course, because Fundamentalist Christian dinguses are all convinced that everyone secretly believes as they do, and because they think they represent the mainstream of their own religion, a few of them took to the Twitter (also created by God, duh) to express their displeasure at the newfound atheism of Carnival Cruise Lines. If you watched the ad above and listened to those words from JFK and you're not getting how any of that implies that Carnival Cruise lines is an atheist god-hater, that's because you are not a dumb creationist jackhole like this guy:

TheFrisky has collected other tweets from regular creationist folks, noting that they are outraged, because they DID NOT crawl out of the ocean, thank you, you dumb libs, and they're PRETTY SURE they can't breathe inside the ocean either, though I wouldn't put it past a few of them to try. Also, this wingnut lady who just straight up calls Carnival Cruise Lines a mean name and points out that her disturbed god did not even USE the sea when he was creatin':

Not that we don't trust that Robyn is S-M-R-T, we happen to have a B-I-B-U-L behind us on our bookshelf, so we decided to find out if God USED THE SEA, let's turn to the first page, second verse, "and the spirit of God was hovering over the waters." Newsflash, creationist moron people: HOVERING is USING.

Also, your ancestors had flippers and some of you probably still do and are very embarrassed by them.

Anyway, so John F. Kennedy and a fleet of unsaved boats are the devil, Goddidit, the end.