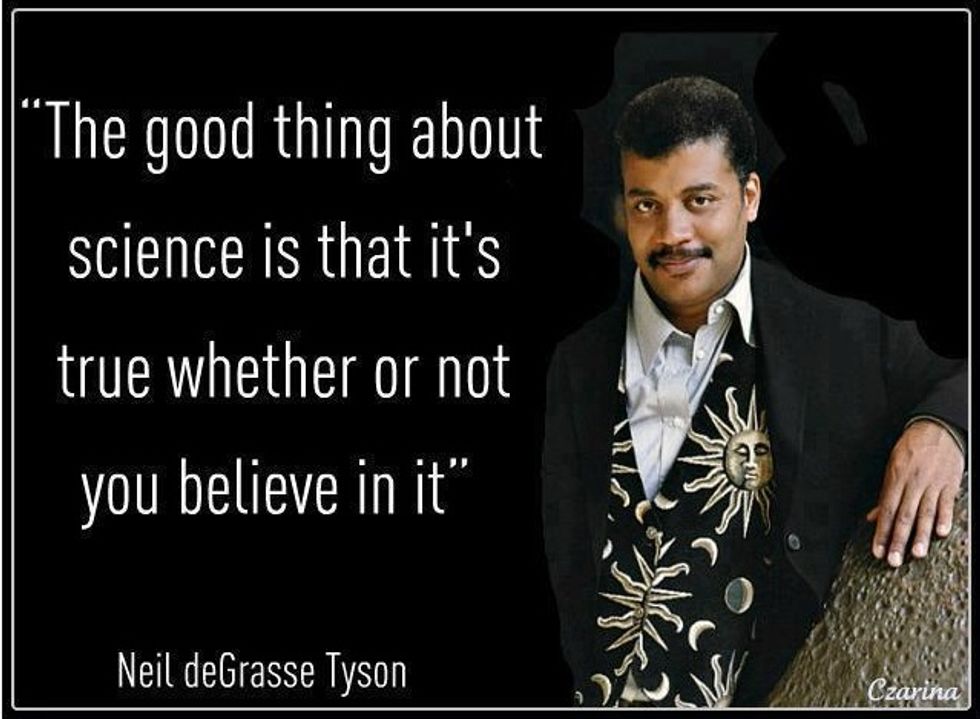 Neil deGrasse Tyson has won himself yet another accolade! The creationist Discovery Institute has named Tyson "Censor of the Year" for his outstanding achievement in "thwarting an open and informed discussion of science and scientific controversies" -- in other words, for insisting that evolution is real science and not recognizing that creationism is totally real science, too. Here's part of their Very Science-Based citation, from Discovery Institute's very neutral-sounding website "Evolution News and Views" (ENV):

Neil deGrasse Tyson, of course, stands out this year for his command of the aptly named Ship of the Imagination, which he piloted through 13 episodes of the revived Carl Sagan science series, Cosmos. As we documented here at ENV and in a book, The Unofficial Guide to Cosmos: Fact and Fiction in Neil deGrasse Tyson's Landmark Science Series, Cosmos represented a highly imaginative rewrite of the history of science. It was designed to convey an impression that faith was always an obstacle to scientific discovery, that all legitimate scientific controversies are in the past, that skeptics of scientific orthodoxy today are fools or worse.

We've swapped in Yr. Wonkette's Amazon code up there, should any brave soul wish to buy the Discovery Institute's dumb book, just in case you want to buy it. Which you still shouldn't, but at least we'd get a kickback.

The award goes out every year on Charles Darwin's birthday, which would be today. Or if you're the Discovery Institute, it's "Academic Freedom Day," to celebrate the freedom to pretend that science is whatever you want it to be. Or if you're creationist Ken Ham, it's "Darwin Was Wrong Day." So much to celebrate!

The Discovery Institute is really gracious to Tyson, too. Or at least they are, a little, after noting that the "militant atheist" who murdered three Muslim students in North Carolina was a fan of both Neil deGrasse Tyson and the Freedom From Religion Foundation. But they do acknowledge that unlike other evolutionists, Tyson doesn't even threaten physical violence to creationists, which we guess is a real big problem these days. In fact, the big problem with Tyson is that he's just too darn nice-seeming (though ultimately evil, of course, because he's a censor):

The charming, avuncular, facile Neil Tyson is effective ... because he is so very likable. As a censor, he works with an airbrush. Clearly produced with an audience of impressionable young people in mind, and no doubt on its way to becoming a staple in school science classrooms, Cosmos tells a seductive story that leaves out complications and controversies around science, and casts materialism as the obvious inference from the scientific data.

What a subtle thug that Neil deGrasse Tyson is, telling innocent children that science is only concerned with what is observable and measurable, and not with other very true evidence like the Book of Genesis! Even worse, Tyson's Cosmos was endorsed by no less a villain than the President of the United States, who committed culture war by taping an introduction to the series. Also, the new Cosmos endorsed Carl Sagan's God-hating views right in its very first scene, which included tape from the original 1980 series, "in which Carl Sagan professes his allegiance to materialism: 'The cosmos is all that is, or ever was, or ever will be.'"

So congratulations, Dr. Tyson! You have all the right enemies!