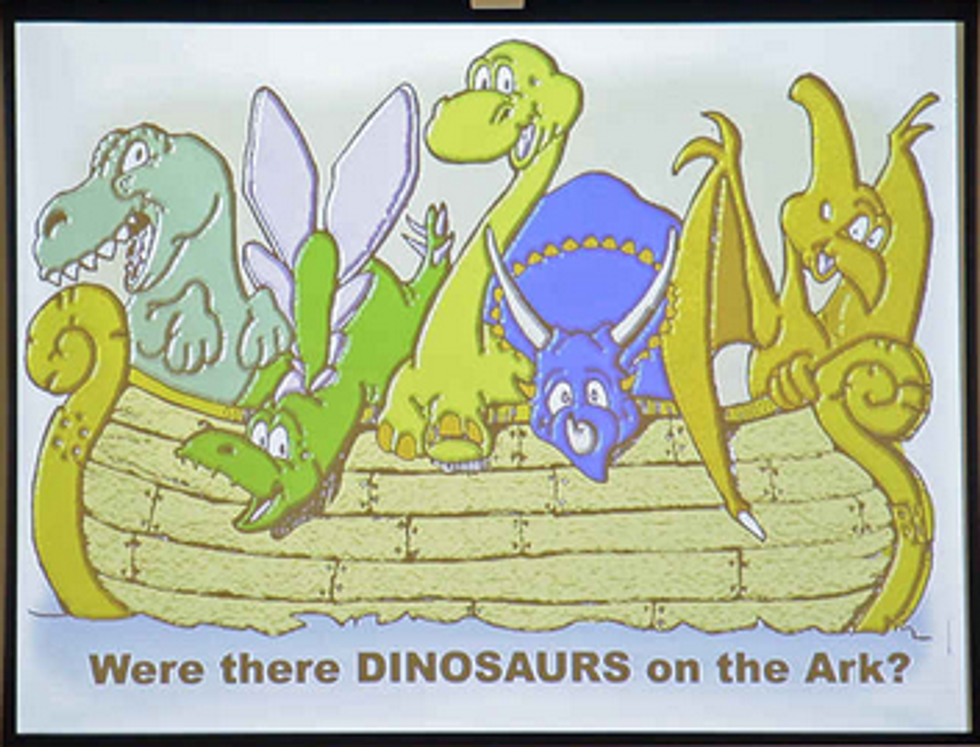 Aspromised, creationist Ken Ham and his Answers in Genesis/Ark Encounter Consortium of Idiots have filed a frivolous lawsuit against the state of Kentucky for denying them $18 million in tax incentives to build a big land boat Jesus theme park, because the state is mean and says Ken can't do religious discrimination against people who might seek employment with them. After much wrangling, the project was finally denied the incentives late last year when Kentucky found job postings for the theme park that clearly included religious provisions. Boom. No sweet government cash for you! From their truly stupid lawsuit:

"Defendant Kentucky state officials discriminated against Plaintiff organizations by wrongfully excluding them from participation in the Kentucky Tourism Development Program. Plaintiffs have been denied access to this tourism incentive program because of who they are, what they believe, and how they express their beliefs, in flagrant disregard of their constitutional and statutory rights."

Ha ha ha, no, that is not what happened at all! We know that the Muslim Brotherhood and their faithful partners, the homosexuals, have taken over many things and banned Christians from existing in many places, but not in Kentucky yet. They still like their religion, lots! They just don't like lying, smarmy brats like Ken Ham who won't follow the law.

Because that's all this is. Ken Ham's entire complaint is that he doesn't want to follow the laws as they're written, and that is NO FAIR. Kentucky won't let a for-profit corporation have a special exemption to only hire people who believe Noah and Jesus had chickenfights with dinosaurs on a big boat because that one year it rained a bunch, AND THEY HAVE TO BELIEVE IT LITERALLY, as opposed to some namby-pamby "metaphorical" interpretation of the story. Therefore Kentucky is discriminating against their religious right to religiously discriminate against Kentuckians, right, this all makes sense, god, Ken Ham is an idiot and this lawsuit is going NOWHERE.

Of course, when he loses, this will be yet another example of JUDICIAL OVERREACH!!!1! and fascism and whatnot, and Ark supporters will conclude, not that perhaps they are asking for for truly special religious rights to be assholes, but that Kentucky clearly has been invaded by the evolutionist liberal hordes, intent on persecuting them to death. Because this is a cycle really, with these sorts of Professional Victims. The most important thing they must answer at all times is, "how are WE the victims in the invisible battle with the Devil that is currently being waged in the sky?"

And all because the government won't give them free money to pay for their religious right miniature golf course, WELFARE QUEENS.

The lawsuit spends several pages detailing things like "the Noachian Flood was a significant geological event and much (but not all) fossiliferous sediment originated at that time," and "those who do not believe in Christ are subject to everlasting punishment," which, fine, Ken Ham, whatever, everybody but you is going to hell, but this is a LAWSUIT about TAX BREAKS. Besides the fact that "fossiliferous" is a truly funny word to say and type, it doesn't matter, because just above that section of the lawsuit, it is explained that the plaintiffs, "Ark Encounter, LLC" are a FOR-PROFIT corporation, and thus subject to Kentucky's nondiscrimination laws. That one simple fact means this 48-page lawsuit is, in a sane world, dead on arrival.

Now yes, it is also explained that Crosswater Canyon, a non-profit subsidiary of non-profit Answers In Genesis, is the sole member of Ark Encounters, LLC, and tells us a long and winding story about WHY they had to form the LLC (investors!), and that's some legal dicking around, sure, but Ken Ham, so sorry, you done legal-dicked yourself into a corner on this issue when you decided to LLC Noah and his wife's wet and wild party with the cast of Barney and Friends.

The full lawsuit can be summed up into one sentence: "Yes, we know we are subject to these laws, but no fair because Jesus was friends with dinosaurs." I mean, what a glorious waste of Kentucky's time, especially when Kentucky was EXTREMELY accommodating throughout the entire process.

And here's a fun part for you. About halfway through, we learn that Ken Ham and his creationists were told by the state of Kentucky, IN 2009, that there were concerns over the "separation of church and state" issues relating to Kentucky's tourism act, which provides the millions of dollars in incentives in question in this lawsuit, and so Ken and pals started looking for real estate in other states. But in 2010, Kentucky officials "indicated the religious nature of the project would not be a barrier for receiving the Act incentives," so they went ahead and did Kentucky. NOW, since we are dealing with fundamentalists, you are probably thinking, "yeah, but there's got to be some sleight of hand in the way that's worded," and you would be correct! What Kentucky did NOT say, according to the filing, is that Ken Ham and the Bible Boys would suddenly be exempt from following Kentucky's laws! And why would they? Kentucky probably thought they were dealing with sentient adults and wouldn't have to spell that out. (Big mistake: somebody should have reminded Kentucky what a Creationist is.)

IN FACT, the lawsuit states that Kentucky made it good and damn clear in 2010 that the Ark Encounter day-spa/bar and grill would not be able to discriminate in hiring based on religious beliefs. Ken Ham thought this was weird and mean, because that's not specifically laid out in the tourism act, because apparently he is unable to understand the concept of "it's already the law in Kentucky in the first damn place, why would we feel the need to write it again? Jesus!"

Ken Ham would have you believe that Kentucky is suddenly crucifying Jesus because of the "religious nature" of his gigantic bible boat, but they're not. They're still mostly fine with the religious message of it. They're simply not fine with Ken Ham refusing to hire people who don't LITERALLY believe in flood, as if it matters whether the person selling concessions for seven bucks an hour thinks the Devil buries bones in people's backyards to deceive them into believing in evolution. I bet most of the employees at Disney World haven't accepted Mickey Mouse as their personal lord and savior either, but I don't hear Mickey bitching, my god.

Also, Answers In Genesis/Ark Encounter/Biblesaurus Rex AGREED to the provision, but thought, "well hey, they don't have to be CHRISTIANS, but they have to believe in a literal biblical interpretation of the flood, so QED, right?" Unfortunately, that is, um, a fundamentalist Christian religious belief, therefore that's discriminating on the basis of religion, duh. Kentucky has also continually expressed concerns that the park would be used to proselytize and indoctrinate, because Kentucky has been to Ken Ham's website apparently and done a little research on the creep, so we are guessing that the state has wised up to how this guy works.

Now to be clear, are they denying Ham the right to build Bible Land? No. He just can't have any of that sweet government cash if he's going to discriminate or proselytize. Kentucky is saying, in essence, PICK ONE. Do you want cash or do you want to be a turd?

Sorry, Ken, bad lawsuit, there is no third option which allows for both, so go away.