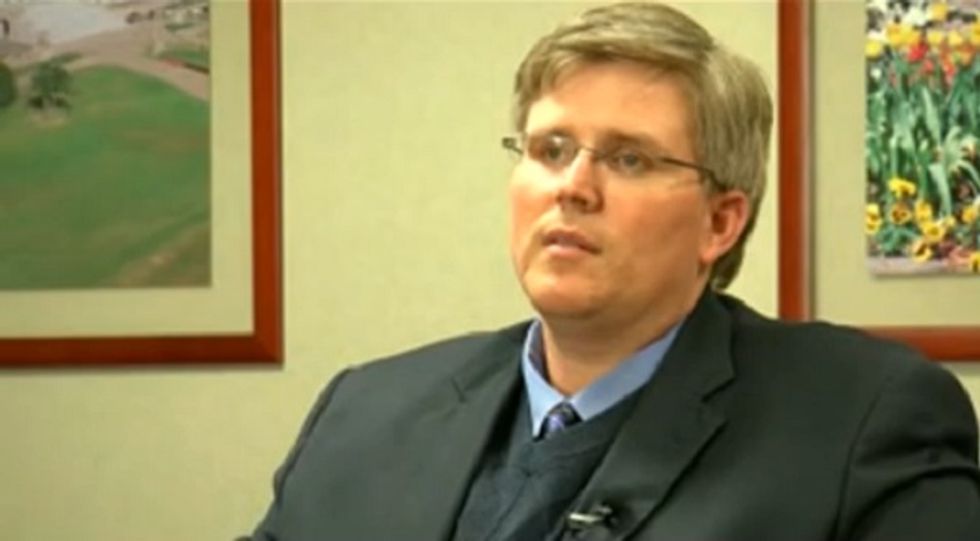 Oh Christ, it's This Asshole Again

Remember our old pal Justin Harris, the fundagelical Arkansas state representative who "rehomed" his two adopted daughters with a good Christian man who then raped one of them? As you may recall, in addition to sponsoring restrictive abortion laws and being an excellent role model of how never to parent, Rep. Harris is also an entrepreneur who co-owns "Growing God's Kingdom Preschool" in West Fork, Arkansas, a godly little daycare that gets most of its money from state and federal funding, while Rep. Harris proudly proclaimed that government has never created a single job, ever. That guy. Turns out that one of the preschool's employees almost Grew God's Kingdom by one child Wednesday, when a driver left a 3-year-old girl strapped into a school van for several hours. The little girl lived, so now the only thing left to determine is whether the school endangered her by having inadequate safety measures (like "count all the children twice, you morons") or whether her enrollment at a Christian daycare actually saved her life because the Lord Jesus was looking over her the whole time.

[Police Chief Bryan] Watts said that the child, who had been strapped into a car seat, wasn't injured. He said the girl was conscious and talked to paramedics when they arrived.

"We're very blessed that it was a little cooler today and the van was parked in the shade," Watts said. "If it had been much warmer, I don't think she would have survived it."

Rep. Harris explained that the van's driver didn't notice that the girl was still in the van after the other kids got off and also credited her survival to divine intervention:

Harris said it was a cool, cloudy day, and the child's body temperature was 97 degrees when paramedics arrived.

"So thankful to God that it was a good day," he said.

Harris said the school has "procedures in place" to prevent such incidents from occurring.

We can't help but think that if God were really on the ball, He might have arranged for the driver to actually follow those procedures, or perhaps would have provided better guidance in their planning and implementation, rather that tinkering with the weather to make sure the kid lived, but He's got that whole "Mysterious Ways" reputation to maintain.

Chief Watts explained how the procedure was supposed to work: The van has an alarm that goes off when the door is opened, and the driver has to go to the back of the van to turn it off, checking to see that all children are off the van. Which is exactly what the driver did Wednesday, except for the "failing to notice one child still sitting right there in a car seat" part. The girl was left in the van around 9:30 a.m. and not found until about 1:30 p.m., when the school started returning children home.

Also too, Amy Webb, a spokesperson for the Arkansas Department of Human Services -- the same agency that happened to handle Harris's adoption, so hi to them again -- explained that state regulations required both the driver and an official from the preschool to check a roster of children transported to the school each day. Given Rep. Harris's objections to government interference in private enterprise, it may be that Growing God's Kingdom saw no need to be constrained by such burdensome mandates. As we learned when the adoption scandal broke, Harris had actually introduced a bill to loosen fire safety regulations on preschools, after all.

Webb did say that the van driver had been fired, so there's that. Licensing staff will be visiting the preschool to investigate; Chief Watts also said that the incident is still under investigation and that no criminal charges have yet been filed. Again, considering that this story involves Justin Harris and children, we'd strongly advise a check of the van driver's basement and attic, just to be on the safe side.