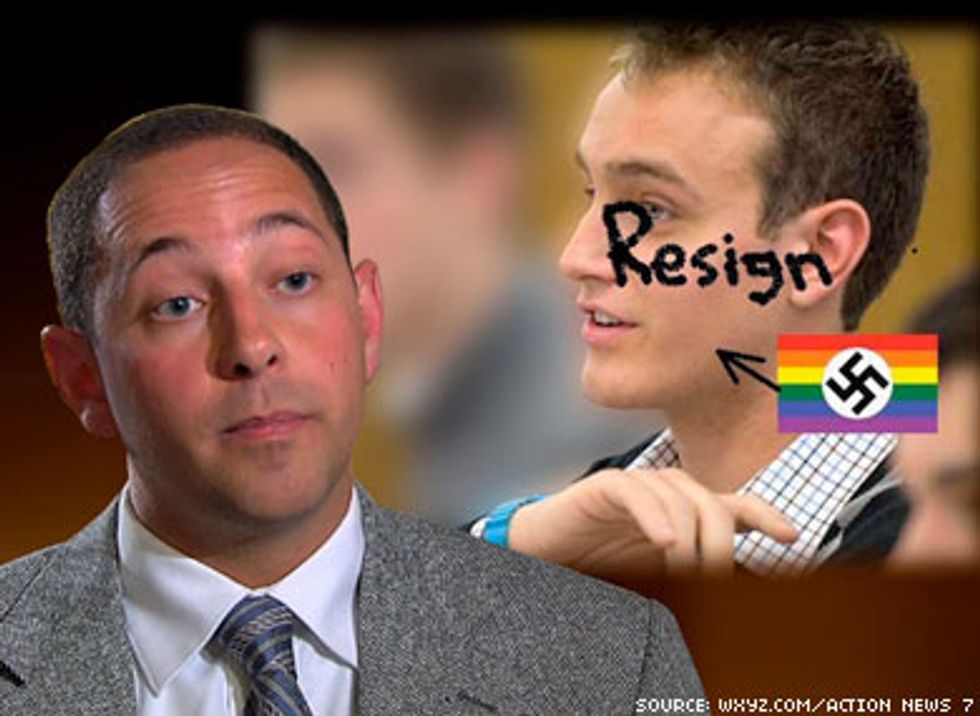 You may remember Andrew Shirvell from a few years ago. He was the bonkers assistant attorney general who made it his mission in life to stalk, harass, and publicly attack a single college kid for the crime of openly having The Gay. The attacks included claims that the kid, Chris Armstrong, was a gay Nazi, gay racist, gay elitist, gay orgier, gay Satanist ... you get the picture. Shirvell did completely heterosexual things like host a blog dedicated to nothing but Chris-related news, follow and harass every single person on Chris's Facebook page, and show up at Chris's house to watch and videotape him from the bushes. We're sure it was all because he cared.

Further cementing his heterosexuality, Shirvell made references to his "GIRLFRIEND" in all-caps on his Twitter feed, which is something all straight people do, right? We're not saying his girlfriend also lives in Canada and it's just too bad you didn't catch her when she was in town last week, but we're alleging it very loudly.

Well, after getting the bejesus sued out of him, it seems that Shirvell's number came up, as his stalking target has finally been vindicated. The Michigan appeals court upheld an earlier ruling against Shirvell that basically said, "Yeah no, you cannot stalk kids even if they are gay. Pay up, fucker."

Shirvell had been insisting for years that his harassment against Chris was just a political campaign against Chris's radical homosexual agenda -- which consisted of co-ed housing and extended cafeteria hours -- and therefore the First Amendment protected him from being fired from the AG's office, to which the Michigan courts just had a great big chuckle.

There is good news for Shirvell though! The total debt he owes to Armstrong was dropped from $4.5 million to just $3.5 million (which is actually closer to the original amount for which Armstrong sued him). Unfortunately, the courts also ruled just last month that Shirvell did not qualify for unemployment from the state of Michigan, what with the state generally not giving money to stalkers in such an official capacity, so Michigan tax dollars will not go toward paying Shirvell's debts.

It is sad to see the last of Shirvell's illustrious career as one of your Wonkette's favorite openly closeted punching bags, but all good things must come to an end.

The good news for Andrew is that he can can always fall back on the residuals he no doubt earned from this homage to him in Glee: