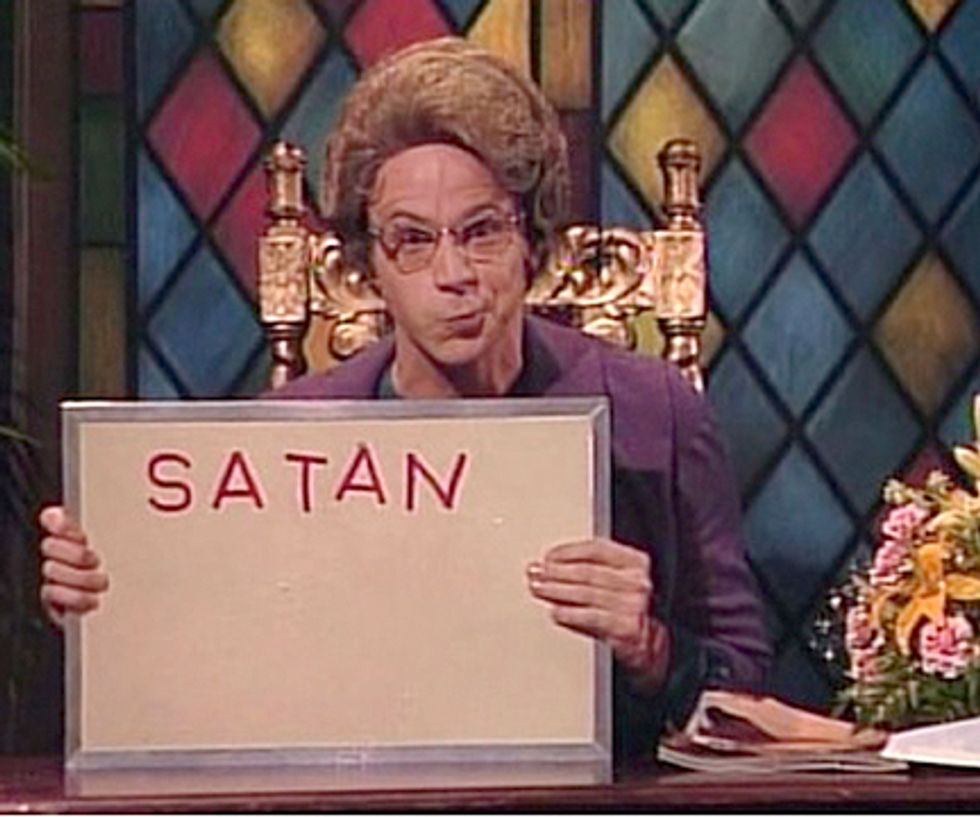 Your favorite megachurch megalomaniac is back, y'all! And this time he's tracked down the demonic powers who are keeping him from everlasting salvation and also too maybe a private luxury jet.

Teevee person Creflo Dollar was the pastor who solicited his parishioners in March for a $65 million flying Ferrari. But don't think for a second that Creflo wanted that space age private jet for personal gain! He just wanted to use the Gulfstream's minuscule carrying capacity to transport thousands of pounds of food to the starving non-Jesus peoples. His plan was to stack all the Ramen noodle boxes next to the built-in HD plasma screens and leather recliners, we bet.

After his  faith in Jesus made him a laughingstock, Dollar had a bit of a meltdown. Somebody in his church had the sense that it might be pretty bad publicity to so nakedly try to scam their flock of their money, so after taking down their private jet donation page, Dollar took a sabbatical and was out of the limelight for a good while. But oh boy did he come back with a vengeance! Apparently Dollar spent his time off having spake with THE LORD, or at the very least Peter Popoff's platinum membership version. After much spaking, Dollar realized the true reason he was attacked for the simple crime of wanting a personal airplane to carry all his Love of Jesus. Would you believe it was...SATAN?

In his newest sermon, Dollar makes the claim that the Forces of Evil (the cover band version of Axis of Evil) have set out to discredit him to stop him from teaching people about the love of the Savior. Sure, that's how Satan works. He'll give you enough millions to found a boatload of megachurches all over the world, a million dollar home in Atlanta, a $2.5 million home in Manhattan, a Rolls-Royce, and just enough money to buy one private jet back in 1999, but the minute you try to buy a new private jet just slightly out of your normal price range he's going to use all the powers of hell to smack you down. That fiend.

Lest you think to laugh at Dollar for letting his love of money get the better of him, just know that when you laugh, you're laughing at dreams, and you cannot stop the power of dreams. That lousy cricket told us so:

There, don't you feel bad about yourself? Some people dream of ending world hunger, or peace on earth for all men. Some dream of God giving them enough filthy lucre so they can show off their conspicuous consumption to all their millionaire friends, and all those dreams are exactly the same the end. What was that about camels and eyes of needles? Can't hear you, Devil lalalalala.

Dollar continued his sermon by noting that his dreams for THE LORD are so great, that if scientists discover life on Mars, he's going to need a billion dollar space shuttle so he can go preach the Gospel to the Martians. Ain't that a kick in the teeth? Scientists spend decades of research and billions of hard earned dollars trying to escape our atmosphere and finally make contact with intelligent life so that we can finally know we aren't alone in the universe, and some Bible pounder with a GoFundMe page will be right behind them waiting to smash the Love of Jesus into those aliens.

Our man of God even finds time to attack his critics while he's at it, noting that those vicious "news" types got his story all wrong, noting headlines like: "'Creflo Dollar askin' his members for 65 million dollars' - I ain't never ask you for a dime!" Which is true, except for all those dimes you asked them for. Specifically 650 million of them. But other than those, NO DIMES.

Also too, the good pastor insists that his ministry is so powerful and so filled with the Love of Christ® that his acquisition of a luxury airplane would have stopped Christian massacres in the Middle East:

Because that is absolutely how the relative of a recent murder victim would react. Fuck justice, just give this asshole some frittering money.

We look forward to hearing more of the Reverend Dollar's insights into the inner workings of Satan, the demon's devious plan to discredit the good pastor clearly afoot. Of course, said plan seems to consist entirely of letting the good pastor run his mouth openly and in public and just wait for him to crucify himself. Huh. Pretty sneaky, Satan.