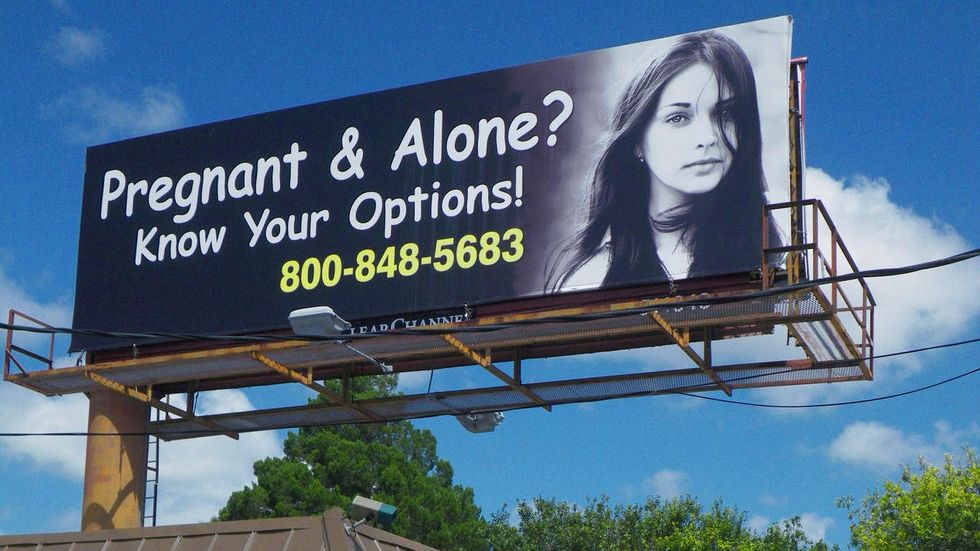 Crisis pregnancy centers are anti-choice institutions that often pretend to be abortion clinics or medical centers in hopes of luring in those seeking an abortion and being able to talk them out of getting one. You know, the ones with the "Pregnant and alone?" or "Pregnant and scared?" advertisement like on the picture above.

There are an estimated 2,500-4,000 of these centers across the country, many of which set up shop as close as possible to legitimate clinics, in order to increase the likelihood of being confused with one. They are often staffed by people wearing "medical garb" who can provide ultrasounds but have no actual medical licenses. Because they care.

The law in question requires these centers to be clear about the fact that they are not licensed medical centers, and to provide those who come in seeking treatment with comprehensive information on their options, including abortion. NIFLA claims this is a violation of their First Amendment rights, since their very purpose is to discourage abortion.

This is less of an abortion-related issue and more of a truth-in-advertising issue and a consumer rights issue. People ought to have the right to know what they're getting, and it should not be legal to "trick" them. Imagine if there were crisis dental centers operating all around town, not telling people that no dentists were actually employed there, and then when people showed up looking to get a cavity filled they were instead given a speech about how the government is using fluoride to taint our precious bodily fluids. Imagine if a bunch of Scientologists set up a fake psychology center in order to lure in people seeking psychological help in order to tell them that psychology is evil. (OK, they sort of did, but they call it a "museum.")

People would be pretty mad about that, and it would be perfectly reasonable to tell those centers to stop doing it -- or at the very least tell people that no actual dentists or psychologists work at those places. Similarly, a restaurant shouldn't be able to put up a sign saying "Free ice cream!" and then only give away broccoli.

Additionally -- if they are claiming that they exist to tell pregnant people what options they have, they should actually have to tell them what all of their options are. This would not be an issue in the first place if they were not trying to trick anyone, if their advertising simply said "Want to be talked out of having an abortion? Come here and let some randos with no actual medical background do that!" But that is not what they do. Their purpose is to mislead and confuse. They function as an elaborate scheme to hoodwink women seeking a legal medical procedure. The purpose of these laws is to diminish their ability to do that.

There's another issue with these CPCs that often gets ignored, and that is that these centers also screw those who don't even want to have an abortion in the first place. Conservatives may feel comfortable with these centers screwing with the evil abortion-havers, and may even find their antics delightful. But what about the woman who actually wants to have a baby and took half a day off of work to go to a place she thought was an actual medical center only to find that there are no actual medical professionals working there? That is also shitty! That woman won't be getting a prescription for prenatal vitamins or any other medical care, and that's a scam.

Ironically, if NIFLA gets the ruling it wants in this case, it could have an impact on laws they actually like -- like the laws in other states requiring doctors to tell patients seeking abortion a bunch of anti-choice lies about fetal development stages or abortion causing cancer, or laws in states like Texas, Louisiana and Wisconsin that require doctors to show those patients a sonogram of the fetus or describe it to them if they refuse to look. If "compelled speech" violates the first amendment rights of CPCs, it also violates the rights of doctors.

That would be great for pro-choicers who oppose those laws, but the underlying concern in both of these issues should not even be abortion, but whether or not it is lawful to willfully mislead or manipulate people in these ways. It shouldn't be. Not for states and not for CPCs. A scam is a scam and fraud is fraud, and if it is illegal to pretend to be a Nigerian prince in order to get people to send you money, it ought to be illegal to pretend to be a medical center in order to talk people out of having abortions.