Crisis Pregnancy Centers: 'You May Not Need An Abortion' Because Maybe God Will Murder Your Baby! 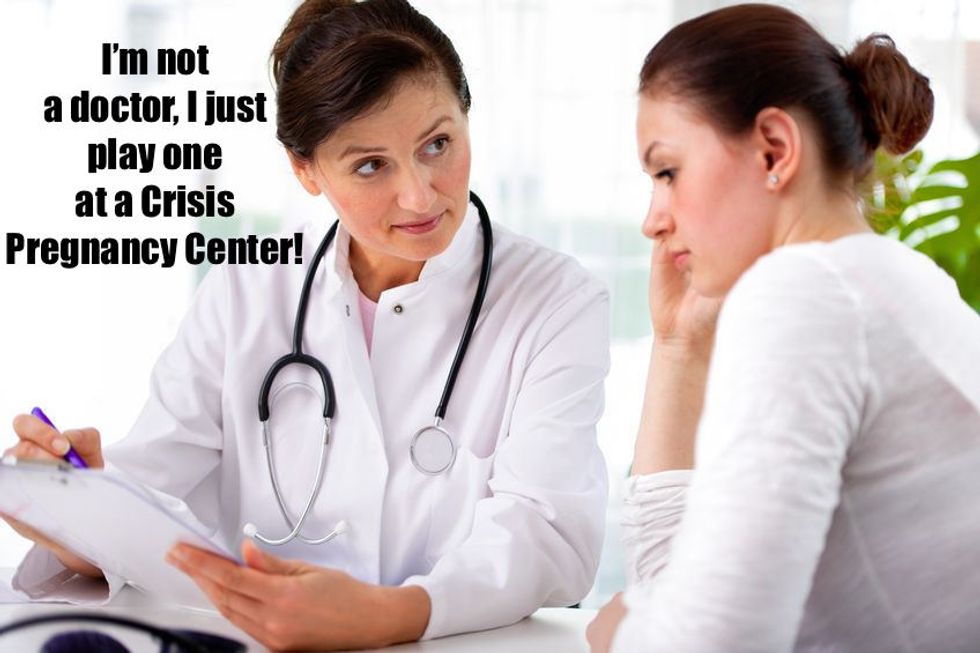 Crisis pregnancy centers (CPCs) -- clinics that exist for the sole purpose of discouraging women from having abortions -- have been known to engage in some fairly shady practices. From masquerading as full-service health clinics without having an actual doctor on staff, to pretending to offer abortion services, to lying to their "patients" about abortion resulting in breast cancer and mental health issues they made up themselves, like "Post-Abortion Syndrome" and what have you.

Hawaii Crisis Pregnancy Center Will Jam An Ultrasound Wand In Your Vagina FOR JESUS!

Nurse Rebecca will get that 'baby photo,' even if she has to jam that probe up to your eyeballs! That's dedication!

Given all of this, you may feel a tad skeptical when I tell you that I have found the worst CPC ever. Oh, but I have. In fact, it's so bad that I would actually guess that even some of the most virulently anti-choice people would say it was a bridge too far.

It's called "My Choice Chicago," and it's part of a network of CPCs called "Enlightened Woman Centers." Rather than presenting themselves as a fake abortion clinic or as a pregnancy "resource" center, they've somehow come up with an even more appalling way of discouraging abortion.

Their gimmick? "You may not need an abortion."

Why, you ask? Is it adoption? Are they gonna say adoption?

NOPE. According to their site, you may not need an abortion, because maybe you will just have a miscarriage anyway!

Right now, you probably wish you could escape. You might feel scared, worried and needing to think. Know this -- you are not alone. We are here to help you.

You may feel that abortion is the best choice for you. But before you commit, take some time to understand why you may not need an abortion! About 1 in every 4 pregnancies will end naturally. Yes, NATURALLY without any intervention, surgery or chemicals! Wouldn't you feel relieved if your pregnancy ended naturally by miscarriage? If you miscarry, you will not need to go through the pain, suffering and risk of an abortion procedure!

Yes, you read that right. You may not need an abortion because maybe you will just have a miscarriage.

IT'S TERRIBLE ON EVERY POSSIBLE LEVEL!

It's somehow both demeaning to both those seeking abortion and those who have had a miscarriage -- most of whom would not exactly describe that as an experience without pain, suffering or risk. Miscarriages come with cramping and bleeding, for one. For another, there is also the possibility of an incomplete miscarriage, which often needs to be treated with a D&C anyway.

This tactic is inches away from "You may not need an abortion. Have you SEEN the infant mortality rate in the United States? Babies die all the time here! No abortion necessary!" levels of pure callousness.

The clinic actually offers "on-site testing" (i.e., an ultrasound) to determine whether you could be one of the lucky 1-in-4 that does not "need" an abortion and is just going to miscarry anyway. Fun!

If the pregnancy test is positive, you'll be scheduled for an ultrasound examination to determine fetal viability. Usually, the ultrasound can be performed during the same initial visit. Based on the results of this ultrasound exam, medical personnel will be able to tell you whether they are seeing what's expected. One in 4 pregnancies ends naturally in a miscarriage, because the pregnancy is not viable. So it’s important that you confirm the presence of a live fetus before you make a decision. Miscarriage is your body’s natural way of ending a pregnancy. In this case, you wouldn’t need the pain, cost and risk of abortion.

On their FAQ, perhaps unsurprisingly, they disseminate the usual anti-choice propaganda about breast cancer risk and "Post Abortion Syndrome," but follow it up with why a "natural" miscarriage may be the best choice for you.

5. What are my risks associated with abortion?

Abortion is a medical procedure (resulting in death of the fetus). With any surgical or chemical abortion, there are associated physical and mental risks. Studies suggest an increased risk of breast cancer later in life. Other studies suggest that women getting an abortion, especially those with reservations, often suffer from Post Abortion Syndrome (or PAS). Even if you're already committed to having an abortion, don't rush in as you may not need it! About 25% of all pregnancies end naturally. Why go through the pain and cost of an abortion if it's not necessary? Call or stop by your local participating center and let us help you make an enlightened choice.

Also on their FAQ page, they seem to repeat a line about "no further obligation."

A good way to check for a viable pregnancy is by ultrasound technology. We recommend you get your ultrasound at a medical facility that will (a) not charge you for the ultrasound, and (b) not put you under any obligation.

All Enlightened Woman participating clinics have agreed to offer ultrasound exams free of charge with no further obligation whatsoever.

Do they think that if you get an ultrasound at Planned Parenthood that you are then obligated to get an abortion? Because I am quite sure that is not a thing.

Now, certainly, it seems rather suspicious that an anti-choice CPC would be so "whatever" about miscarriages -- as if the thing they were most concerned about was the actual abortion procedure rather than the ending of a pregnancy. That really doesn't make a whole lot of sense. (And in fact, some people who noticed that one in four pregnancies end in miscarriage ended up being totally pro-choice once they made that connection between all the little babies being murdered in the womb, AND GOD.)

It's far more likely the actual game here is getting people into the clinic in order to have an ultrasound, in the hopes that seeing the ultrasound will discourage them from having the abortion. This is why many states now require transvaginal ultrasounds prior to getting an abortion. It also, unfortunately, seems pretty likely that they may tell their "patients" that they are likely to suffer a miscarriage when in fact they are not, in hopes of keeping them from having an abortion.

As I mentioned earlier, this is not the only one of these clinics. In fact, a Google search for "You may not need an abortion" turns up nearly 48,000 results, the first few pages all being CPCs like this one, many of them with extremely misleading pro-choicey sounding names like "Informed Choices Clinic" and "RealChoice4Me.com." Several of them have even tailored the way they appear in Google search to make them look like real abortion clinics.

And yes, they all tell prospective patients that they may not need an abortion because maybe that fetus will just kick it on its own so why bother? Probably because they just really, really love life so much.