Cure Your Crotch Weasels The Christian Way: Put A Ring On It! 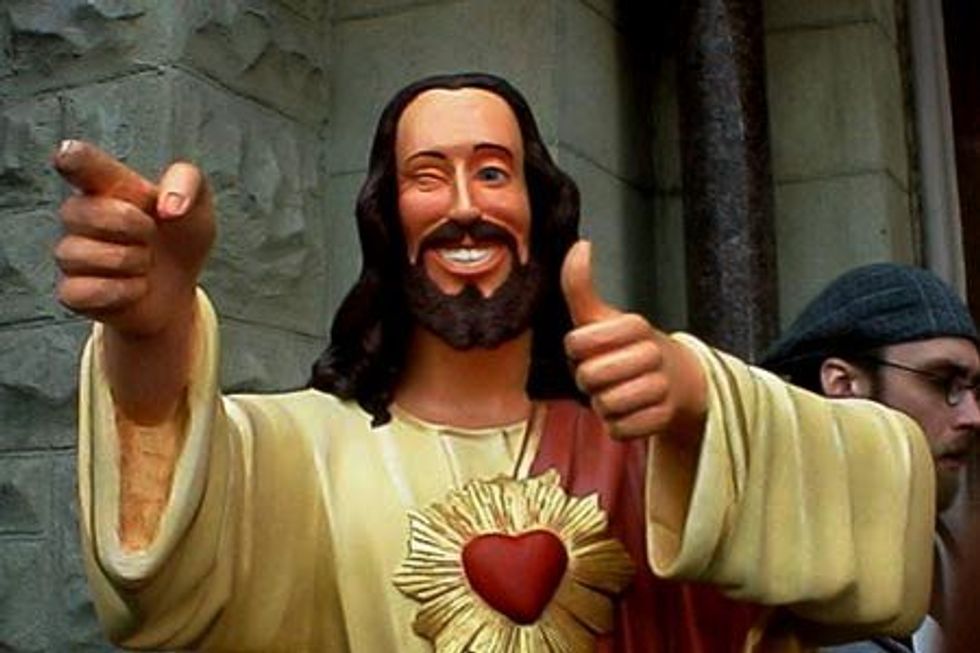 Check THIS out, kids!

There comes a time in every Christian youngster's life when he or she has a burning case of the crotch weasels and doesn't know what to do. Go to the doctor? Meh, that's for liberals. Go to church? Now you're talking. Go to church for the specific purpose of heterosexually marrying another Christian crotch weasel-haver? DING DING DING!

That's one of the lessons allegedly given to 8th graders at Wooster High School, a PUBLIC school in Ohio, by the Pregnancy Care Center. As the name suggests, it's one of those "crisis pregnancy centers" that offers Christian alternatives to abortion but no actual medical care, because it's staffed with schoolmarm-y Christian housewives instead of actual medical professionals.

Check out all the wonderful knowledge the agenda-driven hacks from Pregnancy Care Center told the children:

According to what American Atheists has been told, the pregnancy center representative made several

statements that confused the student, so the student shared them with their parent. The statements

made by the representative that confused the student were as follows:

1. If a girl gets pregnant because of rape or incest, her only option is adoption of the baby.

3. Students shouldn’t have children until they are married.

That is just some terrific science right there, and definitely not at all influenced by incorrect rightwing beliefs.

For the record, abortion is also a legal option in the United States. It doesn't matter that twice-baked religious fundamentalist dingleshits don't like it, and it doesn't matter if Mike Huckabee sincerely believes it's a damn shame for an 11-year-old to have to carry her rapist's baby, but that's the breaks, shit happens, praise Jesus. HuffPo also points out that in Ohio, "medical personnel are required to tell sexual assault victims about emergency contraception." But the douche-twizzlers at Pregnancy Care Center aren't real medical professionals, so guess it's OK for them to lie to the kids.

Or how sometimes Newt Gingrich is boning another lady while his wife is busy in the hospital having cancer.

Or how former Sen. Larry Craig is sometimes tapping his toes with his wide stance (FOR GAY SEX BONER REASONS) while his wife is, we dunno, in Idaho we guess.

Or how current Sen. David Vitter is sometimes wearing diapers and sexing prostitutes, and then allegedly getting them pregnant and asking them to have abortions -- because, again, they are legal! -- while his wife is oh God, the poor thing.

We could go on. Good Christian opposite-marrieds, all of them!

HuffPo notes that if you visit the Pregnancy Care Center's website, you can find bragging about how "the PCC has taken the abstinence message into Wayne and Holmes County schools for decades." It's not like they're trying to pull the wool over anybody's eyes about what they're doing. They're just pulling the wool over the children's eyes, no big.

According to the parent who complained, Wooster High School administration seems to be A-OK with this religious sex ed. One associate principal, Andrew Bratcher, said there was no need to inform the parents about this religious indoctrination, because the PCC comes to lie to the kids every year. Another associate principal, Nolan Wickard, said there's definitely no need to have any real medical professionals come tell the kids the REAL ways to safeguard their sex bits. Know what doesn't work? Abstinence-only sex education provided by wingnuts! Know what DOES work? Comprehensive sex ed that teaches kids how to actually protect themselves!

And LOL, American Atheists reports that Ohio ranks 23rd in the nation for teen pregnancy and oh look, here are the reproductive experts at the Guttmacher Institute, with some more bad news:

It is not clear what other sexual health information, if any, the students received in the class. In Ohio, "venereal disease" curriculums are up to local boards of education. The information provided is also not required to be medically accurate, according to the Guttmacher Institute.

So guess these assholes are just dead set on their students being full of babies and STDS, for Jesus.

Maybe Bristol Palin can loan them some maternity clothes next time her sexually abstinent ass finds itself surprisingly Not Pregnant.