Dad And Son Accused Of Raping Teen Girl Will Base Defense On Bible, As One Does 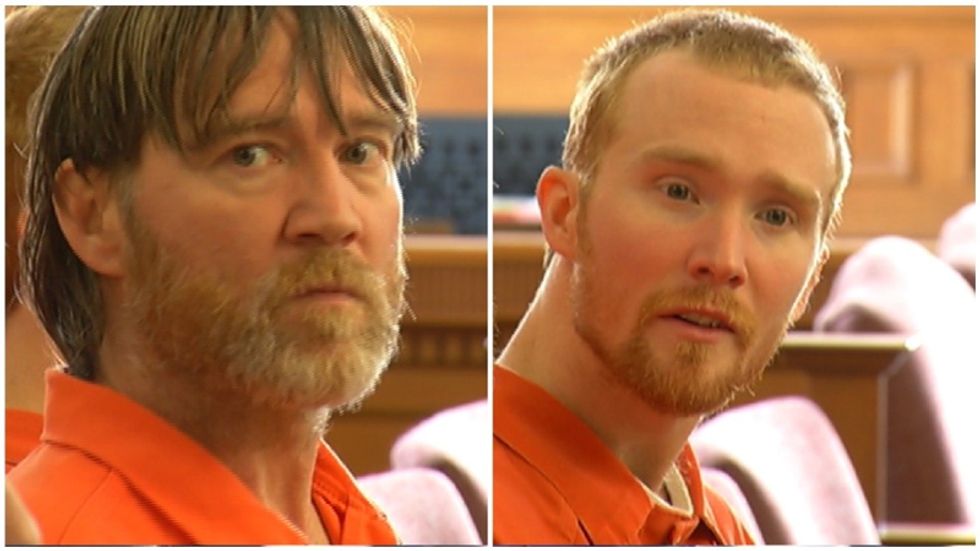 Trigger warning for ALL OF THIS:

A Toledo man and his son, who are accused of imprisoning a girl in their basement and raping her over a three-year period, have told the court that the only law they recognize is that contained in the Holy Bible. Timothy Ciboro and his son Esten Ciboro have been given permission to represent themselves (with court-appointed lawyers standing by in case they're needed), and plan to defend themselves using what the younger Ciboro told Judge Linda Jennings during a hearing Friday is “the only law book that truly matters.” Timothy Ciboro said they plan to “use God’s holy word to ask questions, questions that we believe are absolutely vital to our case,” which is certainly a novel strategy in this century. We're going to assume they haven't really read the thing too well, unless of course they intend to demand being immediately stoned to death or something along those lines.

Then again, hard to say, since Esten also told Judge Jennings, "There’s a great deal of strategy in Scripture and I use those strategies in everything I do[.]" We know there is some rapey stuff in the Bible, but are fairly certain there's nothing in there about the need to imprison preteen girls for three years and rape them repeatedly until they manage to escape when you and your dad are out of the house. Then again, people read all sorts of things into the Bible, so you never can tell what they might come up with. Judge Jennings has allowed the men to have a Bible available to them, but said they can't use it to question witnesses during the trial, advising them, "It’s the court’s opinion that while the Bible is very important, it is not a law book in a court of law," which sounds like a pretty solid legal opinion, or possibly an impeachable offense, one or the other.

The Ciboros were arrested in May 2016 when the girl, then 13, escaped the basement where she'd been held for over a year -- another practice we don't recall being advocated by most editions of the Good Book. She told police she was fed only spoiled leftovers and was forced to use a bucket as a toilet.

The Ciboros appear to think they are in better shape using the Bible their own selves for their defense than relying on attorneys; in a November hearing, Esten Ciboro explained his reasoning using a cliche that's much beloved of homeschooling parents and other Christianists: "Professionals built the Titanic. Amateurs built the ark." Which perhaps would be a more compelling argument were the story of Noah's Ark not a physical impossibility, let alone a legal strategy. Ultimately, their use of the Bible is likely to be about as successful as any other case where defendants represent themselves, so we can't say they're really putting themselves at that much more of a disadvantage.

The Washington Post notes that religious-based defenses have been used, without success, in some other recent criminal cases, like an Indiana woman who argued that state's Religious Freedom Restoration Act, signed into law by Mike Pence in 2015, gave her the right to beat her son with a wire hanger, since the Bible is a greater authority than Joan Crawford. The judge didn't buy it, and the woman pleaded guilty. In another Indiana case, a man argued that his religious beliefs relieved him of an obligation to pay over $1,000 in state income taxes, although WaPo points out his case was weakened by his refusal to specify what those beliefs were, or how they overruled tax law.

In a perfectly accurate but nonetheless brilliantly deadpan bit of copy, the Post observes, "It’s unclear how Timothy and Esten Ciboro plan to use the Bible to aid their defense, or what part of it they plan to cite."

Oregon wildlife refuge occupier Ryan Bundy filed a bunch of nonsense legal paperwork declaring himself a 'sovereign citizen' who is not subject to the law. Oddly enough , he remains in jail.

We'll confess we can hardly wait to find that out ourselves. So far, there's no indication they intend to borrow Ryan Bundy's argument that, as citizens of Heaven, they aren't bound by the mere laws of the United States and Ohio.

In other news, people across America continue to fret about Sharia law.