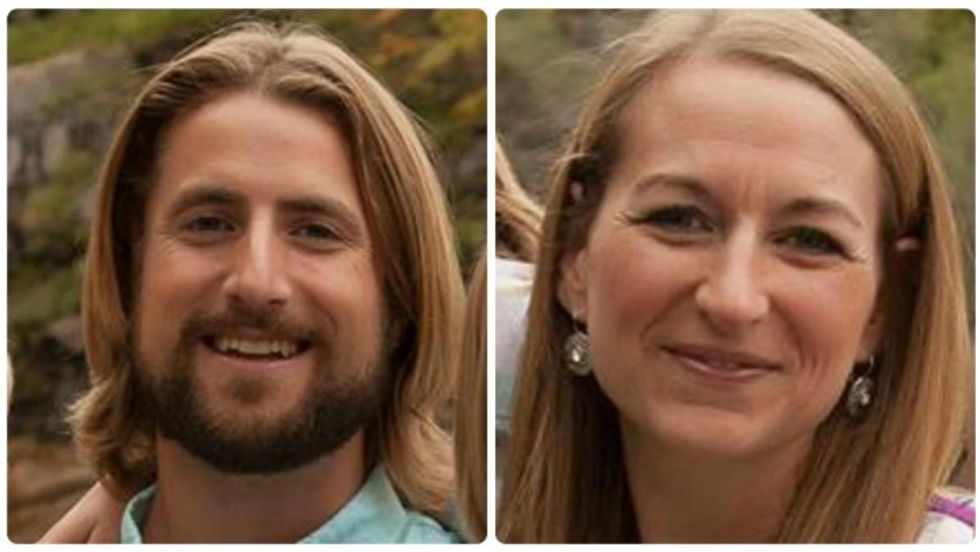 Hey! Remember Collet and David Stephan, those terrible Canadian parents who refused to take their 19-month-old son to the hospital, on account of the fact that they were pretty sure they could cure his meningitis themselves with "natural remedies" of maple syrup, apple cider vinegar, garlic, hot peppers and assorted pocket lint or whatever? And how their son died because literally none of those things can cure meningitis? And they got convicted of "failing to provide the necessities of life" and the Dad had to go to jail and the mom got put on home arrest?

WHELL! They are back! Well, the dad is anyway. David Stephan is fresh out of jail and he wants to sell YOU some natural remedies with which to murder your own toddler! Ha! No. Just kidding. He is, however, making appearances at Canadian health food store Ave Maria, promoting EMPowerPlus, a nutritional supplement developed by his father's company, TrueHope Nutritional support.

The guy who runs Ave Maria notes that while there has been some controversy on social media, he brought Stephan back to the store because his customers asked him to, because they just love him so much!

“We’ve had David in a number of times before – he’s very knowledgeable – and we had requests from our customers to bring David back. Although we had concerns in light of the case last summer that there might be issues, at some point we have to accept the fact that people have made mistakes.”

Stephan’s appearance has attracted a lot of social media attention – not all of it positive but Fuller isn’t fazed.

“Our store has products for people’s body, mind and soul. We want people to get results. This product gets results for people, David Stephan is a representative of that company and we hope that he continues to help people improve their health and offers an alternative to pharmaceutical medication that doesn’t always work.”

And what is this product, you ask? Why it is magic beans to cure your bipolar disorder, your autism, your depression, your Groat's Disease, your anxiety, fatigue and your ADHD! Not to mention your schizophrenia! Because those are, of course, all very similar problems that can easily be cured with the same nutritional supplement! A nutritional supplement that is not actually all that different from a regular old multivitamin!

EMPowerplus has been extremely controversial in Canada -- so much so that Health Canada has issued warnings about it, and the Canadian government once tried to sue the company in order to get them to stop selling the supplements. And for good reason, because it is a big ol' pile of woo.

Even the genesis story of the product is totally bonkers:

The story involves a conversation between two Canadian Mormons, Anthony Stephan and David Hardy. The story goes something like this. Mr Stephen, a property manager was complaining to his fellow church goer Mr Hardy about his children’s behavior. Namely some symptoms of ADD and some manic components of bipolar. Mr Hardy, whose experience as a cattle feed salesman informed him, stated that some of these behaviors sounded similar to a condition that occurs to domestic pig farms, Ear and Tail Biting Syndrome.

Mr Hardy offered up that information that introducing vitamins and minerals into pig food seemed to clear up ETBS. Some theorycrafting between the two of these men soon resulted with the conclusion that by introducing vitamins and minerals to Mr Stephen’s children that the human version of Ear and Tail Biting Syndrome might just clear up and what did he have to lose but to try?

According to an article in Discover Magazine, Anthony Stephan's son Joseph was bipolar and prone to bouts of explosive anger, and his daughter Autumn was in a psychiatric clinic on account of the fact that she was "psychotic, convinced she had a gaping hole in her chest from which demons emerged." And within 30 days of taking the vitamin mixture, they were both CURED! And the demon hole was gone! And they never needed their "real" medications again!

Well doesn't that just read like the clickiest click bait headline you ever did see? "Mormon Farmer Shares The One Weird Trick For Shrinking The Demon Hole In Your Chest That Your Therapist DOESN'T Want You To Know!"

Of course... the company says the magic beans will only work on you if you don't have "candida." Not like, a yeast infection candida, but this other "woo" version of candida that snake-oil salesmen say is the cause of a host of health problems, like sleepiness, sleeplessness, weight gain and cancer. When you purchase EMPower, you receive a "candida self test" to find out if you have a "candida problem" -- because if you do, it won't work for you, because you won't be able to properly absorb the nutrients. Conveniently, TrueHope has yet another product to sell you that will take care of that issue!

So, just to recap -- a guy who went to jail because he thought he could cure his son's meningitis with shit from his spice cabinet is now going around telling people, some of whom have serious psychiatric conditions, to get off their meds and replace them with some Vitamin B and Riboflavin or whatever. And people are like "Oh, for sure, this is a guy we trust with our health concerns! Bring him back!" and the health food store idiot thinks it's a great idea and does so. Marvelous!