Dadgummit, Did Jeff Sessions Fuck Himself With The Perjury Stick Again? 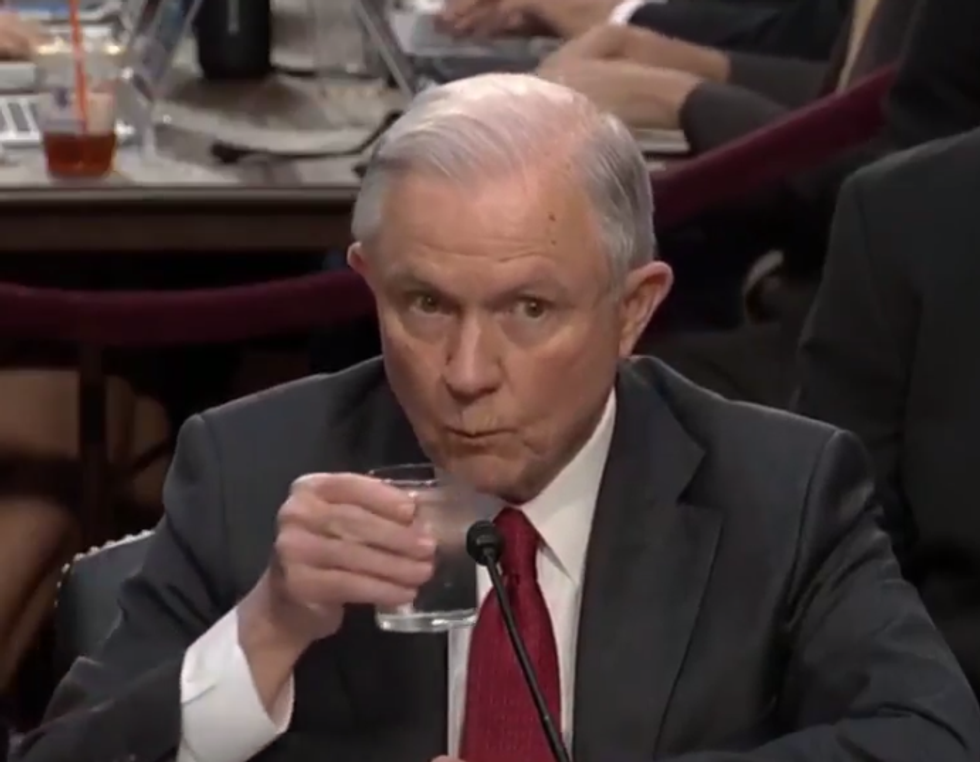 Bless! Poor Attorney General Jeff Sessions and his confused brain can't seem to catch a break! Back during his confirmation hearing, that fast-talking city boy Senator Al Franken asked him a very hard question about what he would do if he found out Trump people had done illegal nookie with Russians during the campaign. In response, he asserted that he did declare he "did not have communications with the Russians." Then we found out, UH OH, Jeff Sessions hot tubbed with the Russian ambassador several times, so he changed his (under oath) testimony in June to say he didn't meet with the Russians to talk about "a political campaign":

"At a June Senate intelligence committee hearing, Sessions testified that he wasn't aware of any conversations between "anyone connected to the Trump campaign" and Russians about "any type of interference with any campaign or election in the United States."

In another exchange with Democratic Sen. Joe Manchin of West Virginia, Sessions was asked if Page met with Russian officials "at any point during the campaign."

Most recently Sessions changed his story even more to tell Franken he didn't discuss Russian "interference" with the campaign. What's the truth? Jeff Sessions does not know!

But oh boy, he's in the hot seat again and a bunch of mean Democrats want him to answer questions again! You see, now that Trump campaign "coffee boy"/Russia liaison George Papadopoulos has pleaded guilty in the Mueller investigation, we have learned that G-Pap (tired of typing his name, it is hard) definitely brought up the idea of arranging a meeting between Donald Trump and Vladimir Putin in Sessions's presence. You know, at this meeting in March of 2016:

As of Thursday, this was how far the Sessions story had evolved:

Would you be surprised to learn that Sessions has moved the goalposts AGAIN? After that tweet, NBC's Ken Dilanian updated with a story that said ACTUALLY according to his source, Sessions doesn't remember whether he said it would be a bad idea to set up a covert meeting between Trump and Putin, but he DEFINITELY DID SAY THAT! He just forgot because "this Padadopoulos person did not leave a lasting impression." Jeff Sessions can go home and have his afternoon nap now?

But then the New York Times followed up with its own reporting, and got Trump campaign idiot J.D. Gordon on the record about what really happened when Pap suggested a secret sexxx meeting between Trump and Putin. "He went into the pitch right away," Gordon said of Papadopoulos! And what happened then, Mr. Gordon?

Mr. Trump listened with interest. Mr. Sessions vehemently opposed the idea, Mr. Gordon recalled. "And he said that no one should talk about it," because Mr. Sessions thought it was a bad idea that he did not want associated with the campaign, he said.

As NYT reports, current White House staffers Hope Hicks and Stephen Miller were in that meeting too. Hicks is meeting with Robert Mueller after she gets back from tending to President Grunt Sack on his Asia trip. We bet that's one of the many things Mueller will want to discuss with her.

Meanwhile, Jeff Sessions cannot recall whether he recalls the Russian thing about the thing about which he cannot recall. Guess he'd better go see Al Franken and lie about it some more! (Franken, to that effect, has fired off another letter to Sessions like "LOOK ASSHOLE.")

And does Donald Trump, whose memory is sharp like large sexually aroused elephant, remember? Nah.

MEANWHILE! Dumbest fucking Trump-Russia spy in the known universe Carter Page spent his day with the House Intelligence Committee on Thursday, without a lawyer of course. He LOVES not having a lawyer, because it is the funnest! A stinky lawyer might be like "Little buddy, your diatribes about how the Russia investigation was invented by Hillary Clinton so she can hate crime you for being Catholic are a LITTLE weird." That would just suck.

After the VERY LONG hearing (at which Page apparently drove the Democrats crazy and also pleaded the Fifth on documents, which is not something you really can do when you're already testifying for SEVEN HOURS), Page spoke to reporters and revealed that yeah, he told Sessions about his own trip to Russia in July of 2016. But he says it was just a big nothing, just like the "dodgy dossier" that Hillary spent her uranium moneys to buy in order to libel him, is a big nothing. How could Jeff Sessions possibly be expected to remember that yet another Trump person told him he was doing weird things with Russia?

Look, maybe Jeff Sessions for real does not remember any of this stuff. In that case, he is clearly too addled in the brain to be the nation's top lawyer and should probably go live on a farm where the pork rinds are allowed to run free range, or whatever Alabama retirement homes are like.

The other possibility is that he does remember, and he's been trying to cover it up the entire time, with perjury. If that's the case, we reckon it's time to LOCK HER UP LIKE A COMMON HILLARY.