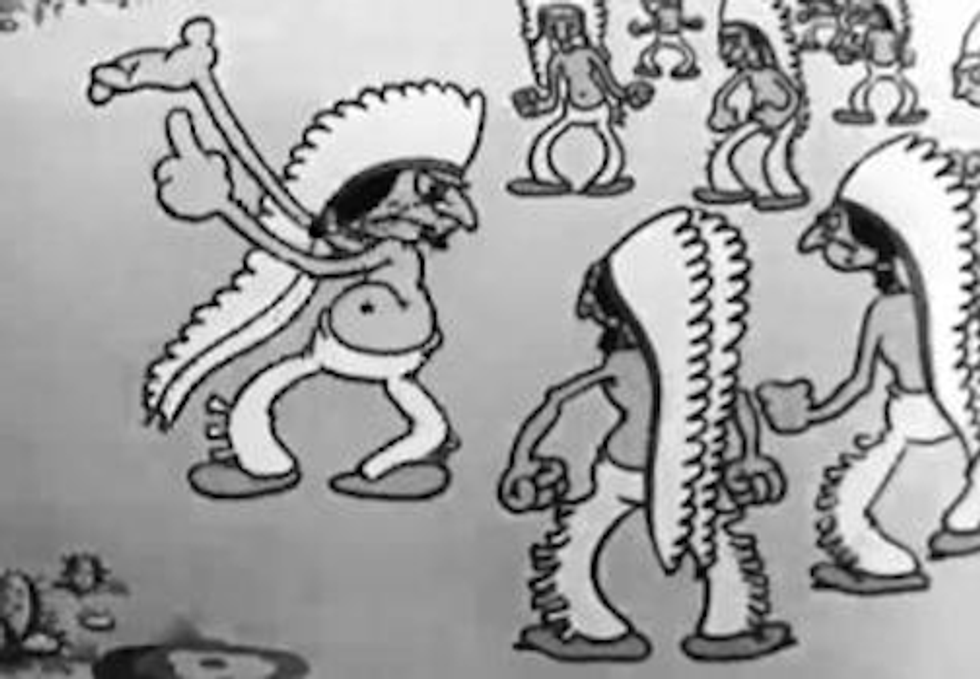 Wow, today must beDaily Caller Debunks Everything Badly Day! Not only has Tucker Carlson's Home For Angry White Men exposed Cory Booker as a carpetbagging friend of predatory raccoons, it has also completely blown the credibility of "The American Indian leader spearheading the campaign to change the name of the Washington Redskins" (see what they did there?) by revealing that Ray Halbritter, who has made numerous media appearances to call for the name change, is "not a legitimate member of the tribe he leads," but rather "an Obama crony who is raking in casino money and paying back only small stipends to his tribe members." We're still trying to puzzle out how those two categories are mutually exclusive, and why the uber-capitalists at Daily Caller suddenly don't like an exploitative jerb creator, but we mostly just wanted to call attention to the hilarious heading that the DC used to promote this story in their morning email: "RED-Handed! Documents: Anti-Redskins Indian leader not a legitimate member of his tribe." Excellent work, Daily Caller -- glad to see you won't stand for these fake Injuns and their outrageous race-bating.

Thanks to the diligent work of New York State Assemblywoman Claudia Tenney, we now know that the term "Redskins" cannot possibly be offensive, because one guy who's been complaining about it is not really Indian enough for a New York state legislator, so shut up already. While Halbritter has been "Nation Representative of the Oneida Indian Nation since 1975," which sounds kind of official to us -- the Oneida Nation website seems to think he's legit -- Claudia Tenney is pretty darn sure “He is not even technically an Oneida. There is not a drop of Oneida in him[.]”

“He has no ancestry in the Six Nations but he has a lot of powerful friends in D.C.,” Tenney said.

Well! That sure is damning!

It turns out that Tenney's claim hinges on whether Halbritter's great-great grandmother was properly registered as an Oneida member. That's all part of the seriously complicated and contentious history of tribal identity and enrollment, which can get super-thorny and political. We won't delve into the complicated history of tribal registration and "blood quantums" that Tenney and the Daily Caller detail -- frankly, it looks like they've done their homework and maybe Halbritter's tribal paperwork might be debatable.

But even if there is an issue involving Halbritter's enrollment status, isn't that mostly something that would affect only his place in tribal governance? We're kind of wondering how that makes the name of the DC sportsball team any less racist. Does that mean that now they can put an asterisk after their team logo, with a disclaimer reading "Now officially non-racist because this one guy's great-great grandmother was removed from Oneida tribal rolls."

Congratulations, Daily Caller. We guess you proved conclusively that the term "Redskins" is not a problem for white people.