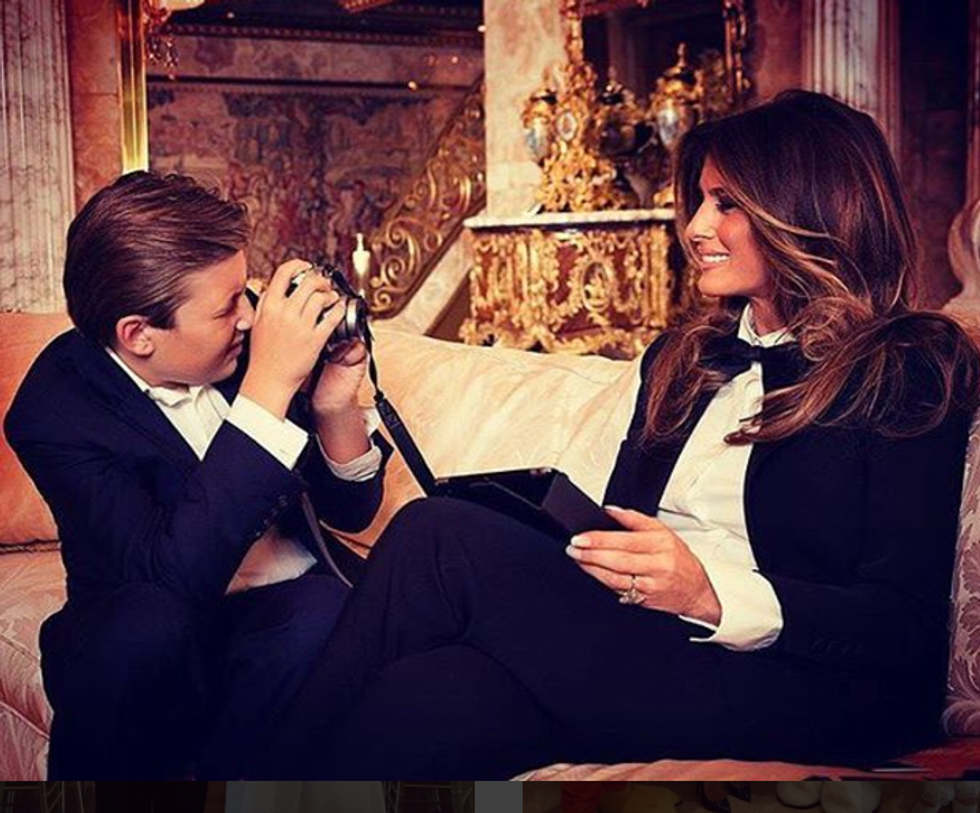 Wonkette Fashion Day continues! Earlier we had Trump Treasury Secretary Steven Mnuchin's wife Louise Linton catching hell for Marie Antoinette-ing all over America on the taxpayer dime, hashtagging her Valentino and whatnot. Now we turn to noted fashion rag The Daily Caller, founded by obvious Anna Wintour protégé Tucker Carlson, for it has thoughts about how Barron Trump, the young son of Donald and Melania Trump, needs to stop wearing shorts and t-shirts like a common 11-year-old, and always appear in public wearing a tuxedo, we guess. Wonkette's thesis is oh fuck off, Daily Caller, Barron can wear what he wants.

The writer's name is Ford Springer, and judging from his Twitter, he is one of those overgrown University of Alabama dickweasel grads who probably screams "ROLL TIIIIIDE!" constantly, even though it's a known fact that Alabama sucks. His fraternity likely required him to wear a suit sometimes, so why does Barron get to dress like a kid? Unfair! Ford Springer is feeling oppressed!

Barron was returning to the White House from New Jersey on Sunday and while the president and first lady traveled in their Sunday best, young Barron looked like he was hopping on Air Force One for a trip to the movie theater.

Here is what old Ford is going full Melissa Rivers about:

He looks like ... a little kid? He's wearing a t-shirt that's tucked in and nice khaki shorts. Is Barron Trump supposed to be dressed like it's Easter fucking Sunday? We bet Ford Springer got a serious case of the vapors when he gazed upon young Barron in improper eclipse-viewing attire Monday!

First of all, here at Wonkette, we believe firmly that you shouldn't go after the kids. We didn't like it when they (and by "they" we mean The Daily Caller) went after the Obama kids, and we didn't like it when folks went after Jenna and Barbara Bush. We are bi-partisan like that! (It is, of course, perfectly acceptable to go after the grown Trump children, as long as you focus on Don Jr., Eric, and Ivanka, who are all cordially invited to go fuck themselves. We are also already on the record about Ivanka being bad at fashion.)

But we also have a bone to pick with our new pal Ford Springer's logic in criticizing Barron Trump's totally normal clothes:

Donald Trump and Melania always depart the White House looking their best. The president wore a fine tailored suit and Melania wore an elegant dress just as jaw-dropping as the last. [...]

His dad is always looking dapper and his mom has become a worldwide fashion icon since becoming first lady.

FACTCHECK: Everything about this is horseshit. Donald Trump never, NOT EVER, looks "dapper." His suits are not "fine tailored," they are very poorly tailored, if they're not directly off the rack. They're several sizes too big, and the ass region looks like it's roomy enough for a colostomy bag. The motherfucker TAPES HIS TIES, which are far too long 100% of the time.

Know who actually looks "dapper" in those pictures? Barron Trump, who is wearing age-appropriate kid clothes that are nice!

Melania rocks some great dresses, to be sure, but in order for an American first lady to be considered a "worldwide fashion icon," it's helpful when the entire world doesn't despise her husband. Michelle Obama was a "worldwide fashion icon." We imagine that "worldwide" sees Melania Trump and thinks, "That's a snazzy dress. Too bad it's standing next to that towering pile of orange shit."

The point is that Ford Springer has written a bad fashion article and will never get hired at Vogue at this point, probably. Moreover, he needs to fuck off about Barron Trump, A CHILD, who also happens to be the only person in that entire White House who isn't completely detestable.