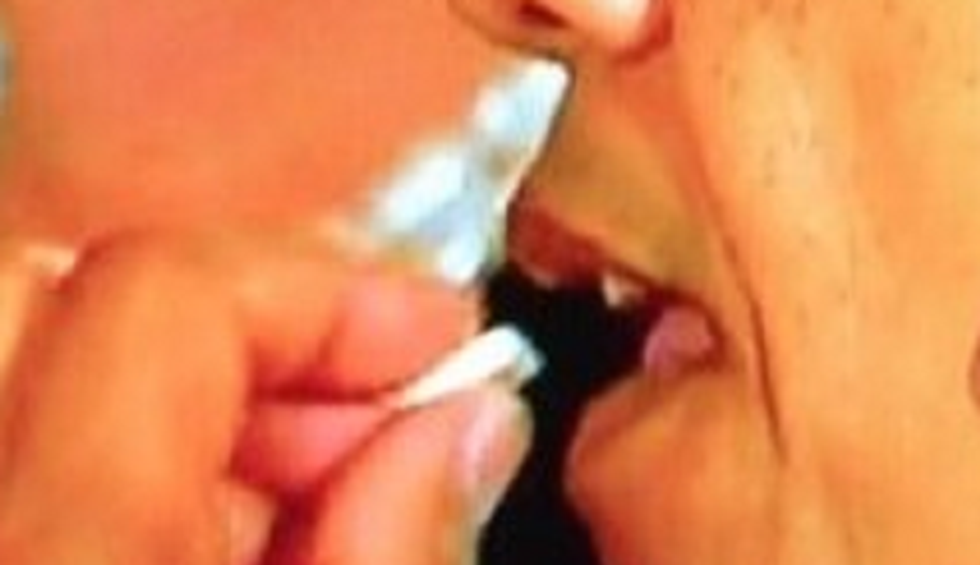 It was a literary experiment to rival theavant garde poetry of Chuck Grassley or the postmodern koans of Donald Rumsfeld. Inspired by the briefest snippet of video from Fox, showing the tyrant popping a piece of nicotine gum into his mouth to stave off the cravings, the cravings not just for cigarettes, but for absolute power and the blood of white children. And the vehicle to show this man for what he truly is? A 326-word description of the act, carefully crafted to let the tyrant know -- but more importantly, to let THE PEOPLE know -- that while he may think he got away with it, he was seen. And in the seeing, all pretense was stripped away. All the deceit laid bare. Here, America, proclaims the Daily Caller's Vince Coglianese, behold! I bring you the sickening spectacle, the beautiful hypocrisy of Obama Chewing Gum.

Ever-conscious of the many cameras that capture his every move, Obama waited for just the right moment -- during an event honoring former President George H.W. Bush -- when it seemed likely that no network in the world would be focusing on the current president.

Fortunately, the eagle-eyed producers at the Fox News Channel transitioned to a presidential split-screen at that very moment.

In a mere instant, the president exhibited the requisite sleight of hand of a world class Nicorette consumer.

The president apparently never looked down while his hand shed the single unit of gum from its tinfoil and plastic casing and approached his mouth as if to touch his face in thoughtful contemplation.

The square piece of sweet release with its comfortably rounded corners earned a mere split second of Fox News’s valuable screen time, peeking out from Obama’s three-fingered clutch before being pushed off to its pliable end.

But the magic didn’t stop there.

Obama’s middle finger ran the length of his lower lip as he wiped away at some fictional annoyance, exuding the confidence of a man satisfied that he had evaded notice.

With the gum now firmly planted between the First Molars, Obama demonstrated all the slow-paced gum chewing prowess of a wannabe class clown ...

Obama has clearly perfected the technique, matching the clenching of his jaw with the rhythm of the speaker, feigning a sense of presidential concern.

No effort was made to reach out to the White House for comment.

A masterpiece, ladies and gentlemen. Well, gentlemen at least.