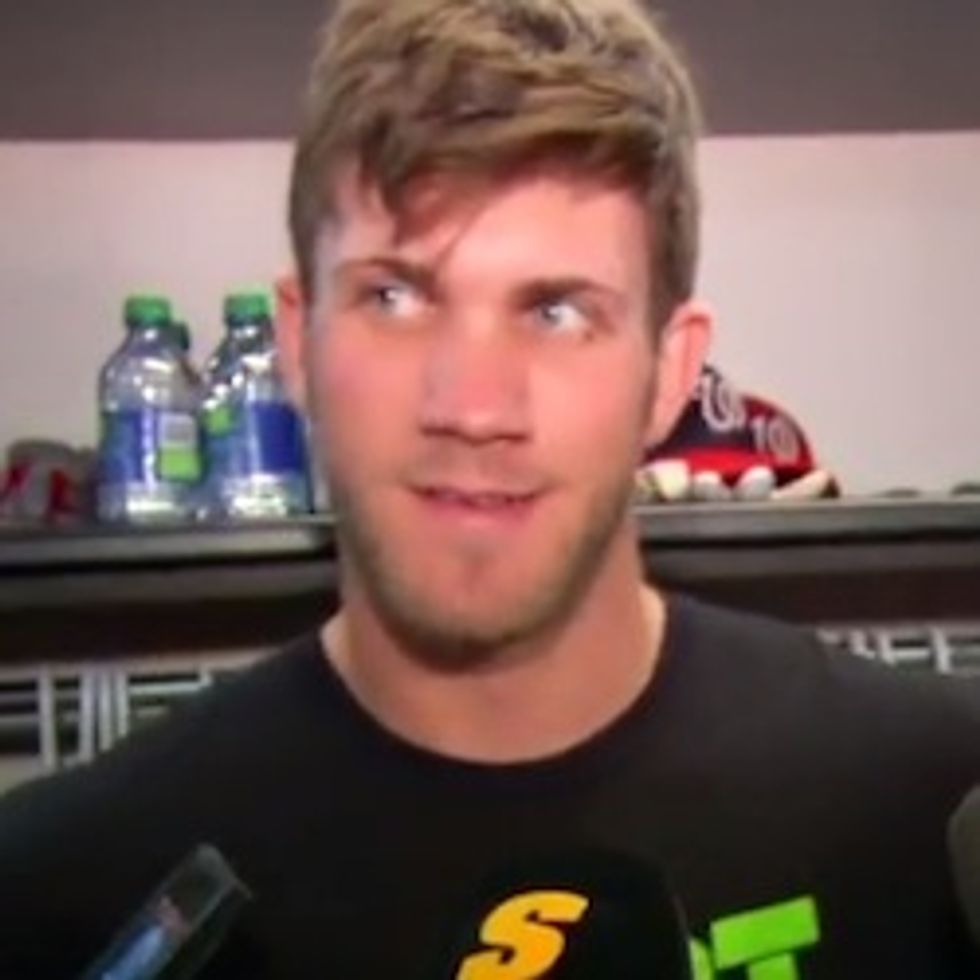 Whoever the Daily Caller's managing editor is, probably "Cactus Joe" or some such, made a pretty amateurish pacing error today. Trolling the president with a dumb question and then lying about it is great "content," yes, but not if you run it on the same day that you're running the most profound insight into political theory since Plato/Jesus. Now it's buried right before the weekend, fools! But that's okay, we'll do our part to help it go viral anyway. Columnist Mark Judge, who recently had his bike stolen by anunknown suspect and then decided that he didn't like black people in general, has a few thoughts on baseball. How does baseball intersect with politics today? In the form of 19-year-old Nationals player Bryce Harper, the subject of "Bryce Harper, conservative hero."

This became clear to me on May 26 of this year.

What happened on May 26 of this year, the year Two Thousand and Twelve?

The Nationals were playing Atlanta, and in the fifth inning Harper, with his team leading by two, singled to right.

The ball was hit to Braves right fielder Jason Heyward.

Heyward strolled up to the ball as if he were walking to the corner for a paper.

Just like he's getting the papers, great. And then what happened?

Harper promptly headed for second base.

The second base, this is the one for which he headed?

Heyward suddenly woke up and fired to second base, but too late.

Smart baserunning decision from Bryce Harper, you're right. Thanks for sharing. He sounds like an exciting baseball player and I look forward to watching him play baseball, now. If you don't have anything else to add--

Heyward’s bungle showed a complacency, if not indolence, that Harper threatens to destroy, but it also could be a metaphor for the collapse of the old liberal order.

And how could it be a metaphor for the collapse of the old liberal order, Mark Judge? Because -- and no disrespect meant, Mr. Judge, you're a great writer who's helped us see the light on numerous occasions; when a person of unknown race stole your bicycle and you appropriately blamed the 12.5% of the national population who are African-Americans, we totally "saw what you were getting at" -- because it seems sort of strained, to be honest. Like you're just going to say "DERP DERP the lazy outfielder is like a UNION THUG TEACHER or MAYBE OBAMA" for your explanation. Sorry, that's over-the-top and condescending. Whatcha got?

Heyward was like one of those public school teachers who, because they are a union member, can’t be fired and so are relegated to the “rubber room” to sit and read the paper and gather a check for the rest of their lives. Or even Obama, who went from Hawaii to Harvard to the White House and never seems to have had to slide head-first into a base his entire life.

You can read the last 3/4 of the column at the media outlet that published it and actually wanted people to read it, The Daily Caller.