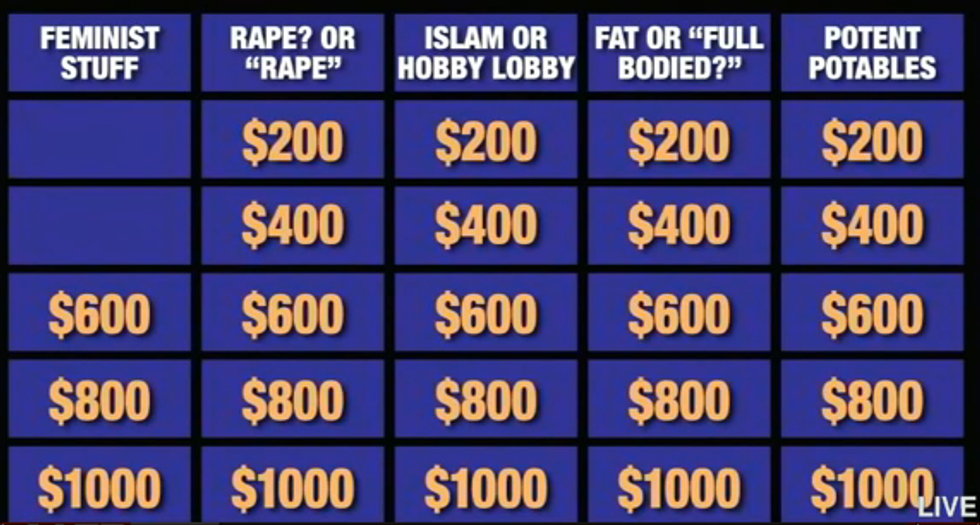 Here's a thing that exists! Dana Loesch has a teevee show on Glenn Beck's cable/internet channel, and she does hilarious rightwing comedy on it! Remember how dumb feminist ladies thought that Jeopardy! was a tad sexist when it suggested that women spend all their time dreaming of a new vacuum cleaner? Well, Dana and her crack team of writers (we assume there are writers?) couldn't wait to mock how dumb feminists are for hating the family and housework and everything that is right with the world, so they made their very own Jeopardy! sketch, with clues like this:

"A person, often female, that chooses to stay home and raise their children."

Don't be silly, the answer isn't "a mother," it's "A traitor to women's rights," haw haw haw! The whole thing is every bit as hilarious as that!

Frankly we're offended: as longtime Jeopardy! fans (you can tell, because we include the exclamation point), we are really torqued off that these morons don't even try to get the format right. Except for once or twice, they don't even phrase their answers in the form of a question, for godssake. Oh, and then there's the tiny detail that the "comedy" is ham-handed and badly timed, and not even up to the standards of an SNL sketch that might run after "Weekend Update"... during the infamous sixth season. Is funny rightwing comedy impossible? Theoretically, any viewpoint should be capable of producing comedy, but as of yet, we haven't seen it.

[The BlazeTV via Reading Is For Snobs]