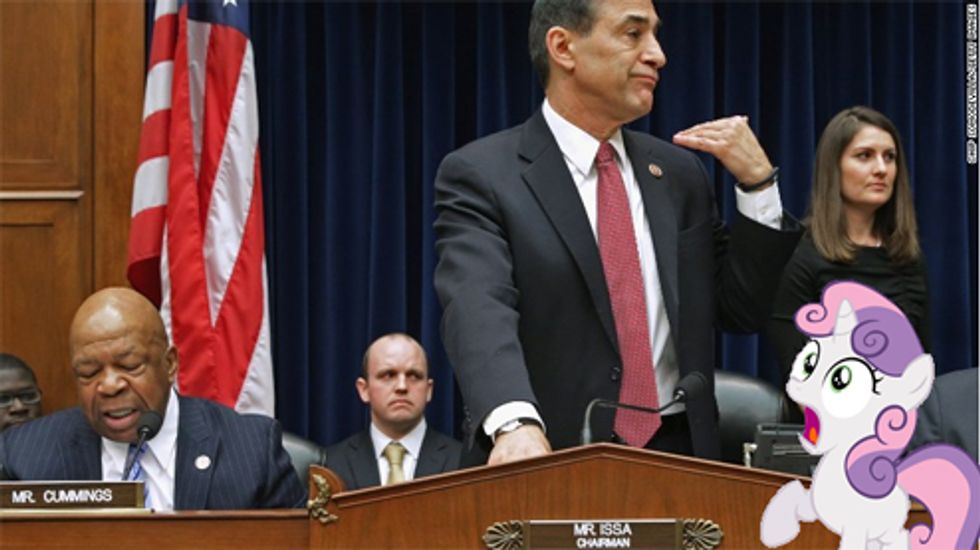 Hey, everybody, Darrell Issa hasapologized for cutting off Elijah Cummings's mic at that hearing the other day, so please move on, nothing left to see, all is well. OK, all but the part where, on the very same day, Issa went on Fox News to tell Megyn Kelly that Cummings had thrown a "hissy fit" and that his anger at being denied the chance to speak was nothing more than a "pre-staged event" -- we'd love to know why he thinks Cummings knew in advance that he'd be a dick, actually. Ha-ha, that is a joke because it is Darrell Issa after all!

In any case, it's all cool, really, because he apologized about the mic.

The multiple Darrell Issas -- however many copies there are -- were very busy the last couple of days, and they had a plan. On Wednesday, Issa told Roll Call that Cummings was the one who really needed to apologize for his rudeness in acting like the ranking Democratic member of the Oversight and Government Reform had any right to speak in a meeting of the committee. Just two days before he kinda-sorta apologized, Issa was calling for House Democrats to punish Cummings:

“I think he should be dealt with by his leadership,” Issa said of Cummings. “You know the decorum of the House, the adjournment was appropriate, we had dismissed the only witness and his conduct was inappropriate and rather shocking.

“He owes me an apology,” Issa said.

And then in an interview with UT San Diego published Thursday afternoon, Issa said he had apologized very very sincerely to Cummings, telling the paper, “Mr. Cummings is a member of Congress who works very hard for his constituents" and calling the whole thing an "unfortunate incident." He acknowledged, a bit condescendingly, that he maybe could have handled the situation better:

“I could have offered to reopen the hearing and allowed him to make a second statement,” he said. “As chairman, I should have been much more sensitive to the mood of what was going on, and I take responsibility.”

While no House or committee rules were broken, Issa said it’s his responsibility when a committee member is upset.

Also on Thursday -- though nobody has figured out yet whether it was recorded before or after the apology -- Issa taped an interview with Fox's Megyn Kelly in which he insisted that he was absolutely right to shut off the microphones and leave, and that Cummings's ire was nothing but a “pre-staged event.” Kelly, in a moment of lucidity, suggested that letting Cummings "have his couple of minutes to rip on you" would have been far less damaging to Issa's reputation than stomping out of the hearing; Issa said, sure, maybe, but "the fact is, I did things according to the rules, I followed a script, and then Mr. Cummings just decided to have quite a hissy fit."

Issa also hinted that Cummings had accused him of being a racist, which of course doesn't resemble a single thing Cummings said.

But for heaven's sake, why is everyone making a big deal out of this? Issa apologized, for godssake, so shut up, will you?

Follow Doktor Zoom on Twitter. Just be sure to apologize to him if he deletes your tweets.