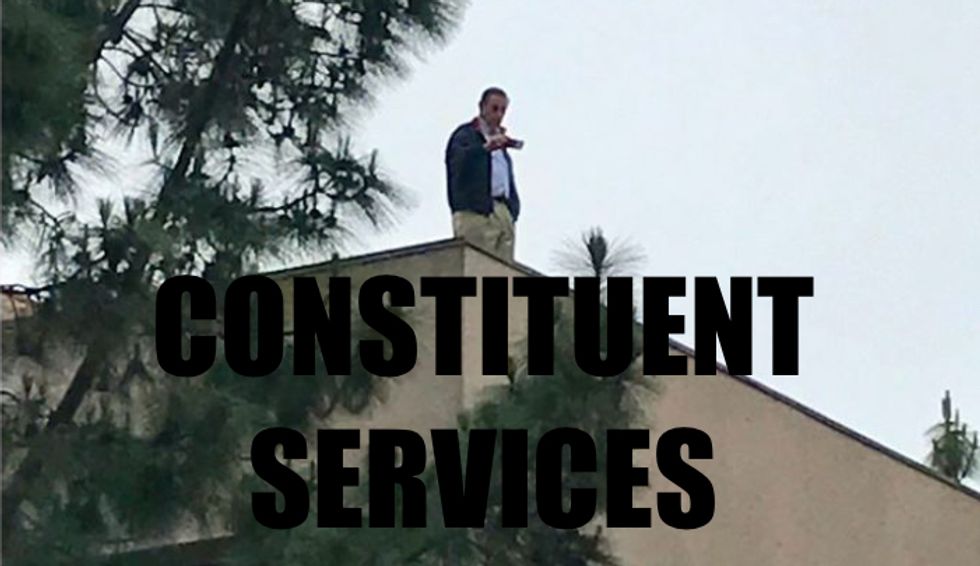 Is Darrell Issa about to NOPE out like a common Palin? Is the richest man in Congress wishing he could just go home and roll around in a pile of money? We are just asking if Darrell is exploring alternative lifestyle choices like his buddy Jason Chaffetz. Because after yesterday, we are starting to think Darrell Issa needs to take a mental health day. Or maybe 1,000.

Every Tuesday, 300-800 protesters converge on Issa's office to show their appreciation for Issa's brave vote to pass the Republicans' stinking turd of a healthcare plan. This week, the Congressman is home on recess preparing to host a town hall this Saturday -- which promises to be LIT!

First Darrell wandered outside to do a little constituent services with his adoring fans.

Sadly, these were not grateful Californians coming to congratulate him for doing such a fantastic job at the Fast and Furious hearings.

Darrell did manage to find one friend in the crowd, whom he literally rewarded with a piece of cake.

Then Issa asked the protesters if he could borrow their microphone, to which they replied, LOLOLOLOL!

Ellen Montanari, who organizes the weekly rallies and often leads the crowd chants, said she tried to shake Issa’s hand and was rebuffed.

Montanari said Issa told her “step away, you are a protester” and that she replied “I am a constituent.” She said he then made “disparaging remarks” about the protesters and the signs they carry.

Montanari said it was “very clear that he was not interested in listening,” so she decided not to invite him to speak to the crowd.

“He was so rude to me, and I wasn’t going to subject the people at the rally to that rudeness,” she said.

At which point, the good Congressman went inside to make some phone calls to a reporter at the San Diego Union Tribune.

As one does. If one has lost one's shit. And the will to live.

Then Issa went up to the roof to try out his phone's spiffy panorama feature.

It really picks up the lettering on the "Shame" and "Issa, Google Compassion" signs!

And the Washington Post got all up in Darrell's grill, too.

This isn't the first time Darrell Issa has looked down upon his constituents -- just the most obvious. Help us win: https://t.co/WLBYaPIedPpic.twitter.com/k0XjlFldrO

And then Mike Levin, the environmental attorney running against him in 2018, was OMG! SO MEAN on Twitter.

That guy is EVERYWHERE. You know he's coming to that Town Hall on Saturday -- he always does.

Darrell Issa just announced a fake, invite-only "town hall". Maybe because this happened at his last one. Join us: https://t.co/WLBYaPIedPpic.twitter.com/EaWFrYBJRe

Your Wonkette will never NOPE OUT on you! We're always here! Show us some love!