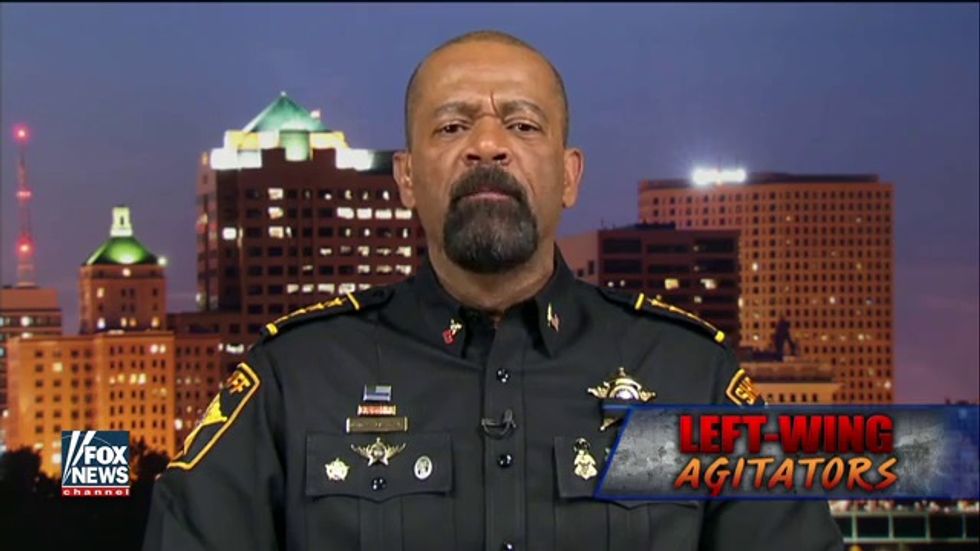 Fox News commentator, rightwing icon, shameless self-promoter, and occasional Milwaukee County Sheriff David Clarke has resigned from that last job, issuing a statement saying, "After almost forty years serving the great people of Milwaukee County, I have chosen to retire to pursue other opportunities." Let us take a moment to contemplate the kind of world in which there actually are "other opportunities" for someone who keeps letting people die in his jail.

Clarke's letter of resignation was remarkably terse for such a great public servant:

Yes, of course: Even his official stationery has self-aggrandizing bling on it.

Clarke has long been far better at saying outrageous shit for the sake of getting his name in the media, like when he warned Black Lives Matter would inevitably team up with ISIS:

You think the Women's March was 'peaceful'? What about these documented incidents of taunting and glitter assaults?

Also that time when Clarke declared the Women's March on Washington, which brought hundreds of thousands of protesters to the nation's capital and didn't involve a single arrest, represented "a total collapse of the social order." Clarke was pretty sure it was a riot anyway, since it involved people who didn't like Donald Trump, and also the most extreme, violent Leftist taunting he'd ever seen in his life:

Also, someone else was brutally assaulted by glitter, yet police were suspiciously absent.

New York magazine's Jonathan Chait summarized some of Clarke's accomplishments in the field of law enforcement earlier this year when Clarke announced he'd be taking his incompetence to the next level and joining the Department of Homeland Security in some capacity:

He oversees a prison that is notoriously brutal. Four people have died of mistreatment and torture in his custody. One newborn baby died while its mother was shackled during childbirth; another prisoner died of dehydration, after the water in his cell was shut off for seven days. In 2013, one of his deputies ran a traffic light and T-boned the car of a civilian driver, who was badly injured. Clarke’s department charged the driver, who was actually sober, with drunk driving in order to cover up its own culpability.

Clarke eventually "rescinded" his acceptance of the DHS job offer, apparently because his paperwork involved "significant delays that contributed to his withdrawal,” as a source told the Washington Post in June. But it looks like maybe he has his papers in order finally, since Politico reports Clarke is headed for some kid of job in the White House, "according to two sources familiar with the matter." Whatever he ends up doing is likely not to be anything requiring Senate confirmation, because of all the baggage Clarke would be bringing with him. Then again, as Yr Editrix sagely noted in the Sekrit Chat Cave, "Why does everyone keep saying Clarke is unconfirmable? Is there ANYONE they haven't confirmed yet?" Point taken.

The Milwaukee Journal Sentinel cites "sources close to the sheriff" who said Clarke isn't headed for Washington, but is instead looking for "opportunities outside of government that support the Trump agenda and keep Clarke in the public eye." That sounds about right.

Milwaukee County Executive Chris Abele was not terribly heartbroken by the news of Clarke's resignation, saying the county now will be able to get a sheriff who is "more interested in integrating with the rest of the community and maybe more focused on solutions and allies than enemies and fights." Looks like Chris Abele doesn't want America to be Great Again.

Whatever role, if any, Clarke plays in the Trump administration, it's likely to involve advocating for maximum mayhem and aggressive displays of force for its own sake, just like Trump himself favors. Clarke notoriously sent sheriff's deputies and a search dog to badger an airline passenger at the Milwaukee airport after the guy looked at Clarke wrong on the plane. The federal civil rights lawsuit filed by that passenger is set to go to trial in January. When people said maybe that was an excessive response to a guy looking at him wrong, Clark explained why side-eye should be met with maximal police response:

So maybe Trump's looking for someone to organize his rallies who really will make sure any troublemakers are carried out on stretchers.