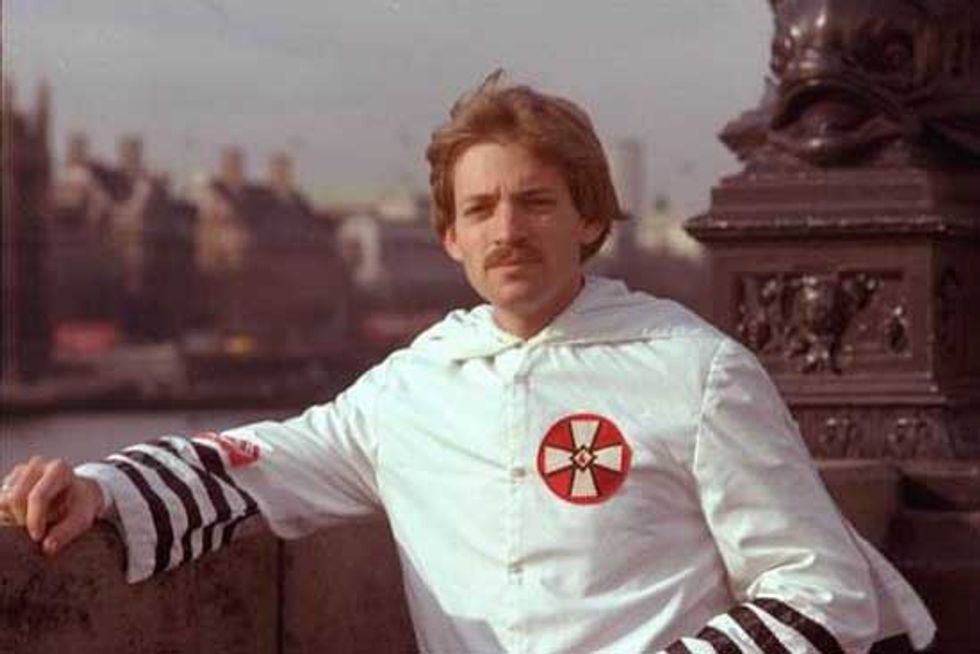 Since everything else from the '90s is back -- Donald Trump, Hillary Clinton, Pokémon -- it only makes sense David Duke would rear his ugly head again, not that he's been keeping a low profile this year anyway. The former KKK grand wizard says he's giving serious thought to running for the congressional seat held by Steve Scalise, the Louisiana Republican who found himself in a spot of bother when it was revealed he'd spoken in 2002 to a white power group run by Duke. Scalise has insisted he had no idea that the "European-American Unity and Rights Organization" was a bunch of white supremacists. And maybe he had a point -- one bunch of angry white Louisianans looks a lot like any other, and nobody was actually wearing a hood. He might also have just thought they got his name wrong in the program and were shouting, "Hi, Sig!"

But Duke's potential run has little to do with that 2014 controversy, which reminded everyone that Scalise had once promoted himself as "David Duke without the baggage." True, Duke can't see why anyone would rather settle for an imitation when they could have the pale original, but mostly he thinks Donald Trump's candidacy and the current stew of racial animus mean America is ready for a real-deal former Klansman in high office.

It's not quite a done deal yet -- Duke told the Daily Beast he's "very seriously set up an exploratory committee" and expects to make a decision soon, ahead of the July 22 filing deadline. Duke sees it as his duty as a defender of besieged white assholes everywhere:

Duke said the killing of five white police officers in Dallas by a black militant pushed him to the brink of running.

“I don’t take any satisfaction in the fact that I was right, but I have been right,” he said. “Unless European Americans stand up, they are going to lose everything they care about in this country” [...]

“There are millions of people across the country who would like to have me in the Congress. I’d be the only person in Congress openly defending the rights and the heritage of European Americans,” he said. “We are on the offensive today. There’s no more defenses.”

In other words, thanks in large part to Donald Trump and the "alt-right" (it's Luntzian for "white power") morons who've been making overt racism fun again, Duke figures he can make a few bucks even if he never comes anywhere close to winning. There's a receptive market for fear and hate, and he wants in.

And yes, Duke does still nurse a grudge against Scalise for having made such a show of disavowing him after the association with Duke almost (but never quite seriously) threatened his position as House Majority Whip, the third-highest position in the House of Representatives. Sure, Duke is sore:

Scalise’s denouncement and his vote to ban Confederate flags in Veterans Administration cemeteries has earned him Duke’s ire.

“He crawled on his hands and his knees to the black caucus. This should not stand,” Duke said.

Well of course not, what with the crawling and all. Man still has a mastery of metaphor. In a more racially aware world, Duke says, he wouldn't have to suffer the indignity of running for office, especially since the wrong people are still allowed to vote. No, he should be Donald Trump's running mate, since "I’ve said everything that Donald Trump is saying and more,” although he's perhaps unclear on how the "and more" might be a problem even for Donald Goddamned Trump.

Alas, despite their unspoken love, Duke knows he's unlikely to have even as much of a chance at the veep slot as Newt Gingrich, who Duke calls a “total sellout cuck" for his recent remarks that white people don't understand the discrimination faced by black people. Isn't that sweet how he's picked up on the lingo the hip young racists have adopted? Duke understands that Donald can't consummate their forbidden racist romance because the political elites are controlled by Jews and blacks and such. But a Klansguy can dream:

“I would be a better pick,” Duke said. “I had a perfect Republican voting record. If he had me as a VP he would have a life insurance policy. But again, I don’t see him doing that. That’s just a fantasy.”

Well of course it is. And so is his pretense that he could win election to Congress despite being a walking synonym for irrational hatred:

“We have social media and the Internet today puts me at an even footing with you. The truth is going to get out one way or the other. I demand some fair treatment. The media can demonize me all they want. They can lie about me. They can say whatever they want about me. Things are changing in this country,” Duke said, his voice rising to a crescendo.

“We’re in a revolutionary spirit.”

Demonize him? Lie about him? Don't be silly. All the media has to do is quote David Duke and his slimy little online bigot buddies accurately, and he'll goosestep himself right back into obscurity until the next time he thinks he can grab some column inches.