David Duke Thinks Donald Trump Could Tone It Down A Notch 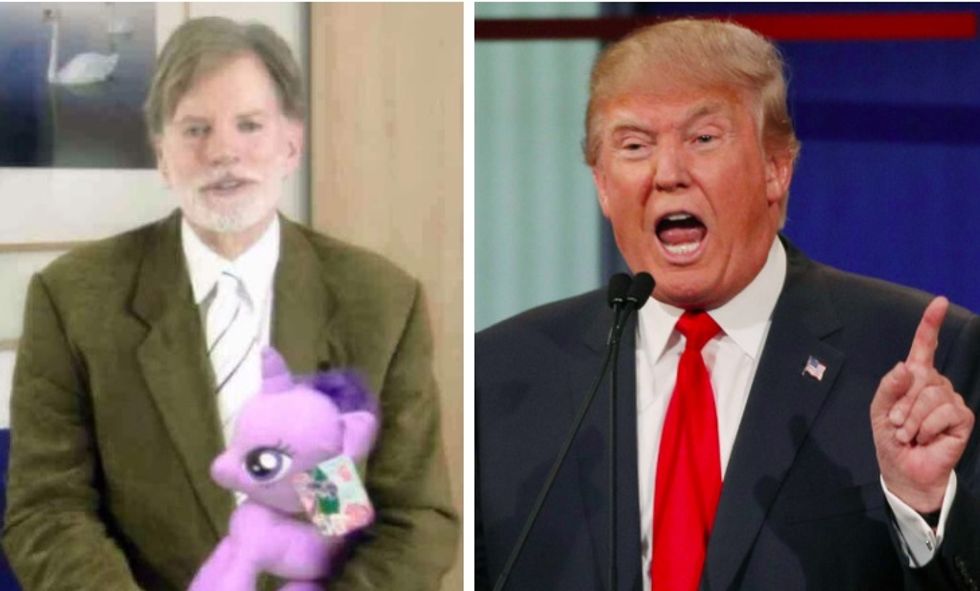 No idea why someone would 'shop a Twilight Sparkle plushie into a David Duke pic. She's no lavender supremacist.

Here's a little tip for fetid vomitsack and Republican frontrunner Donald Trump: When former KKK Grand Wizard David Duke says you're a bit over the top, it might be time to consider dialing things back just a skosh.

Duke shared his thoughts on Trump in a YouTube video dated Dec. 17 and labeled "Fox Interview" -- although it's clearly not from Fox News. Maybe Duke simply thought the unidentified interviewer was a fox or something. He explains that he's pretty impressed with this here Trump fellow, although Duke can't bring himself to endorse Trump since Trump supports Israel, the big liberal squish.

We aren't quite sure what aspects of Trump's agenda are more radical than Duke's; the Klansman did, after all, endorse Trump's call for a completely legal and workable ban on Muslims entering the U.S. Maybe Duke simply means Trump shouts more than he does. So, what are the pros and cons of the Trump phenomenon, Mr. Wizard?

It’s positive in the fact that there’s less political correctness and people are getting the courage to speak out. At the same time, I’m concerned that I don’t agree with all of his policies. I certainly don’t support the idea of America supporting the nation of Israel, which has committed terrorism against the United States of America, with the Lavon affair and the attack on the [USS] Liberty and the incredible treachery and the damage that was done by Israel with its spy Jonathan Pollard, who basically caused the death of hundreds of our operatives. I think, and I see this Jewish extremist, this basically Zionist, minority having enormous influence.

One thing about your career anti-Semites: in addition to seeing The Jews everywhere, they never forget a grudge, whether it's from 1954,1967, or 1985. If only normal American humans knew that much about history, even the parts where The Jews weren't scheming to destroy us from within. (Ha! ha! That's funny, since there are no such parts of American history!) We have a feeling that if you asked Donald Trump about the USS Liberty, he'd say he's in favor of sending it to attack ISIS and take their oil.

So while Trump's unwillingness to cut all ties with Israel is rather off-putting to the KKK guy, Duke nonetheless sees Donald Trump as Good for the Whites overall, since maybe he'll stop all the immigrants from destroying "endangered" white people in America, whose culture is vanishing thanks to all the brown people encouraged to come here by The Jews. He explains this isn't White Supremacy; it's simply a matter of "human rights" for Euro-Americans, who are sick and tired of being called racists simply because they want to keep America white:

I think the appeal of Donald Trump is the fact that he’s giving voice to a lot of people, including, and I think he represents the rights of all people in this country, but he actually includes the values and the interests of the European-American majority, and I think that’s the underlying appeal behind his popularity.

Not that Donald Trump minds getting praised by David Duke; as we've noted before, Trump simply recognizes that he's so yoogely popular that he doesn't need David Duke's support:

Asked whether he would repudiate the endorsement, Trump said “Sure, I would if that would make you feel better.”

[contextly_sidebar id="ZEt6BQFFAbMZ5o487LWpGxjldsA54YDN"]Since the video was posted several days before Trump talked about Hillary Clinton getting "schlonged," it's not clear whether David Duke's enthusiasm for Trump has been diminished at all by Trump's clumsy embrace of Yiddish. We're sure we'll eventually hear more about it.

Even if you skip over most of the video, we do recommend that you check out the bit at 16:45 where Duke is interrupted by his tiny dog barking. There's something hilarious about the idea of the defender of White Nationalism having an itty bitty yappy dog.