David Mamet: David Mamet Needs Guns Because Of Affirmative Action And Such 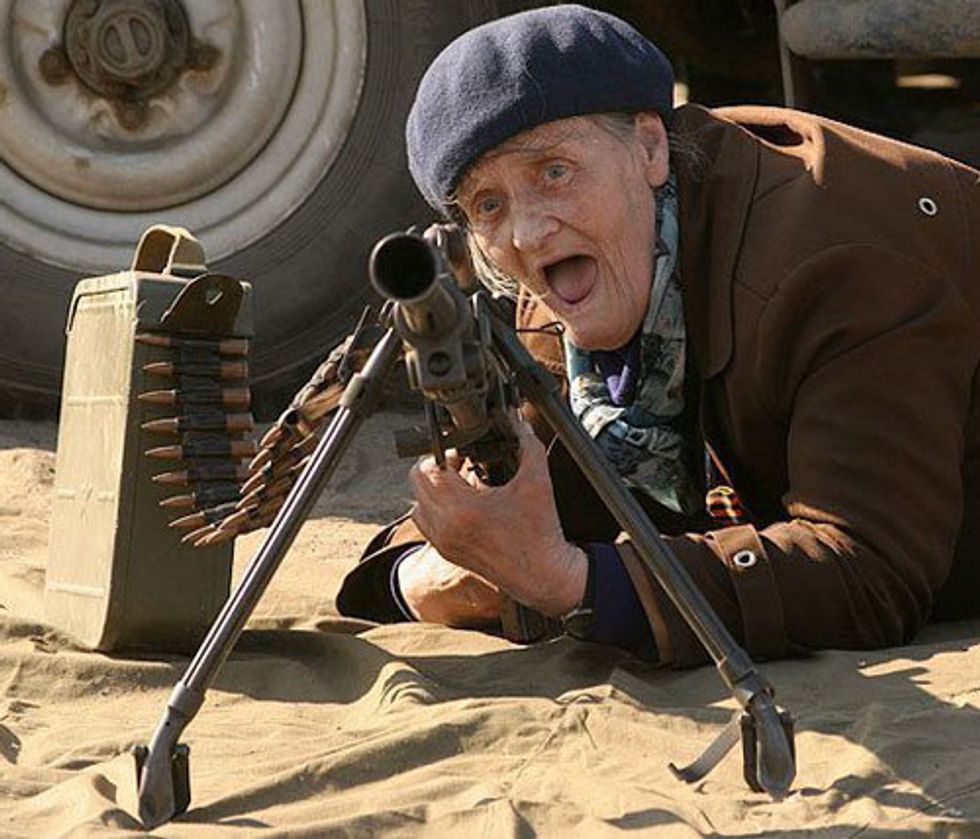 You likely remember David Mamet for writing a bunch of pretty good stuff that never quite got over the top to greatness, likeWag the Dog and State and Main. If not that, then you should know him for having sex with some lady to create Zosia Mamet, who plays Shoshanna on Girls. (Shoshanna is the one that when you and your friends cast yourselves as one of the Girls' leads, nobody wants to be. This is not Zosia's fault, it's just that not many people want to be the neurotic near-virgin who smoked crack and walked around Bushwick without pants on.)

Anyway, David Mamet at some point had a break with reality (psst, it's when the black guy got elected President) and decided that he would be the Hollywood elite former Democrat who broke ties with the party after the iPad came out but is really incensed about Chappaquiddick and the New Deal. Now, David is super pissy about guns. After talking about bureaucrats and Marxism, David states:

As rules by the Government are one-size-fits-all, any governmental determination of an individual’s abilities must be based on a bureaucratic assessment of the lowest possible denominator. The government, for example, has determined that black people (somehow) have fewer abilities than white people, and, so, must be given certain preferences. Anyone acquainted with both black and white people knows this assessment is not only absurd but monstrous. And yet it is the law.

What does this have to do with gun control? Fuck if we know. But, yes, dumb Negroes.

After like another two hundred paragraphs, David finally gets around to talking about goddamn guns.  No, really. He takes 941 words in his piece about guns to mention guns in any way, shape or form.

Many are opposed to private ownership of firearms, and their opposition comes under several heads. Their specific objections are answerable retail, but a wholesale response is that the Second Amendment guarantees the right of the citizens to keep and bear arms. On a lower level of abstraction, there are more than 2 million instances a year of the armed citizen deterring or stopping armed criminals; a number four times that of all crimes involving firearms.

The Left loves a phantom statistic that a firearm in the hands of a citizen is X times more likely to cause accidental damage than to be used in the prevention of crime, but what is there about criminals that ensures that their gun use is accident-free? If, indeed, a firearm were more dangerous to its possessors than to potential aggressors, would it not make sense for the government to arm all criminals, and let them accidentally shoot themselves? Is this absurd? Yes, and yet the government, of course, is arming criminals.

The ironclad logic and gorgeous writing on display here explains why so many love David Mamet's last classic film, Redbelt, which was pretty much Bloodsport with a black guy. You see, "the left" (the National Institutes of Health) has a "phantom statistic" (a real statistic), and so the obvious argument deriving from the increased risk of firearms accidents in homes with firearms is to arm people who want to actively use firearms to commit crime, because they are the same as your average idiot who shoots himself with a gun at a gun show because he doesn't know how to load the gun he just bought.

Anyway, David has proposals! Ideas! Things so brilliant in their obviousness that to disagree with them is to behave like some character in a David Mamet script that does something stupid!

What possible purpose in declaring schools “gun-free zones”? Who bringing a gun, with evil intent, into a school would be deterred by the sign?

Ah, but perhaps one, legally carrying a gun, might bring it into the school.

We need more armed citizens in the schools.

Technically speaking, if a school isn't a gun free zone, then wouldn't a mass shooter be legally carrying a gun into a school up until the point he shot a child in the head?

Why not then, for the love of God, have an armed presence in the schools? It could be done at the cost of a pistol (several hundred dollars), and a few hours of training (that’s all the security guards get). Why not offer teachers, administrators, custodians, a small extra stipend for completing a firearms-safety course and carrying a concealed weapon to school? The arguments to the contrary escape me.

Dear custodians: we know that we basically entrust you to clean up vomit, urine and the various bits of detritus that children leave everywhere, but could you also carry guns at all times to maybe shoot someone. Don't worry, all the teachers and administrators you aren't particularly familiar with will also have guns, so someone will hit the shooter. Or *a* shooter. You'll probably hit someone, and most likely won't be found liable.

Fuck it, just shoot whoever you see with a gun that's anywhere near kids.

Lastly, background checks are dumb, because of bureaucrats and Marxism.

Anyone applying to purchase a handgun has, since 1968, filled out a form certifying he is not a fugitive from justice, a convicted criminal, or mentally deficient. These forms, tens and tens of millions of them, rest, conceivably, somewhere in the vast repository. How are they checked? Are they checked? By what agency, with what monies? The country is broke. Do we actually want another agency staffed by bureaucrats for whom there is no funding?

In sum, we should give public employees in schools money and entrust them with guns to protect our children, but stop public employees from doing background checks on people who purchase guns because that would cost money. Because Marxism.