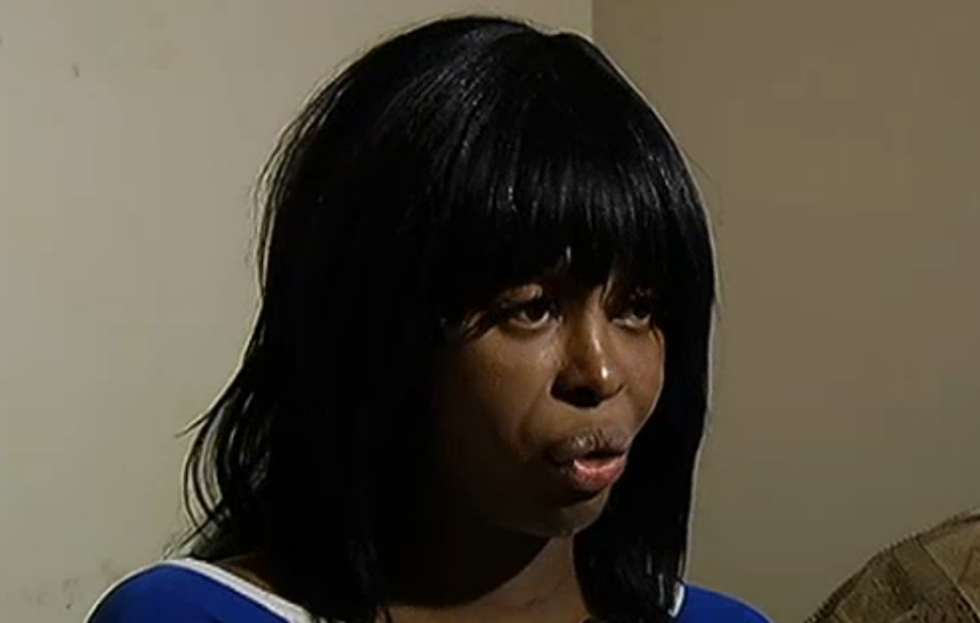 Hide your kids, hide your wives, especially if they are transgender, because America's stupidest vigilante brigade has been activated. According to NBC Washington, a transgender woman named Ebony Belcher was at a Giant grocery store in DC, when she committed the greatest crime known to trans people -- she needed to pee. So she went in the ladies' room and OH HOLY FUCK WHAT IS THIS SECURITY GUARD DOING?

The officer came into the restroom and told her to get out, according to Belcher.

"She opened the door and came in and started calling me derogatory names," Belcher said.

She said the officer put her hand on her shoulder and arm, grabbed her and pushed her out of the store.

Belcher said the guard told her, "You guys cannot keep coming in here and using our women's restroom. They did not pass the law yet."

That security guard lady seems nice. We bet she saw some asshole on TV talking about men in dresses coming into lady restrooms to do naughties to OUR WIVES AND DAUGHTERS, and thought, "Oh goodness, this is the greatest moment of my rent-a-cop life, my true test of bravery in the face of danger!" So she roughed that trans lady up RIGHT GOOD and got her out of that potty. Crisis averted, threat neutralized!

We are guessing Ms. Belcher still had to pee after this was all over. Did we mention how she has Parkinson's disease?

So, it is a Good Thing that the security guard was arrested. We hope she has some time while in custody to think about what a fucking dick she acted like, and maybe find Jesus.

[wonkbar]<a href="http://wonkette.com/601869/crazy-christian-lady-sick-and-tired-of-satan-raping-her-babies-at-target"></a>[/wonkbar]But the fucked up thing about this whole transgender potty panic -- in North Carolina, at your local Ter-get, and all the other places -- is that violence against trans people -- especially trans women of color -- is already out of control, and it has been for a long time now.

All you have to do is visit the Google, and you will learn statistics like these:

The murder rate of people who are lesbian, gay, bisexual, transgender, queer, and HIV-affected (LGBTQH) is at its highest, according to a [then-recent] 2011 report from the National Coalition of Anti-Violence Programs (NCAVP). The report also shows that transgender women, people of color, and youth and young adults are at a disproportionately high risk of being victims of what the NCAVP terms hate violence.

[wonkbar]<a href="http://wonkette.com/600596/north-carolina-governor-fixes-gay-hatin-law-by-not-fixing-sht"></a>[/wonkbar]And goshdarnit, those reports came before the American Family Association, North Carolina and the idiot farts on Fox News decided to really double down on how being nice to trans people means you or your kids might get raped.

[wonkbar]<a href="http://wonkette.com/601602/attorney-general-loretta-lynch-so-excited-about-kicking-north-carolina-in-the-ass"></a>[/wonkbar]Thank the heavenly beings that, for the first time in U.S. American history, we have a president and an attorney general who actually give a shit about this issue, and who are willing to stick their feet ALL THE WAY UP THE ASS of the dumb bigots who perpetuate this sort of crap.